I was a big fan of my new iMac G5 17″ computer, but after 30-40 minutes of running the iMac in a room with a 78F ambient the thing would freak out and lock up. After trying to figure out the issue I downloaded a software utility called the Bresink temperature monitor to see what my Apple G5 was running at. I was shocked when the on-screen display showed that the CPU was at 170+ Degrees Fahrenheit. It turns out that my Apple computer had too much heat in the small all-in-one cabinet space to run properly. 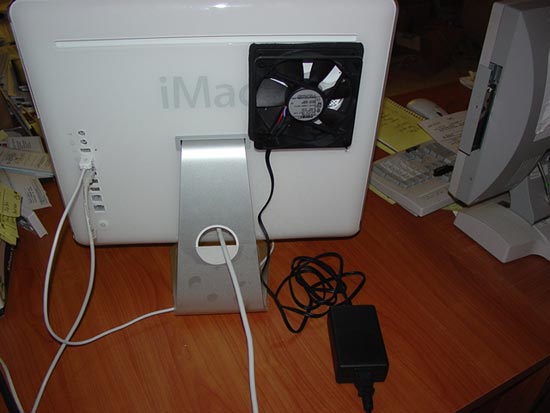 To fix the heat issue I tapped into the existing ducting just under the plastic and mounted a Papst 120mm fan with a flow rating of 50 cfm to help solve the problem. Since the fan is externally mounted I chose to power it by an external adapter. After marking the spot I want to install the fan I drill the plastic very carefully, like a bowling ball almost, but I use a hole-saw chucked in a drill press. This is done to keep the holes fromcracking the plastic and to keep from hitting the metal ducting just 1/4″ behind the plastic. The fan is a premium Papst 120mm unit, it is held to a hand-cut gasket cut from mouse pad rubber and held in place with nylon tie wraps for minimal noise. The mod is safe to be always on, as the fans are 30,000+ hours MTBF (claimed by Papst), so the fan should last for years. Since the fan is wired to an external power adapter the fan will have a constant noise pitch, not variable whirring up/down (quite annoying) which can be found on some temperature controlled fans.

Before the fan mod I was seeing a range of 145^F at idle to 170^F under load, a minute above 175^F would often lock up the system and only the power button would shut it down. The Apple Biltmore guys tested my unit for 24 hours, in 74^F ambient, and said it was working perfectly. They could not or chose not to test it like I was using it, at around 79^F ambient. I was also seeing 130^F plus on the hard drive, and being a technician for video projectors I just knew that this high cabinet temp would have bad implications for the long haul; midplanes are $1200 out of warranty! The fan takes the hard drive temp down to 115^F or so, even after several hours. I was willing to maybe sacrifice the warranty on my own unit for what will almost certainly translate to enhanced reliability. Below is a screen shot of the temperatures after the mod was installed.

It is unknown if this will void your warranty or not, so if you do this on your own please keep this in mind. I am in the process of show Apple this fan mod and ask if the warranty will remain intact for all users with the mod installed. Since this mod is not drawing power from the iMac and is not blocking the existing vents I do not see why Apple would disagree. Putting the top down on my car does not void that warranty if you get my meaning!

If you do not want to attempt this mod on your own or it may be something we may offer this to users for around $199 plus Fedex shipping if there is sufficient demand. At this price you will get the fan, external power adapter, your case cover drilled, and can sit back and have a cold one while Tim and crew do it for you.

Written By: Tim at E-Tech Systems Phoenix
Send inquiries to: ehometech at earthlink.net

This article was written by Tim Martin, who is not a staff member on Legit Reviews and the mod is done at your own risk. If you are not comfortable with a drill and cutting on your case please contact Tim or ask questions on the forum thread linked below.