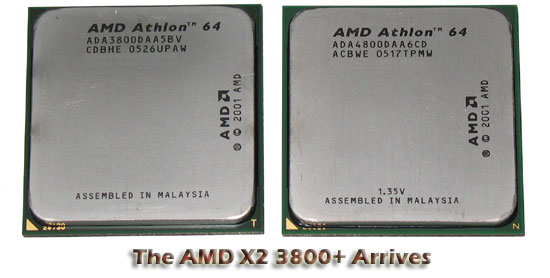 Advanced Micro Devices (AMD) has been leading the dual core performance race when it comes to gaming and raw performance levels, but they have failed to release a dual core processor at an affordable price range. Prior to today the low end dual core processor was the AMD Athlon 64 X2 4200+ Manchester processor and it comes with a not too low end price tag of roughly $550 US at the time of press. For years AMD processors have been known to be the best deal for computer enthusiasts on a budget since their price points were always lower than their competitor’s — Intel Corporation. Although AMD was first to tape out a dual core processor, Intel beat AMD out the door with their dual core series and in an amazing turn of events the Intel Pentium 4 820 (Intel’s entry level dual core processor) costs ~$236 US when purchased from online retailers.

For a consumer that has been sold on dual core processors the choice between which of the two processor brands to use has been an uphill battle for AMD. The two major factors that are causing issues for AMD are are the facts that Intel’s marketing budget dwarfs those over at AMD, and the entry level pricing that was formentioned varies greatly in Intel’s favor. With AMD’s entry level dual core processor costing more than double that of Intel’s, many consumers simply can’t afford AMD’s Athlon 64 X2 processors. All that changes today with the release of the AMD Athlon 64 X2 3800+ processor. The new X2 3800+ comes at a value packed price tag of $354 US on the day it launches and it will of course go down as the market settles down after the launch. Although it is still one hundred dollars more than the Intel 820, AMD has lowered their dual core X2 series entry level processor down two hundred dollars lower than it previously was, and finally makes it a consideration for the working class (pretty much everyone in America living paycheck to paycheck). 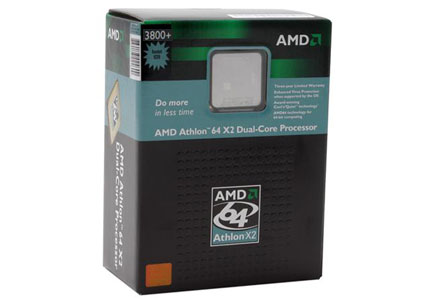 What you may or may not have noticed in that paragraph above is that the 3800+ features a “Manchester” core, not the “Toledo core used in the rest of the X2 line. The difference? The Manchester core features fewer transistors (154M compared to the Toledo’s 233.2M) and a smaller die size (147mm^ compared to the Toledo’s 199mm^2), which also definitely gives it a far better thermal numbers than its siblings (89W as opposed to 110W).

Before we get down and dirty, lets take a look at some specs as compared to Intel’s Pentium D 820 that we covered last month. 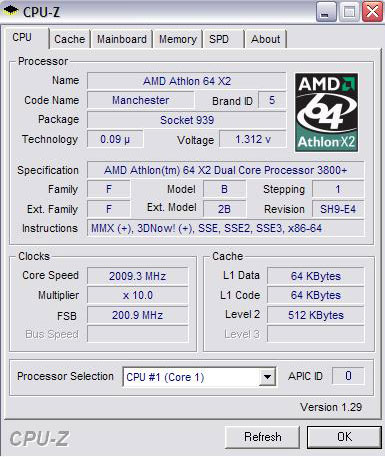 From a purely financial standpoint, the 3800+ still comes in about $90 more than the Pentium D 820. However, the 3800+ has some benefits not found with Intel’s dual core core line, namely the ability to simply throw it in your existing socket 939 motherboard with a simple BIOS update and fire it up. Intel’s dual core line is officially compatible with only the newer i945 and i955 chipsets, but some motherboard makers like AsRock have come out with boards based on the Intel 865PE chipset (AsRock Model #775i65PE) that unofficially support Intel dual core processors.