It’s hard to believe that Apple announced the Apple TV (iTV) back in 2006 and then released their first player back on March 21, 2007. Apple has finally started shipping their second generation Apple TV this week and we got a pair of them that just arrived from Shenzen China today. This player is rather interesting from a cost perspective alone as it retails for just $99. This is a far cry from the original $299 price tag brought by the first generation player. To help cut costs Apple removed the built-in storage feature, but as a result the new Apple TV is a quarter the size of its predecessor and is all black. The new Apple TV is all about streaming data (think Apple AirPlay) and it has built-in 802.11n wireless networking and a 10/100 base-T ethernet port to help keep they 720p content flowing smoothly. Unfortunately, the Apple TV has still has a maximum video output of 720p, which means that you won’t be able to do 1080p streams from iTunes or Netflix. For most people 720p is just fine, but remember the Apple TV supports just HDMI video out only. In fact the Apple TV has just five ports on it: HDMI, power, optical audio, mini-USB (diagnostics only) and ethernet ports. Also remember without a hard drive being built-in, there’s no way to sync content from your computer to the Apple TV, so playback requires a Mac or PC with iTunes 10.0.1 or later to be running to watch anything not coming from the Internet this also includes video content on your networked attached storage server (NAS). We will go more into the details of the player when we review it, so let’s take a look at the pair of players that we just got from Fedex. We’ve been busy taking photos and doing an unboxing video for you, so let’s get to it.

First up is the unboxing video for those that like to check out the packaging and initial set up. We’ll post some pictures and a bit more detail via text after that. 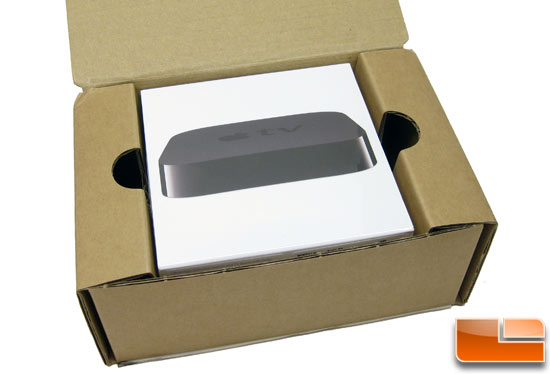 The new Apple TV ships in a box that’s just 7″ x 4.5″ x 3″ and as you can see from the shot above it doesn’t even need a shipping box that big! Apple claims the new second generation Apple TV is 80% smaller than the previous generation and we don’t doubt them on that. The actual dimensions of the player itself is 3.9″ x 3.9″ x 0.9″, and it weights in at just 0.6 lbs. Its no wonder that the Apple TV has been dubbed ‘The Puck’ by many in the IT industry already. 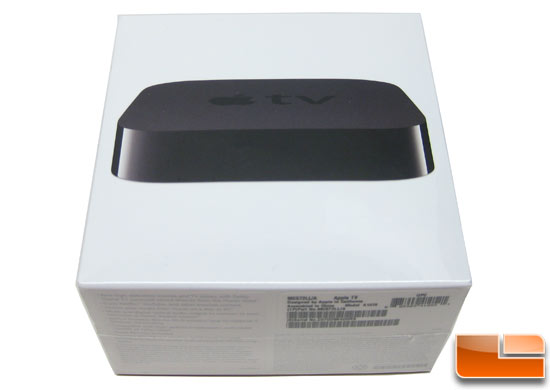 The retail packaging of the Apple TV is minimalistic like normal. Since there isn’t much to talk about here we’ll go ahead and talk about how the Apple TV comes with iOS and that it has already been jailbroken and we should be able to see some interesting apps on the device really soon. We just have to wait for apps to be written for the Apple TV now that it has been jailbroken. If we had to guess a Twitter app will more than likely one of the first apps out the door as who doesn’t want Twitter in the living room? 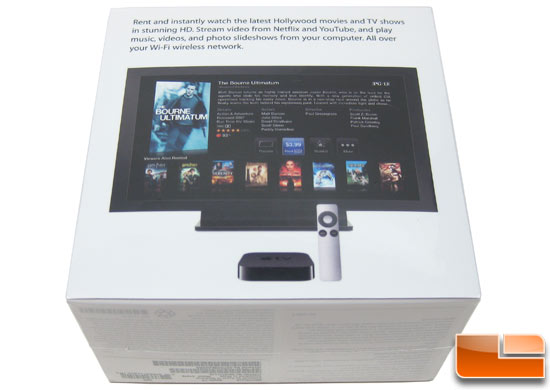 The back of the Apple TV talks about how you can watch HD content and stream video from Netflix and Youtube, music from iTunes or take a look and photos on Flickr. 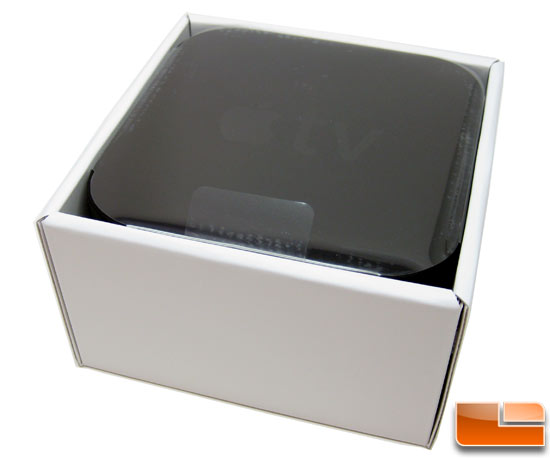 With the shrink wrap and slide the cover of the retail box packaging off you’ll be able to get your first glance at the Apple TV! As you can see Apple includes nice pull tabs to help remove everything from the retail box. 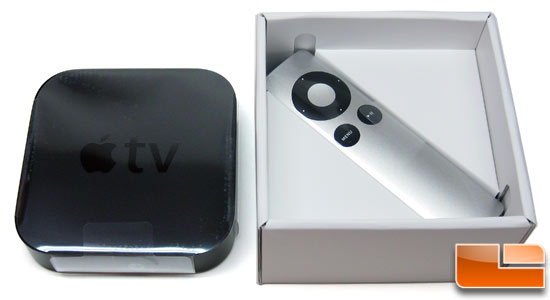 Once you remove the Apple TV from the box you’ll find the super slim all aluminum Apple TV remote. You don’t have to use this remote though as you can control the Apple TV using your
iPhone or iPod touch by downloading the Remote app free from the App
Store. Eventually we might not need basic remotes for most devices as
smartphones appear to be replacing them in this decade. 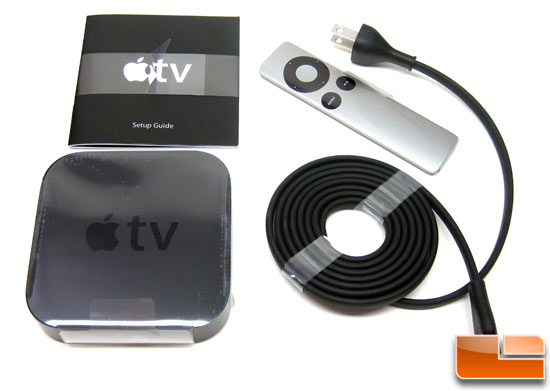 Here you can see all the contents that come bundled with the Apple TV! Besides the player and the remove you also get the setup guide and the power cable. 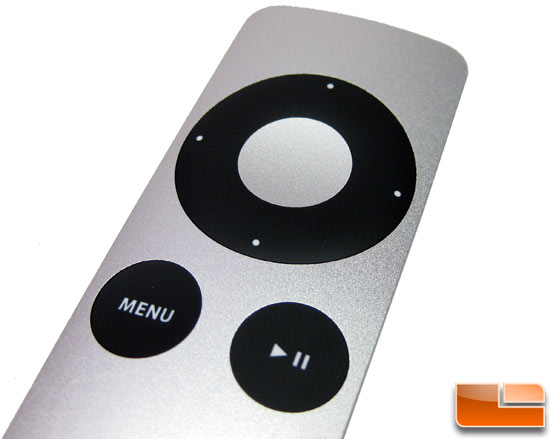 The Apple TV remote is very basic as you can see from the image above. 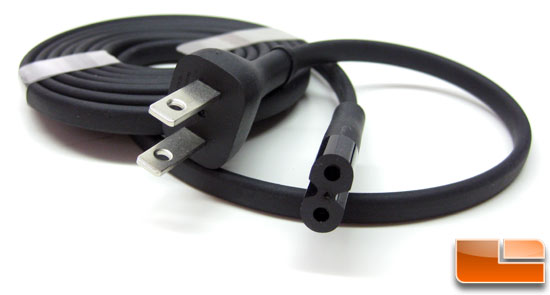 Taking a closer look at the power cable we noticed two things: the first being the fact that there is no power brick converting the AC power to DC and that the player uses just a two prong cable. This means the Apple TV has the power supply built-inside the player. That is very impressive when you think about how small the device is. The Apple TV uses the Apple A4 processor with 256MB of RAM, which is the same as the Apple iPad and the 4th generation iPod Touch. We’ve heard that the Apple TV consumes just 6 Watts of power during use and if that is true this could be the most energy efficient media player on the market today. 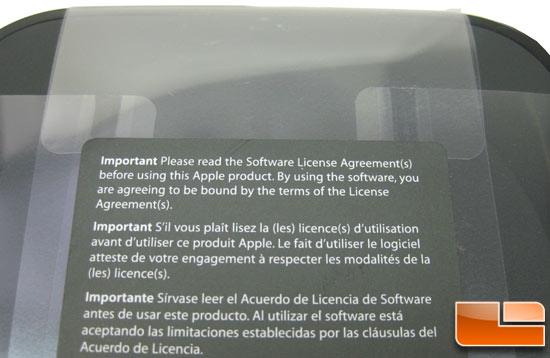 You always have to have a Software License Agreement sticker some place and Apple stuck it on the plastic that you need to remove in order to use the player. 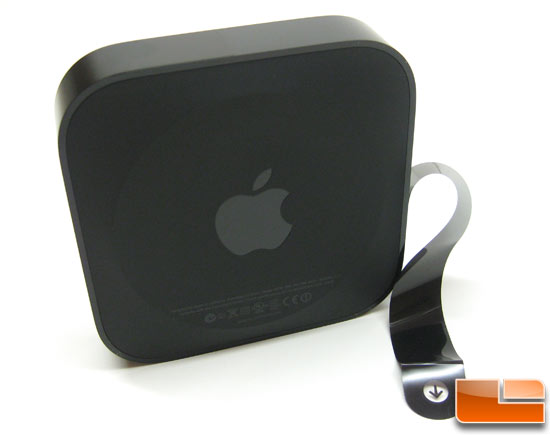 For some reason Apple wrapped a piece of tape around the entire player that covered up all of the ports, so you need to remove that tape before you use it for the very first time. 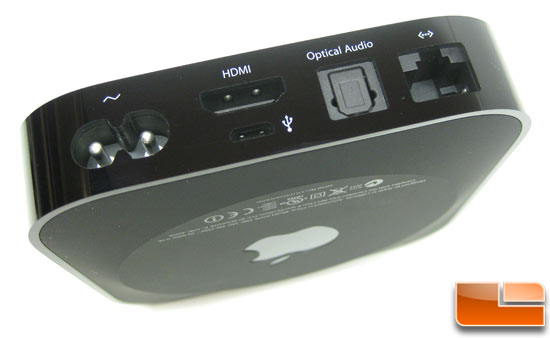 Once the tape has been removed you can finally see the five connectors that we talked about on the device earlier. Once again they are the power, HDMI, mini-USB (diagnostics only), optical audio and ethernet ports. Let’s take a look at the Apple TV powered up and see what it can do!