In recent months, a touch controller company called Synaptics has been making some buzz in the tech industry. Synaptics is claiming that their new ForcePad is the most significant development in touch technology since the company invented the first TouchPad in 1995. A claim like this would normally grab our attention, but with Windows 8 focusing on touch interfaces this statement was worth looking into. Legit Reviews was recently able to sit down with Synaptics and try out some of the new products that they are working on. Synaptics recently announced that they will be releasing three new touch-focused technologies for laptops and other mobile devices: ForcePad, ThinTouch, and ClearPad. Basically, Synaptics will be making the touchpads, keyboards and touch displays that are all driven with one piece of silicon for a user experience unlike anything we have ever had before. These new technologies can be used separately or together and will lead to a new era of human-computer interaction. 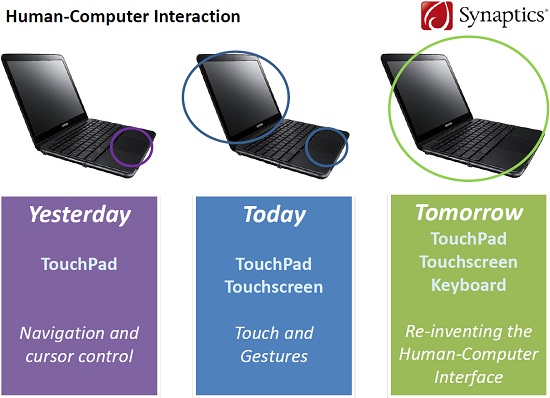 The technology that Synaptics is really focusing on it ForcePad, the breakthrough next-generation TouchPad. As a multi-finger, capacitive TouchPad with variable force detection and a large “modern touch pad” gesture area, ForcePad hopes to redefine the touch interaction experience for notebook and desktop PC users. Forcepad is just part of the puzzle though, as in an ideal system it will be coupled with the ThinTouch keyboard and ClearPad Series 7 display, to deliver the
ultimate touch solution for notebook PC and other mobile device OEM
partners.

Here is a quick video that goes over the Forcepad in more detail and visually shows you how the FircePad adds a third dimension to touch devices. 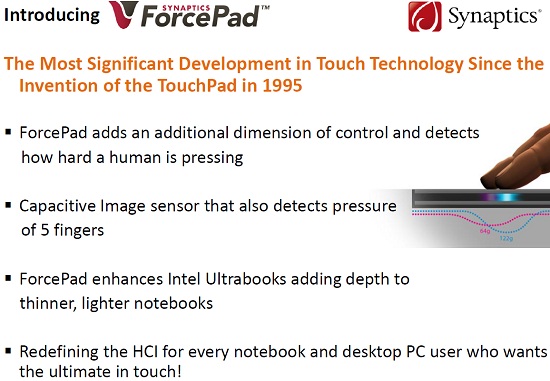 The ForcePad uses pressure tracking instead of traditional mechanical switches, reducing the thickness of the touchpad as a result. The ForcePad can track up to five fingers and can measure up to 1000 grams of pressure per finger. With the 6-bit, 15 gram resolution it means you end up with 64 pressure levels for up to five fingers. This will give software developers an entirely new parameter to develop for, which is exciting. It also should be reliable as there is no mechanical hinge and tactile button switches like current touchpads use. 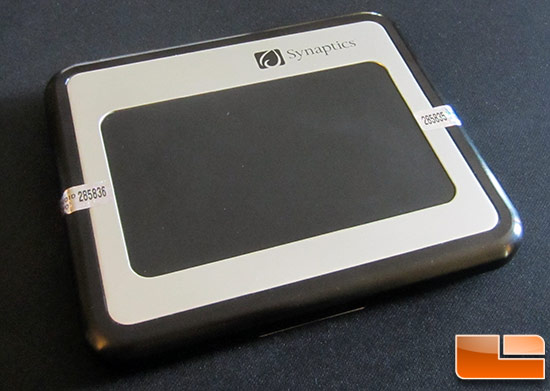 Synaptics has been developing the ForcePad for more than a year now and has sent hundreds of external USB units like the one above to developers so they can begin to use and program for this new design. The ForcePad should work with Windows 8 RTM out of the box, which is a huge plus. 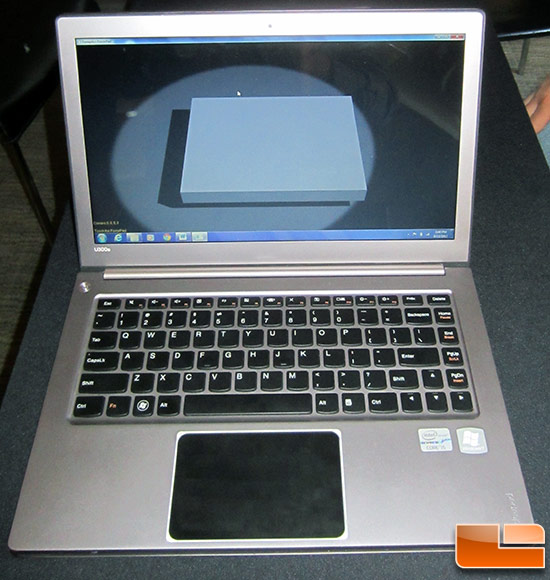 We were also shown working Intel Core i5 laptops with the ForcePad in the chassis and running Windows 8.  We were able to play games and use the new touch interface straight away.  It was a little different not having the tactile fell of the left and right button switches, but it was easy to get used to. 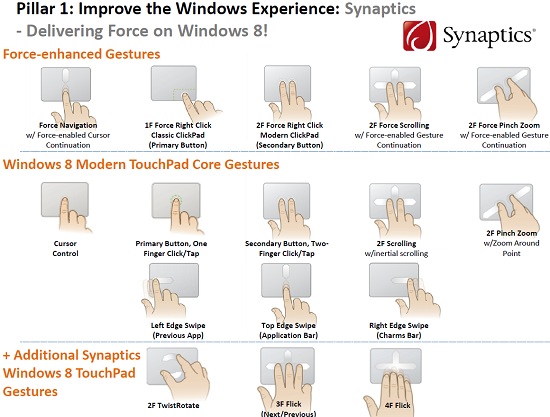 Microsoft Windows 8 will have eight TouchPad gestures available, but there are more available if you use a Synaptics solution.  For example if you use a Synaptics Touchpad you can do two finger TwistRotate, three finger flick and a four finger flick.  If you try out the new ForcePad on Windows 8 you get five more gestures that are only available with the pressure sensors. You can see all the gestures available in the slide above. 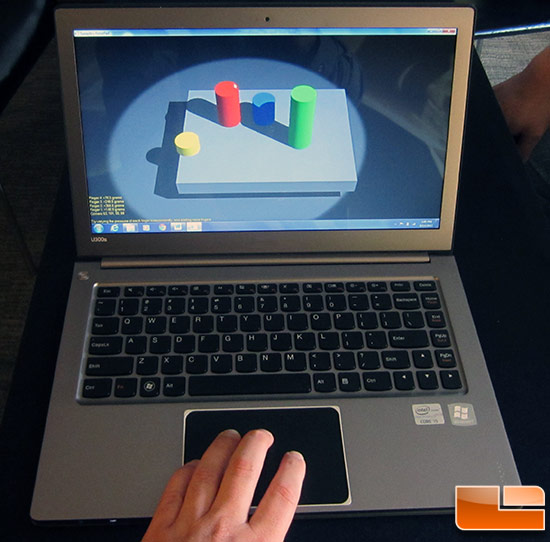 In the picture above you can see how the software can sense how much pressure each finger is applying to the ForcePad. In games you can move or turn directions by just applying more pressure to one side of the pad or another. We tried out the new gestures, some demo applications and a game title during our afternoon with the ForcePad. We found that the ForcePad was fairly simple to use, but there is a learning curve that needed to get over. We’ve used a TouchPad for many years and this is to be expected.  Synaptics informed us that after a few days of constant use that users become fully accustomed to the ForcePad.  They also have a software utility that enables click sounds if you are missing the left and right clicks of years past.

The fun with Synaptics didn’t stop there, as we were then shown ThinTouch and ClearPad.