Anyone that’s spent any time with an Intel Kentsfield processor knows that they run very warm. When it comes to overclocking only the very best air coolers can keep up at even moderate speed increases. Water cooling or something even better at removing heat is required to get big overclocks on this processing powerhouse. Swiftech realized that current waterblocks on the market weren’t as efficient as they could be and decided to remedy that problem by revising one of their most popular blocks giving us the Apogee GT.

The first thing that really hits you is just how small this block is. As an owner of the Swiftech Storm the Apogee GT is downright diminutive in comparison. This is really handy in some cases where you may not have much room so you’ve got much more space to work with the tubing, creating less angles, in turn improving flow. 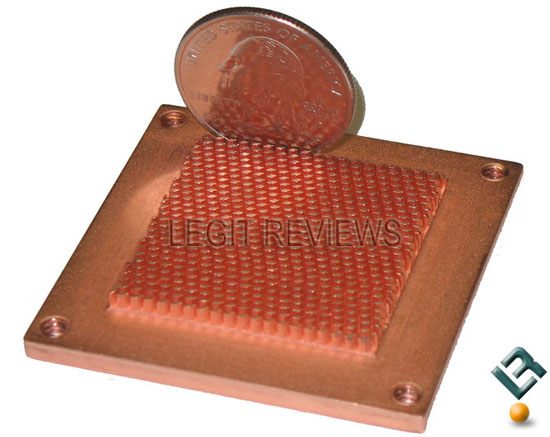 In the picture above you can see that we’ve broken our Apogee GT down to see the CNC machined Diamond Pin Matrix and this is where the GT is set apart from the standard Apogee. They have increased the surface area of the Pin Matrix and also the coolant velocity in order to speed the heat away from the CPU. The copper base plate comes it at 3mm thick which allows it to be “tweaked” a bit to improve performance even further for those feeling adventurous. We will not be exploring this option in our testing as it becomes fairly involved and to get optimal results would require me to lap my $1200 CPU, thus voiding the warranty. The bottom line here is that the Apogee GT’s cooling can be enhanced if you don’t mind things like voided warranties.