USB Flash thumb drives haven’t been around forever, even though it feels like they have been to some. Those of us old enough remember fussing with floppy disks (if you remember using 5.25″ disks you are old), Jazz, and Zip drives see these devices as a godsend. Not only can you carry around enormous amounts of data in an extremely small and (typically) durable package, they are very affordable. Ostensibly, they are simple devices, primarily comprised of a bit of PCB, some NAND flash memory and a controller. They’ve changed little over the years save for increasing dramatically in capacity and bumping up performance when improvements have been rolled out in USB bandwidth. With the advent of USB 3.0, the amount of bandwidth available has grown considerably which has prompted a bit of an architectural change to take full advantage. Super Talent has done just that with their USB 3.0 Express RC8 thumb drive which is essentially an SSD drive in stick form complete with the ever popular SandForce SF-1200 controller and eight channel architecture. Hence the RC8 moniker. We’ve got the 50GB version in our grasp to see what this baby can do.

Armed with the above mentioned hardware and a virtual caching system, the RC8 boasts blistering fast read and write speeds of up to 270MB/s and 220MB/s respectively. Super Talent offers up capacities of 25GB, 50GB and 100GB versions. A quick video below does a nice job of introducing the drives to get things started before we dive in.

Below are the part numbers and best online pricing we could find at the time of writing.

On the front, the Super Talent brand and model name (capacity not listed) are stenciled on the aluminum body of the drive. The rear is devoid of writing. Each end, including the cap, is molded translucent blue plastic which actually run through the center of the drive and thus able to allow light to pass completely though. The back end offer a loop for attaching a lanyard although one is not included. This also acts as a holder to snap the cap on when in use except in the case where a lanyard is being used as it would interfere with the fit.

The drive is not exactly small at just under 3.75″ or for those more fond of the metric system, 92.7mm. It’s also nearly and inch in thickness (25mm). It doesn’t have much heft to it at 0.8oz (22g) and actually feels fairly svelte in your hand. With the exterior of most thumb drives being a rubber compound these days, it feels a little more elegant and perhaps more worthy of the price tag.

The business end of the drive has the typical blue connector which most users are familiar with as representing the USB 3.0 interface. 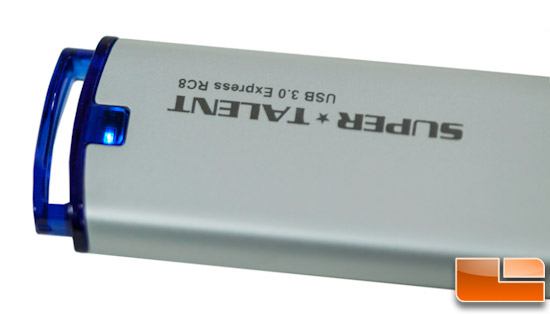 When in use, the LED at the tail of the drive illuminates to show activity which is always helpful to make sure you aren’t yanking it out at an inopportune time.

A look inside shows two MLC NAND flash chips on one side.

The other side has two more with the SF-1200 controller right next door. The SandForce controller, besides the obvious chores, also takes care of wear-leveling duties, idle garbage collection, real-time compression and encryption tasks. it should be very familiar stuff for those keeping up with SSDs.