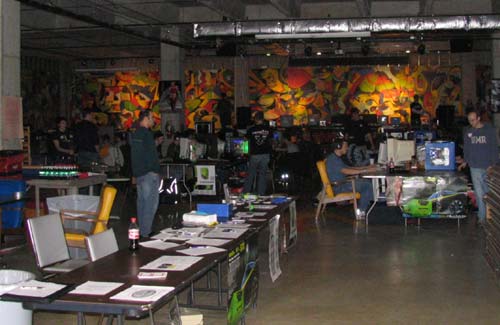 Near large cities throughout the year, there are numerous LANs on the weekends. Today Legit Reviews took some time off on a Saturday afternoon and went out to support one of St. Louis’ local LANs. This 72-person LAN was put on by the folks at WarFactory. These smaller LANs are great for taking some time off from the normal work week and having the chance to get your FRAG-on!

This time around, WarFactory’s LAN had a $20 per person entry fee. The winners walked away with double their money and second place got a free LAN. They played tournaments of UT2004 3v3 TDM and Counter-Strike 1.6 5v5. The winners can be found on WarFactory’s main page. I must say this was a very relaxing and enjoyable event! $20 for a great time and getting to meet other local gamers is priceless!

This nice “bunker-style” concrete room was the perfect setting for some major gaming action! As I mentioned, 74 systems running and fragging is a beautiful thing! There were some pretty slick looking cases on those tables. One that comes to mind was an amature custom rig with a Mario Bros. theme. Among others, there were Unreal themes, cold-cathod lit systems, and one water-cooled system (pictured below).

The gamers above are enjoying round 2 of the UT2004 Tournament in which they will soon take second place! Notice the Alienware laptop on the end!

The crew at WarFactory were able to get prize donations from quite a few well-known copanies in the industry. These sponsors included NVIDIA, ATI, BAWLS, Velocity Micro, Monarch Computers, and Alienware! With the turnout at this LAN, I suspect WarFactory will be able to keep these sponsors and get new ones!

We of course brought our LR LAN Rig to show off while we were there. We enjoyed talking to the gamers as they came by our setup and answered any questions they had about our rig. This time around, our rig featured the ABIT Fatal1ty AA8XE, Intel Pentium 4 3.46Ghz ES w/ 1066Mhz FSB, 1Gb Corsair XMS PC2-5400 Pro, 160Gb Maxtor 7200rpm HDD, NVIDIA 6800GT, 520W OCZ PSU w/ adjustable Volt rails, and a Thermaltake Xray (beverage holder and cigarette lighter) all encased in our Beantech Igloo 8 Aluminum Case.

The other pic above was something we noticed as we were on our way out the door. We saw a group of gamers outside the event in one of the vacant computer labs in the building which the event was being held. We walked up to them to find out what they were up to because they honestly looked suspicious. Low and behold, they were actually being pretty smart! (Just kidding!) They were trying to solve one of the biggest problems with this LAN party. This would be the infamous STEAM software! You see, for typical smaller-sized LANs, there is no internet connection; everyone is just on one, big, private network. Well, about 10-15% of the people there just happend to be at the stage where STEAM requires an internet connection to “re-validate” your account. So the result being a bunch of guys who could not play CS 1.6 for the tournament! These fellas are just stealing the building’s internet connection to get STEAM to re-validate, so they can bring their rig back to the event and play CS 1.6. WHAT A PAIN!! (Take note VALVE!)

The staff of WarFactory (pictured above) was nice enough to let us talk a lot with them on how things were running and issues they were having. Of those issues, a big one was the STEAM updating issue we just talked about. They did have any power consumption problems, but there were a couple of power-strips that “popped” while we were there. Here was what Dave Derington had to say about the event after it was all said and done.

“In general, this event went fairly well.  The snow reduced our headcount, but we still pulled in 72 people for the event (53 of whom had paid in advance, which is a new record for us).  We had some technical difficulties that delayed the CS Tournament, which was a disappointment to me, but in general people seemed to be happy and had enjoyed themselves.  Because of the low turnout, we gave all 1st place winners $40, and 2nd place winners $20, for a grand total of $500 cash handed back to attendees.”

So it seems like overall, Dave thought the event went quite well, also. Now we will delve into the world of statistics and show the results of the survey we conducted while talking with the gamers!