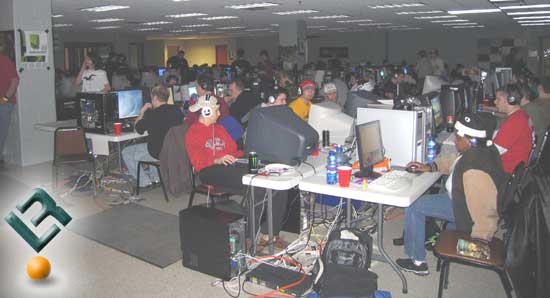 Over 112 gamers filed into the old West County Tech building last Saturday, January 14th, for Laclede’s LAN’s ninth event.  In stark contrast to the day before, the weather was clear, crisp, and perfect for hauling PC equipment in from cars.  Most people would be anything but alert at 9 AM on a Saturday morning, but the atmosphere was more charged than normal as this was the first LL event to offer hundreds of dollars in cash prizes.  The sponsor crew had been hard at work for weeks, and it showed not only on the tourney prize list but also on the heavy-laden prize table.  Spread out on the prize table like a tech-head’s Christmas morning was gear from sponsors such as Ranken Technical College, Nerds On Site, Alienware, BAWLS, Crucial Technology, GearGrip, nVidia, CompUSA, Thermaltake, and VISA. 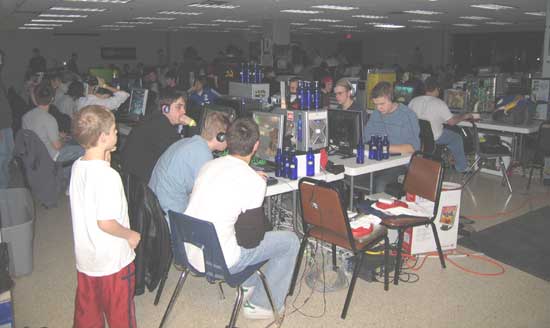 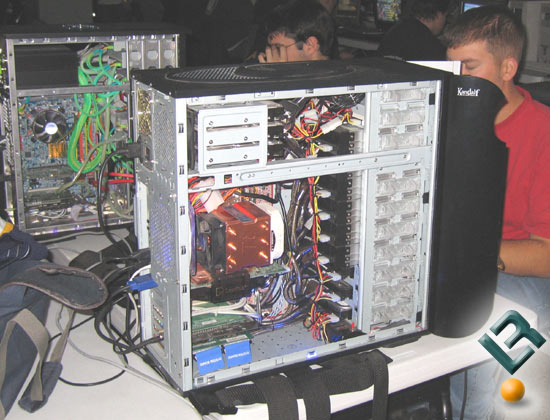 The rest of the day was charged with excitement about the four upcoming tournaments: Counter Strike 1.6 and Quake 4, and Battlefield 2 and Counter Strike: Source all-day tournies.  The tournaments were long — in the case of BF2 and CS:S, the tournament never really stopped.  And the competition was stiff, with teams like Team Retry, Team Famous, and the Gummi Bears all out for blood.  But eventually the winners emerged… Team Retry brought home $85 dollars per team member for their mastery of Counter-Strike 1.6.  ERMAC’s first place finish in the Quake 4 tourney netted him $300.  GobLox came out on top after a full day of Battlefield 2 for $20 and some gear from the prize table, and kwick took the gold (and his own money and gear) for his all-day CS:S skills.