SSD Pricing Headed To All Time Low – Time to Buy?

PC enthusiasts have been been in love with the amazing performance SSDs bring to the table for over a decade, but mainstream users are just getting a taste of them. 2019 looks like it is going to be a great year to buy a new SSD as pricing has been dropping at an unbelievable rate. According to the latest Quarter on Quarter (QoQ) figures from TrendForce the average contract price for SATA SSDs has fallen by up to 26%, and PCIe SSDs have dropped by up to 37%. 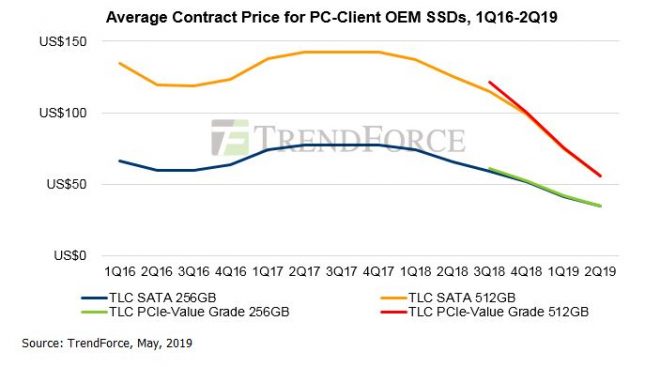 After analyzing the data TrendForce believes that average contract prices for 512GB and 1TB SSDs have a chance to drop under $0.10 per GB by the end of this year, which is an all-time low. This means that we’ll see more OEM systems coming standard with an SSD!

“The reasons for the continuous price fall in 2Q include: weakened stocking momentum due to the cautious stance of PC, smartphones and servers/datacenters OEMs towards end market sales and high inventory levels, leading to an overly oversupplied NAND flash market; price wars by leading SSD suppliers who are keen to get their 64/72-layer stocks off their hands; and the price comparison effect as a result of Intel 3D QLC SSDs.” wrote TrendForce

Let’s hope this forecast is accurate and come true as that will be great for all PC users! The trade dispute between the US and China may actually raise retail SSD prices though as it doesn’t appear this report took into consideration the higher tariff that went into effect today. It might be a good time to buy an SSD if the trade battle continues as retail prices have not gone up yet.