SpaceX Gets The All Clear For Crew-3 Launch

NASA and SpaceX are set to launch the Crew-3 mission to the ISS on November 10. However, the mission was delayed multiple times due to weather and health issues with one of the astronauts. There had also been concerns focusing on the parachute used by the spacecraft.

NASA officials gave a briefing yesterday stating they were moving ahead with the launch of the Crew Dragon spacecraft on the 10th at 9:03 PM Eastern. Assuming the mission launches on time, the capsule will dock the ISS at 7:10 PM Eastern on November 11. 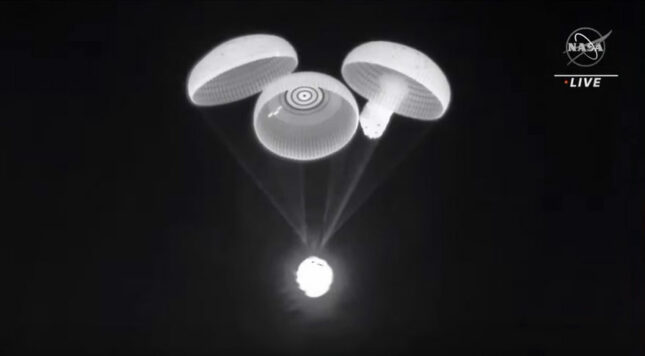 Past delays for the launch focused on the weather at the launch site and abort locations in the Atlantic Ocean. The minor medical issue with one of the four astronauts was never elaborated on. No details on what the problem was or which of the crew members it affected were ever offered.

NASA did say the medical issue was resolved, and all the astronauts were ready for flight. NASA returned the astronauts on the Crew-2 mission on November 8. There was a concern because one of the four parachutes was slow to inflate (seen in the image above). SpaceX said that wasn’t an issue and was something seen in past testing.