A new report has surfaced from Japan that highlights the PlayStation making prowess of Sony’s nearly completely automated PlayStation factory. The factory sits across the bay from Tokyo and is capable of producing a PlayStation 4 at a rate of one every 30 seconds.

Few humans are needed in the entire factory, and those who do work there deal with a small number of tasks. Two of the humans in the factory feed bare motherboards into the line, and two of them package finished consoles. The 31.4-meter long line was completed in 2018 using articulated robots supplied by Mitsubishi Electric. 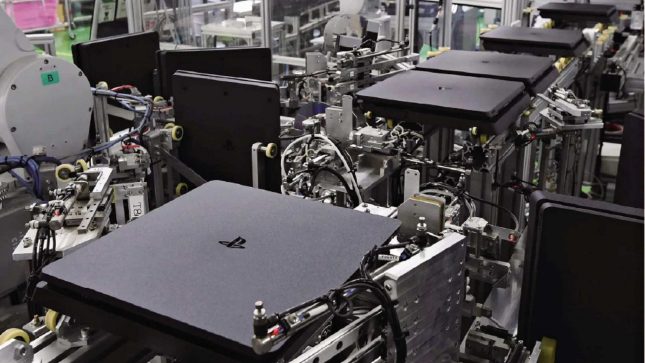 Being able to produce a finished PlayStation 4 console every 30 seconds is very impressive. The factory uses the robots to attach wires, tape, and other flexible parts to the consoles. There are 32 total robots in the plant, and 26 of them are dedicated to connecting flexible components. The robots can handle those flexible materials, which is something many robots have a hard time doing reports Nikkei.

The attachment of a flexible flat cable requires one robot arm to hold up the cable and another arm to twist it and connect the cable. Those are tasks easy for humans to do but prove a significant challenge for robots. “There’s probably no other site that can manipulate robots in this manner,” said an engineer.