Sony has announced four new colors for the PS4 DualShock 4 wireless controllers that will launch this fall. The quartet of new colors will slot into the line up that has seen 25 different colors since the PS4 launched. The new colors include electric purple, rose gold, red camo, and electric blue.

The electric purple controller has a two-tone purple design with white PlayStation shapes for more contrast. The Red Camouflage is mostly red with black, red, and brown camo with silver detailing. 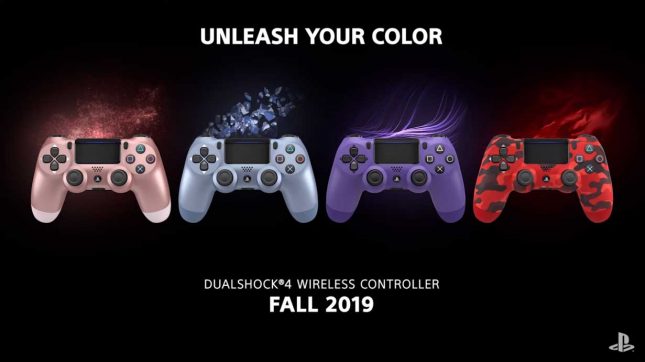 The Titanium Blue PS4 controller has a light blue metallic cover with a matte blue back. The last of the new colors is rose gold offering a metallic gold finish and what appears to be a pink-tone back.

For those who like the rose gold controller, Sony will also be launching a Rose Gold Edition Headset to match it. Each of the controllers will launch in September for $64.99 with the headset launch later this fall for $99.99.