The tweet posted by the official PlayStation account reads, “We have decided to postpone the PlayStation 5 event scheduled for June 4. While we understand gamers worldwide are excited to see PS5 games, we do not feel that right now is a time for celebration, and for now, we want to stand back and allow more important voices to be heard.” 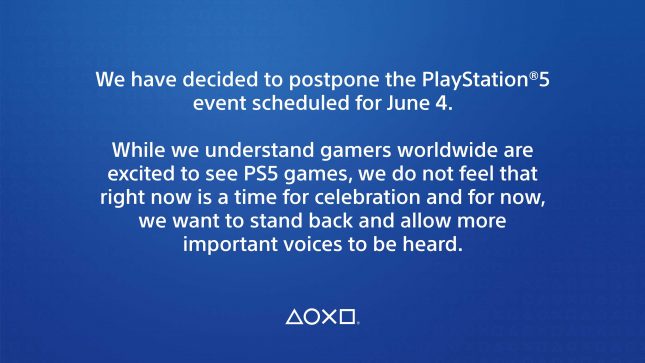 The event was intended to debut games that would play on the next-generation console. The “more important” voices that Sony is talking about are presumably the voices of the protesters around the United States amid the unrest going on right now around the country. At this time, Sony has not announced when the event might be rescheduled.

Sony insists that the PlayStation 5 is on schedule to launch this holiday season. Sony CEO Jim Ryan has announced that pricing plans for the console haven’t changed during the COVID-19 pandemic. There has been no indication so far what the console might sell for, but a rumor has suggested could be as much as $100 more than the Xbox Series X.