Skywatchers Can Checkout The Moon And Venus In Proximity

This weekend NASA is telling skywatchers to go outside and check out something beautiful in the night sky. The agency says that if you look at the sky on November 7, you will be able to see the crescent moon and Venus nearby.

NASA says the spectacle should be “really pretty.” The moon and Venus will be at their closest position in the night sky in a while. “From Nov. 6th through the 11th, watch the moon glide past Venus, Saturn, and Jupiter after sunset in the south/southwest,” wrote NASA. 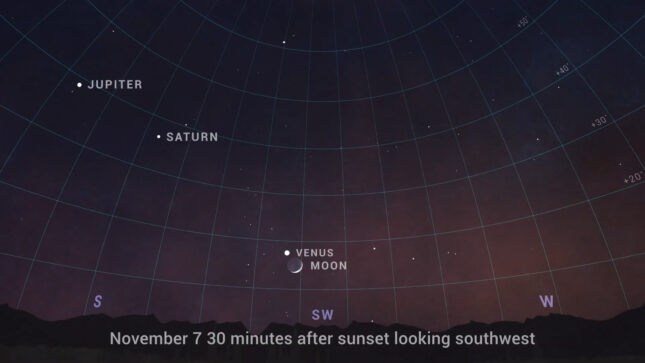 Later in the month, NASA says that Jupiter and Saturn will slowly move closer to Venus until early December. Venus is a target for future space missions being carried out by NASA and the ESA.

The goal of those missions is to learn more about Venus. Another interesting spectacle to watch in the sky will happen on November 18 and 19, with a lunar eclipse taking palace. It will be visible from any location where the moon is above the horizon.