Taking a look inside

Once the cover was removed from our Skyhawk modular power supply we quickly found the 12V power wires (the yellow ones).  There were nine 12V cables found coming out of the baseboard. Three of which went to the daughter card for the modular connectors and the other six went to the 24 pin connector.

Flipping the board’s baseboard over, we get a better picture of how everything is connected.

As seen above, all of the power supply rails are connected to a single location, and since we know that the top of the PCB has the 12V rails going straight to the daughter board for the modular connectors and then down to the 24 pin ATX connector, there is no possible ways the rails can be split like the box and marketing materials claim.   Remember that the EPS guidelines stated that the 12V rails should not be connected together on the baseboard to ensure that 240VA protection circuits in the power supply operate properly. I guess this, along with the ATX12V version 2.01 standards, were just not of concern to the people who laid out the PCB trace routes.

Having been made aware of this issue, the staff of Legit Reviews voided some more warranties and disassembled some of the more popular power supplies in the enthusiast community.

One popular choice is the OCZ PowerStream series. We took apart their top end 600W PSU (Model # OCZ-600ADJ) which OCZ claims to be ATX12V Version 2.01 and EPS12V ready. Here is what we found with the cover removed. 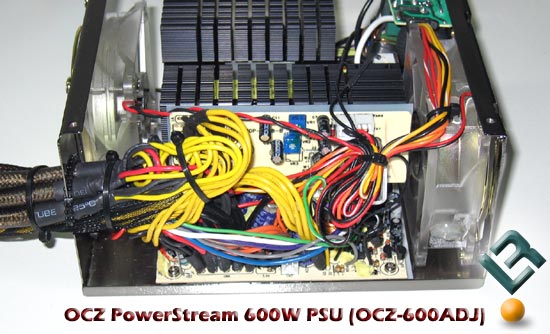 All of the 12V power cables come out of the baseboard and right into a daughter card which separates the 12V lines into two rails; 12V1 and 12V2. The OCZ PowerStream also has adjustable potentiometers (pots) for both of the regulated voltage rails. We cut some cable ties and removed this daughter card to take a closer look at the back just as we did with the baseboard on SkyHawk power supply unit. 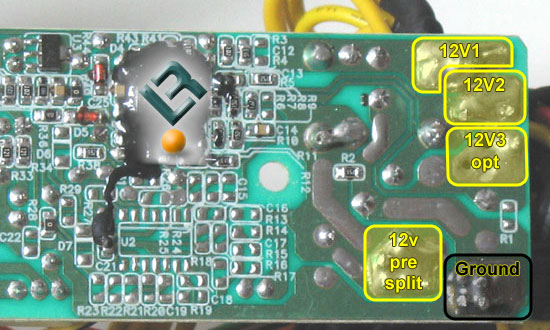 All six 12V wires come onto the board and are then split into separate rails that are regulated.  This specific card has an optional 12v3 rail.  The OCZ Power Stream 600W power supply is clearly ATX and EPS qualified, and meets all the requirements found on the market today.

We also looked at several models from Antec, another brand popular among enthusiasts. We found that the Antec 2.0 models also have “true” split rails and meet the guidelines we have mentioned earlier. Now that we know the SkyHawk Power Supply doesn’t live up to the specifications on its box and on retailers websites (such as Newegg), we need to round up our thoughts on the whole situation before we pass judgment.