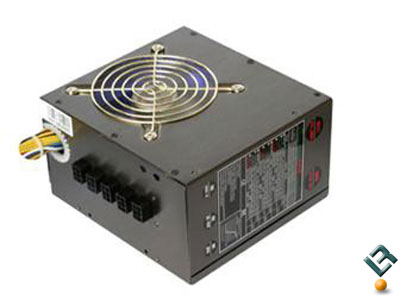 **UPDATE**
After reading this review and receiving some feedback from people interested in the PowerONE, SkyHawk has responded. I received a few emails from their rep that addresses some of the short comings that I had pointed out.

This is from the Beverly’s email, slightly modified for readability only.
1. The Warranty is 3 years. (originally i was told by them 1 year)
2. Cable length, I already spoken to our factory to enlarge the cable length.
3. Longevity of electrical components. Because we have higher heat resistance components, so you don?t have to worry that it will damage the cable around it. Our heat resistance components can hold up to 40 degree, then the Fan will spin.
4. The MTBF can reach to 100000HOURS.
5. Because this is a test sample, the factory forgot to glue the SLIICA_GET. But I already told them to be careful on this.
Thanks,
Beverly

I love the fact that she took the time to make sure that the silica gel packages get into the retail boxes. Let this be a lesson, manufactures do listen to the needs and wants of their buyers. Based on the revised warranty and MTFB, and the response to my suggestions I am upgrading my recommendation to a strong buy.
**/UPDATE**

If you know Skyhawk then chances are you know of them as a computer case manufacture. What you may not know is that they actually produce a whole line of computer related items, from rack mount cases, pc cases, power supplies, and even networking gear. Today we have the Skyhawk PowerONE 620w modular power supply in our socket A testbed. I first found Skyhawk a few years ago when I was looking for an aluminum pc case. What attracted me to their products was the value offered. Manufactures like Lian Li make great pc cases; however the cost was somewhat prohibitive at the time, which is where Skyhawk came in. They offered a case with similar styling and size to the Lian Li PC-60. The best part was if you looked you could get it for under $50. At the time that was nothing short of amazing, while it did have some limitations due to cost cutting, I am to this day using the case and I still find it an excellent case to work in. So can Skyhawk offer the same value and maintain their quality when it comes to power supplies? I hope to find out during the course of this review. 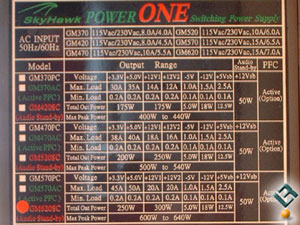 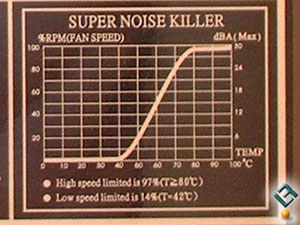 SkyHawk seems to have done a decent job putting together a solid package. The burning question is how the PowerONE stacks up against the dominant players when it comes to price, features and most importantly power. To get a good idea I will be testing it agains the OCZ PowerStream reviewed previously, and I will be comparing its features and price to the Fortron Blue Storm and Antec NeoPower.

So let?s talk about power. A quick test of a power supplies quality is its combined 3.3v and 5v wattage. The PowerONE has a combined 3.3v and 5v of 250w according to the sticker and documentation. This is lower than the OCZ but not in a detrimental way. When you add in the three remaining advertised 12v rails you end up with lots of power, especially for newer processors like the Prescott and Winchester which can tax even the strongest 12v rail. There are two areas where the PowerONE seems to really take a cost cutting hit and that is in the warranty and in the mean time between failures. What is Mean Time Between Failure, according to Wikipedia, “in engineering and telecommunication, the mean time between failures (MTBF) is the average time a system will operate without a failure. The MTBF is a commonly-quoted reliability statistic, and is usually expressed in hours (even intervals on the order of years are instead typically expressed in terms of thousands of hours).” (Wikipedia) Comparing against the OCZ the SkyHawk PowerONE comes with a meager 1 year warranty to OCZ 5 year, and an 80,000 MTBF raiting to OCZ 140,000 hours. Even the more moderately priced Fortron Blue Storm has an industry standard MTBF of 100,000 hours. If SkyHawk really wants the PowerONE to fly off the shelves they might want to look at improving the number of hours to failure and give at least a three year warranty as both are a testament to the quality of the product. To put the 80,000 hour rating in perspective it suggests that the mean time to failure is around 9 years. I think its safe to say that you will likely need to upgrade well before this power supply gives out.