Seagate has announced their latest wireless storage device, the Seagate Wireless Plus. Wireless Plus mobile device storage is made to wirelessly stream multimedia content to your smartphone or tablet. Seagate has built in enough space for 500 high-definition movies and up to 10-hour of play time in the battery. You should have more than enough space for your favorite movie or television series with the built in 1TB hard drive. Seagate isn’t waiting on the doors to officially open at CES either – you can pick up the Seagate Wireless Plus right now from your favorite retailer. At an MSRP of $199, this might be the perfect solution to those on-the-go people who can’t live with cumbersome wires or traveling without their favorite media. 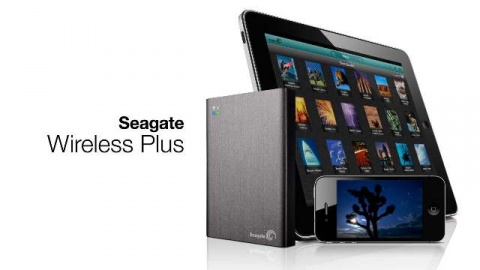 The new 1TB wireless drive comes with a removable SuperSpeed USB3.0 adapter for quick loading of photos, video, music and even documents. Fill it up and go, for true anywhere access of all your favorite entertainment or much needed work-related files anywhere. Because the Wireless Plus creates its own Wi-Fi network, there is no need to stream or download your content from the Internet or to spend money on a data plan. Everything is with you, where you want it, when you need it with a secure and wireless connection.