One of our readers asked us to look at the Seagate Barracuda ST5000DM000 5TB 3.5-inch internal desktop hard drive as he bought one off of Amazon and was having some performance issues with the drive. We looked into it and discovered that Seagate does not sell an internal 3.5-inch desktop drive on the market. That is strange as we went over to Amazon and found half a dozen retailers selling this particular drive under the title of ‘Seagate Barracuda ST5000DM000 5TB 3.5-Inch Internal Hard Drive, SATA, 5900 Rpm, 128 Mb Buffer’. The companies that have sold this drive include known online retailers like Mwave and Rakuten, so these Seagate 5TB drives aren’t being sold by little unknown sellers. 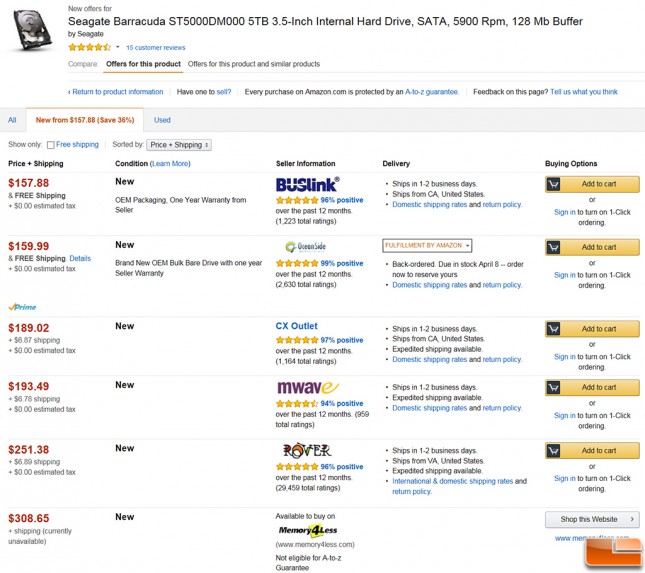 When we looked closer at the listing we quickly discovered that the detailed description for the Seagate Barracuda ST5000DM000 5TB drive shows that it is an OEM bulk drive or that it is in OEM packaging. From what we gather is that someone along the supply chain is pulling these Seagate 5TB drives are pulling these drives . Zero warranty from Seagate, only from the seller. The description states OEM but they look as if they took them out of some other device like an external USB backup enclosure that actually sells for less than the bare drive. 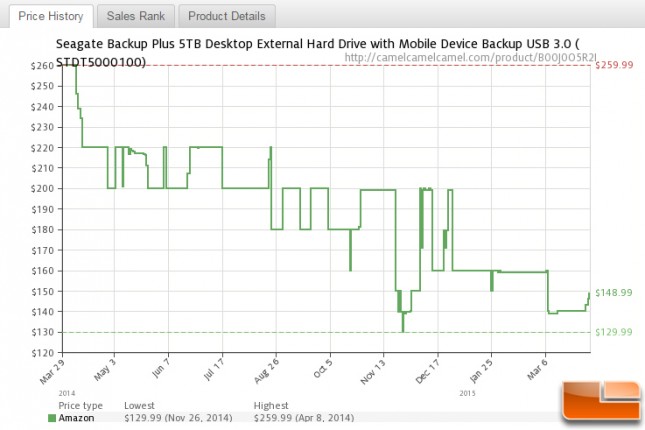 For example the Seagate Backup Plus 5TB Desktop External Hard Drive Enclosure has been priced at $129.99 at times and what some people are doing is taking that drive out of of the enclosure and reselling it for a profit as they are getting around $159 on sites like Amazon and eBay! This practice has been going on for a number of years with every brand storage drive out there and while most enthusiasts know about the practice it is relatively unknown to first time DIY consumers. 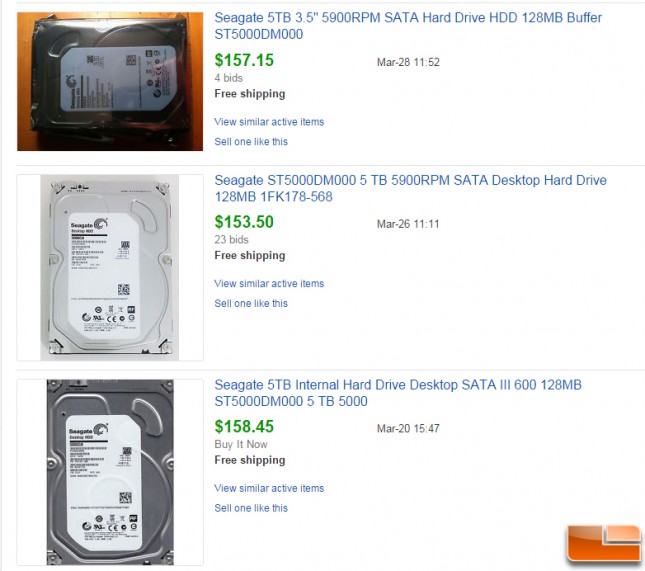 Why is this causing an issue for some consumers that unknowingly buy one of these drives? The two big issues is that the firmware of the drives is often designed and optimized for NAS or backup drive use and the drives do not carry a standard warranty on them.

We headed over to eBay and grabbed some of the serial numbers off the Seagate ST5000DM000 5TB drives being sold and found that the warranty status was unknown on every single one of the eight drives that clearly had the serial number visible in images on the listings. We contacted Seagate and was told that drives being sold like this are covered under the warranty of the product that they were originally sold in and not as an individual drive. Basically, that can be translated into the seller of these OEM drives is the one that has to warranty them should anything go wrong with the drive as Seagate has nothing to do when drives are being parted out from enclosures and being sold onto the market. If you are buying a ‘new’ OEM hard drive off of eBay and the listing has the serial number of the drive shown we highly suggest checking it online to check the warranty status of that particular drive before purchasing it. 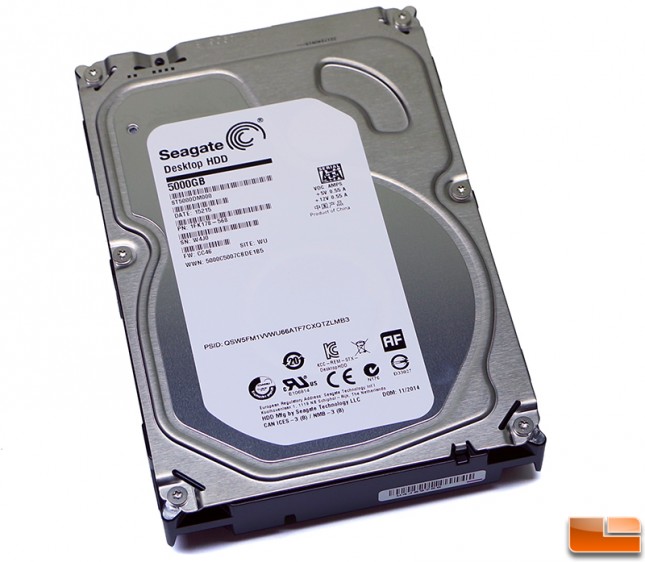 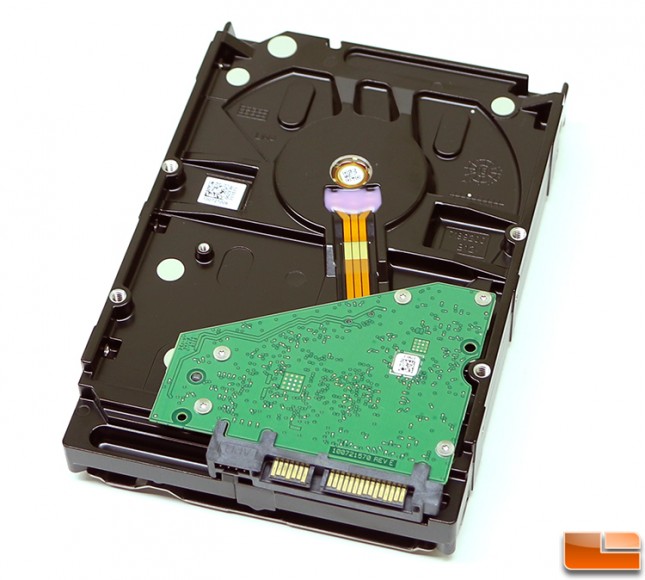 This public service announcement by Legit Reviews could be over right now, but we went a step further and got our hands on a Seagate ST5000DM000 5TB drive and took a look at the performance of it. The Seagate SR5000DM000 features Seagate Shingled Magnetic Recording, or SMR, to maximize the number of tracks per inch on a single disk. This particular model has four platters (disks) and eight heads. Each platter is able to hold 1.25TB of data.

We took off the PCB and on the other side found an LSI controller, SMOOTH DILLON spindle motor controller, Winbond DDR3 memory chip and the the other various components needed for the Seagate 5TB drive to work. Seagate went with a Winbond W631GG6KB-15 DDR3 SDRAM that was found to be 1Gb part that operated at 1333MHz with 9-9-9 trimmings. 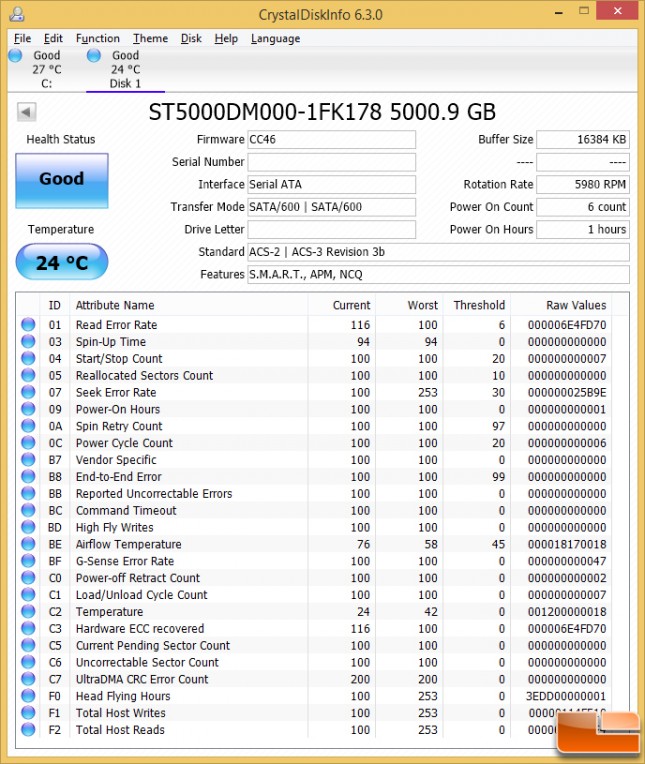 Both CrystalDiskInfo and HD Tune Pro show that this 5TB drive uses the Serial ATA (SATA) interface with a 5900 RPM spindle speed with a 16MB buffer. The Amazon listing shows this drive as having a 128MB buffer, so it looks like the listing is wrong. The ST5000DM000 drive that we are looking at today uses firmware version CC46 and features S.M.A.R.T, APM and NCQ technologies. The drive was brand new when we got it and we performed a full format back to the original settings to ensure a true ‘Fresh Out of The Box’ drive state.

We started out benchmarking the drive on the ASUS Z97-A motherboard with an Intel Core i7-4790K processor, but we were getting some very strange benchmark results in popular storage drive benchmarks like ATTO. 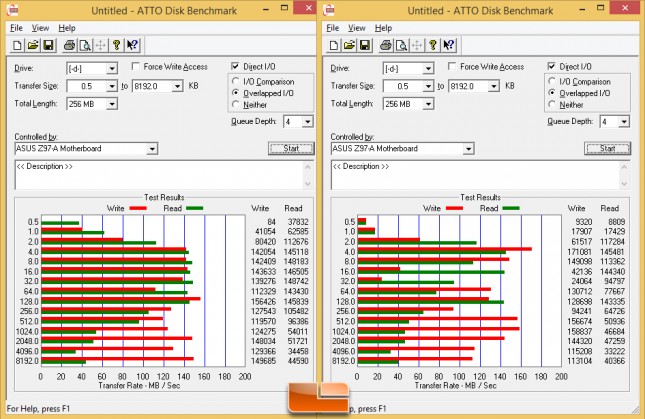 The standard CrystalDiskMark benchmark shows sequential read/write speeds of 172MB/s and 166MB/s, but when we tested with the highly compressible 0x00 (0 Fill) data test we found the sequential read performance topped out at just 27MB/s. We formatted the drive several times and had no luck in getting consistent performance. We switched over to our Intel X99 test platform that is comprised of the ASUS X99 Deluxe Motherboard with an Intel Core i7-5960X Processor running Windows 8.1 64-bit and again found inconsistent and just flat out strange performance numbers.

The same drive after a a format was very to have very different sequential read/write performance numbers as the best we could do was only 41MB/s read and 134MB/s write on the standard test. 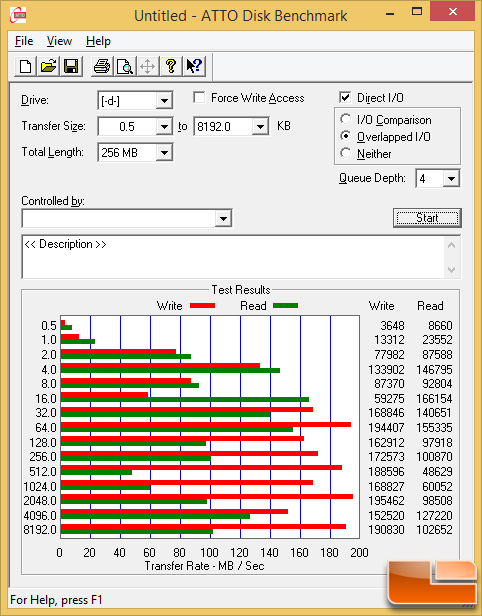 Our ATTO result was no better with sporadic performance. We topped out at 155MB/s read and 195MB/s write on the X99 system with all the latest drivers from Microsoft and Intel. 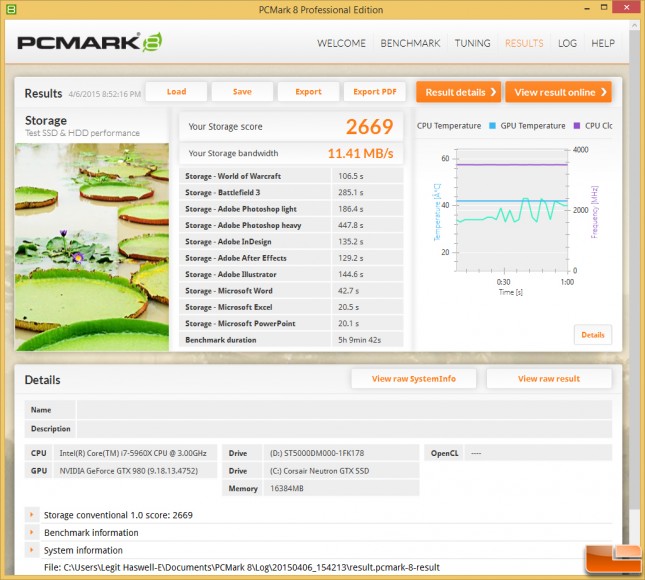 The PCMark 8 storage benchmark showed the Seagate ST5000DM000 5TB hard drive as having an overall score of 2669 and it took just over 5 hours to complete this test that often takes less than 50 minutes on a Solid-State Drive. The overall storage bandwidth score in PCMark 8 was found to be just 11.41MB/s. That is the lowest score that we have ever seen in PCMark 8.

Next up we used HD Tune Pro 5.50 to look at read and write performance of the drive. This benchmark seemed to give us the results that we were looking for and the read performance went from 188.3 MB/s to 83.8 MB/s as the test was performed across the faster outer areas of the platters to the inside. The write test ranged from 186.0 MB/s to 79.5 MB/s, so both read and write performance across the drives platter was pretty close. Both read and write benchmarks had the burst rate at around 331 MB/s. The Random Access Read performance topped out at 62 IOPS no matter the transfer size, which is certainly no where near what you see with an SSD. The block size measurement test showed that the read performance never got over 50MB/s on any of the block sizes, which is very unusual and the write speeds only barely topped 100MB/s in three of the tests. Sequential read/write speeds were found to be 66 MB/s read and 98MB/s write according to HD Tune Pro. Not the fastest hard disk drive out there and it would be our guess that the firmware on this drive is not optimized for normal desktop use as it is usually used in an enclosure through the USB 3.0 interface. 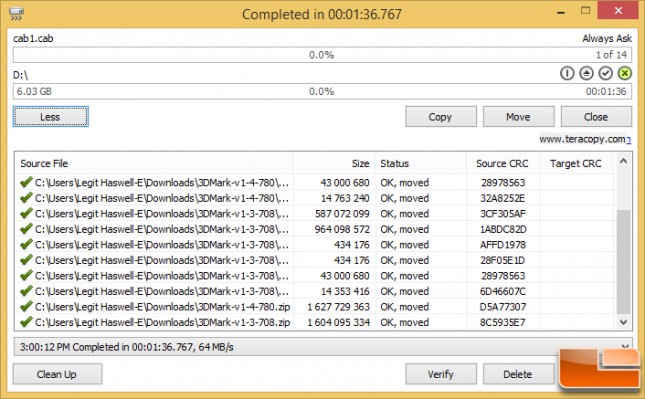 If you come across a Seagate ST5000DM000 5TB hard drive for sale you should understand that it was pulled from a backup enclosure or NAS and is being resold as an OEM drive. This means that you have no warranty direct from Seagate and that any warranty on the drive will be coming from the seller that you purchased it from. The performance on the drive was found to be pretty erratic, so we wouldn’t advise buying one of these hard drives and using it in a desktop PC due to the warranty issue and the overall performance numbers that we discovered from this drive. This drive is best left to enclosures where it was designed to be used in the first place. Seagate makes a 6TB Desktop Hard Drive for consumers under part number STBD6000100 for $259.99 shipped and a 4TB Desktop hard Drive under part number STBD4000400 for $152.00 shipped. The Seagate ST5000DM000 5TB hard drive might seem like a steal for $157.88 shipped, but once you look a little closer it might not be!

Seagate has yet to respond about our odd performance numbers on this drive, but if they decide they’d like to respond we’ll happily add an update to the article below with their statement.