AMD hasn’t announced the AMD Radeon R 300 series cards yet, but you can go out and buy one today at your local Best Buy store and a handful of AMD’s board partners have already listed Radeon R9 Fury X, Fury, 390X, R9 390, R9 380, R7 370 and R7 360 cards up on their websites. This means we now have core counts, clock speeds and model numbers for pretty much all the new cards that AMD has been working on. 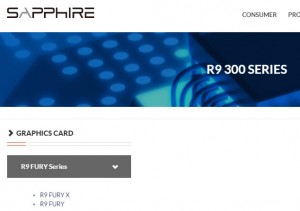 Sapphire has all the above mentioned cards listed up on their site right now, but unfortunately the Radeon R9 Fury X and R9 Fury landing pages for the new Fiji GPU powered parts are both blank. Sapphire does have all the details filled in on the Radeon 300 series cards though and at first glance it does appear that many of the cards are used GPU cores that were available on the current Radeon 200 series cards with slightly higher clock speeds on the GPU.

Of those cards the flagship model currently appears to be the Sapphire Tri-X R9 390X with 8GB of GDDR5 memory on a 512-bit memory bus and a beefy looking Tri-X GPU cooler. The card appears to be using the Hawaii XT GPU as it has 2816 Stream processors running at 1055MHz. The Sapphire Tri-X Radeon R9 290X also has 2816 Stream Processors that are clocked at 1020MHz and is priced at $374.99 at Newegg with a copy of Dirt Rally.We aren’t sure what the memory clock is on this card, but it appears that the Sapphire Radeon R9 390X will be just slightly faster than Radeon R9 290X with a GPU cooler that has a fresh look to it.

Next up is the Sapphire Nitro 390 with 8GB of GDDR5 memory. We’ve never heard of the Sapphire Nitro series, so it appears that Sapphire is coming out with a new line of graphics cards with that name. The Radeon R9 390 appears to have 2560 Stream Processors that are clocked at 1010MHz.  This leads us to believe that the Radeon R9 390 is using the same Hawaii Pro GPU core that is used on the Radeon R9 290 since the core counts are the same.  Sapphire doesn’t currently have an Radeon R9 290 8GB video card in the market, but they do have a Radeon R9 290 Tri-X 4GB model that has 2560 Stream Processors with a 1000MHz core clock for $239.99 after rebate.

After that we have the Sapphire Nitro R9 380 4G D5, which has 1792 Stream Processors clocked at 985MHz. This is exactly the same core count as the AMD Radeon R9 285 with the Tonga GPU. When the Tonga GPU was released in late 2014 it had a 918MHz base core clock and had a 256-bit memory bus. The AMD Radeon R9 380 appears to be using the same core with higher clock speeds that were likely achieved through process improvements made over time.

What happened to AMD’s Grenada GPU and the Radeon R9 380X? We aren’t sure, but chances are we’ll find out soon!

Lastly, there is the Sapphire Dual-X R7 360 that has 768 stream processors and a 128-bit bus for the 2GB of GDDR5 memory. That sounds like the Bonaire GPU that was used on the Radeon R7 260X that was originally launched with a 1100MHz core clock. The Radeon R7 360 is clocked at 1060MHz, but has the same number of cores

Sounds like AMD did indeed re-use most all their 200 series cores on the 300 series cards. We all know that the Radeon R9 Fury X and R9 Fury will be using the Fiji GPU, so we are highly anticipating in seeing what the ‘new’ cards will have.

[Editor’s Note:  Sapphire officials have some serious doubts about some of the information reported above and said that much of the information may be from “placeholder” or “dummy” information not meant for consumer consumption.  Of course we will update this post once we get official information from AMD and/or Sapphire.]