SanDisk has announced the successor to their Ultra SSD with the aptly named Ultra II drive. Like its predecessor, it’s aimed at the mainstream notebook and PC user crowd who want to upgrade to an SSD or at least a more modern version. Available in capacities of 120GB, 240GB, 480GB and 960GB, SanDisk is shooting for the $0.50 per GB that we’ve seen with a few other drives recently which should make them extremely competitive in the marketplace. Bundled along with the drive is their drive Dashboard software which we found to be an excellent tool along with EZ GIG IV cloning software, and trials of Trend Micro Titanium Antivirus+ antivirus software and Absolute LoJack security software. 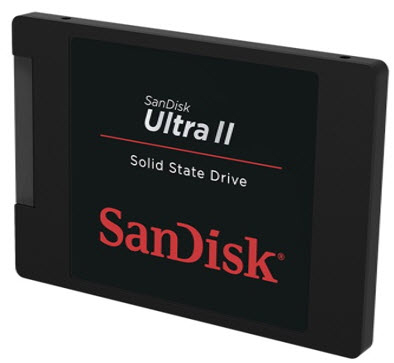 Featuring the nCache 2.0 technology, performance is pretty even across all drive capacities which is unusual as typically the smaller drives can’t keep pace with their larger siblings. Sequential reads are rated up to 550MB/s and writes up to 500MB/s with IOPS at 80K for the 120GB drive and 83K IOPS for the remaining capacities. These numbers all stack up favorably against the current crop of low priced SSDs that have hit the market recently.

SanDisk has also improved power usage to help extend battery life on mobile devices although the exact usage numbers have not yet been provided. We should be getting samples of these soon so look for our hands-on evaluation