“During the second quarter, we strengthened our portfolio with several new product launches in both the retail and commercial channels,” said Sanjay Mehrotra, president and chief executive officer, SanDisk. “We are making steady progress on all operational fronts, and remain focused on enhancing our financial performance.” 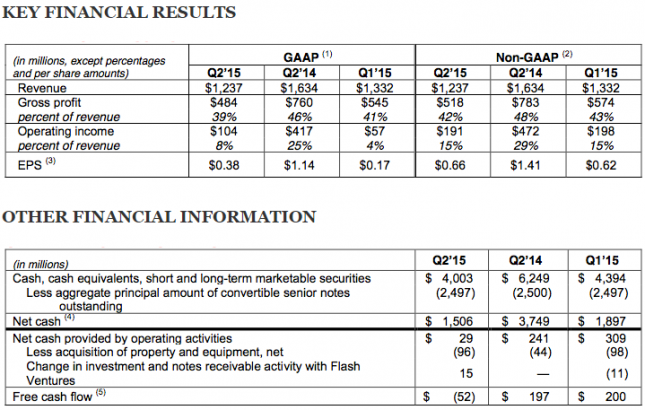 SanDisk’s second quarter 2015 conference call is scheduled for today at 2:00 P.M., Pacific Time, Wednesday, July 22, 2015. The conference call will be on live webcast and can be accessed from SanDisk’s investor relations website at www.sandisk.com/IR. To dial into the live call, please dial 719- 325-4800 and provide the password 3235993. Participants are encouraged to dial in at least 10 minutes before the call commences. Supplemental information and slides that accompany the web broadcast will be available on the SanDisk’s investor relations website at www.sandisk.com/IR after the prepared remarks. A copy of this press release will be furnished to the Securities and Exchange Commission on a current report on Form 8-K and will be posted to SanDisk’s website prior to the conference call.

SanDisk Corporation (NASDAQ: SNDK), a Fortune 500 and S&P 500 company, is a global leader in flash storage solutions. For more than 25 years, SanDisk has expanded the possibilities of storage, providing trusted and innovative products that have transformed the electronics industry. Today, SanDisk’s quality, state-of-the-art solutions are at the heart of many of the world’s largest data centers, and embedded in advanced smartphones, tablets and PCs. SanDisk’s consumer products are available at hundreds of thousands of retail stores worldwide. For more information, visit www.sandisk.com.

(3) Non-GAAP shares are adjusted for the impact of expensing share-based compensation and include the impact of offsetting shares from the call options related to the convertible senior notes.

(5) Free cash flow is defined as net cash provided by operating activities less (a) acquisition of property and equipment, net, and (b) net investment and notes receivables activity with Flash Ventures.