Last month at the 2009 Consumer Electronics Show, SanDisk announced their new 16GB “Mobile Ultra” memory cards in the microSDHC and Sony M2 formats. The microSDHC card is rated SD class 4, which means that under perfect operating conditions that the card will feature, at minimum, 4 MB/s (26x) write speeds. In layman’s terms, this little microSD should have more than enough speed for ultra-small mobile phones and other devices. With more consumers storing media-rich files such as music, videos, and photographs in compatible mobile phones, the need for more storage is high, so the arrival of the 16GB microSDHC cards are a welcomed addition to the market. SanDisk microSDHC cards are available in 4GB, 8GB and 16GB capacities, but today we are taking a closer look at the 16GB monster. 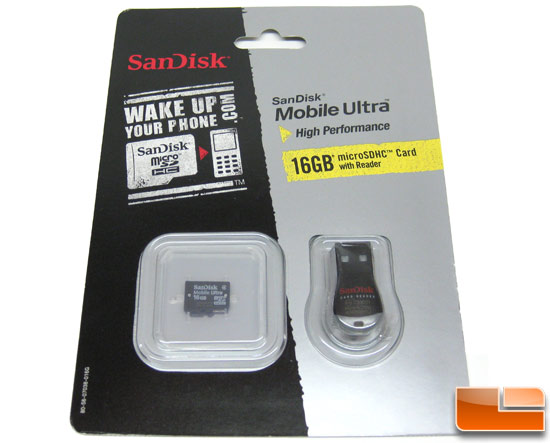 The Sandisk 16GB Mobile Ultra microSD card (part number SDSDQY-016G-A11M) comes with a Sandisk MobileMate Micro card reader makes switching devices simple. By inserting the microSD card into the MobileMate it can then be used in a computer or any device with an open USB port. This feature is nice for those that want to take pictures straight from their phone and look at them on a TV or digital picture frame as it can be done in seconds and nothing else needs to be purchased. Both the microSD card and the MobileMate are backed by a 10-year limited warranty, so your purchase will be covered if anything happens during that period of time. 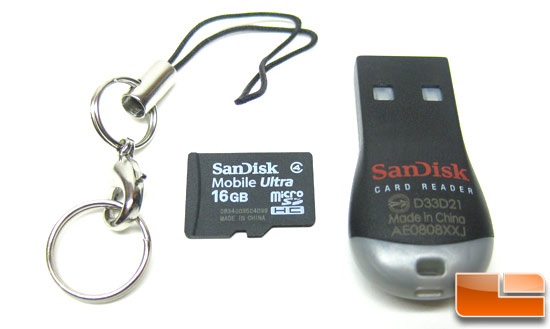 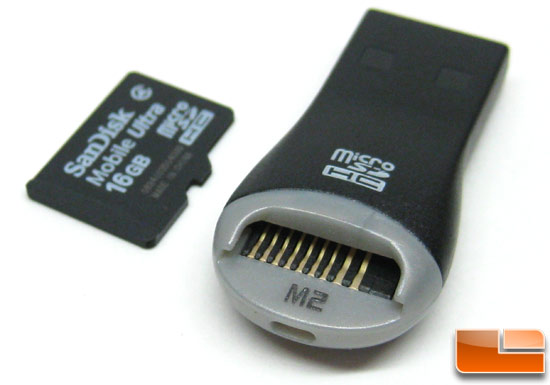 The memory card is bundled with a MobileMate Micro Reader that plugs directly into a USB 2.0-compatible port, enabling quick transport and easy management of digital content without the need to purchase additional equipment. This is a good thing as by SanDisk’s own estimates, 16GB of storage space is good for 4,000 songs at 128Kbps or 54,000 2 megapixel photos. It also means over 4.5 hours of HD video with our company Canon video camera. That’s a lot of storage space and it is likely you will be moving those files around. If you are like us and love to watch movies on devices like the BlackBerry Bold, you will be happy to know you can fit entire seasons of shows on this 16GB drive! 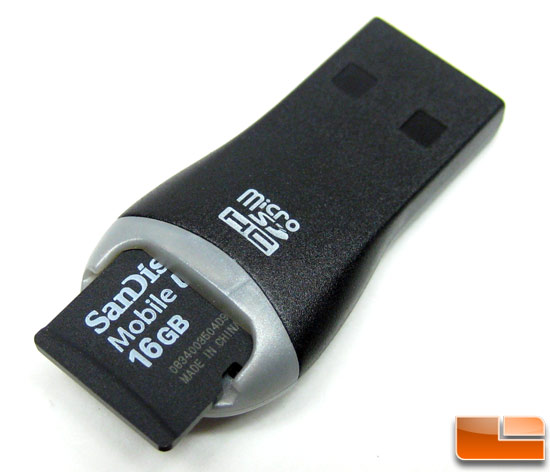 Here is a shot showing the 16GB SanDisk Mobile Ultra microSDHC being inserted into the business end of the MobileMate Micro Reader. Nothing other than pressure physically holds the microSDHC card into the reader, so if you plan on using it on the go as a USB 2.0 Flash drive be sure that it doesn’t get banged around and slip out.