The Issue Is The Firmware 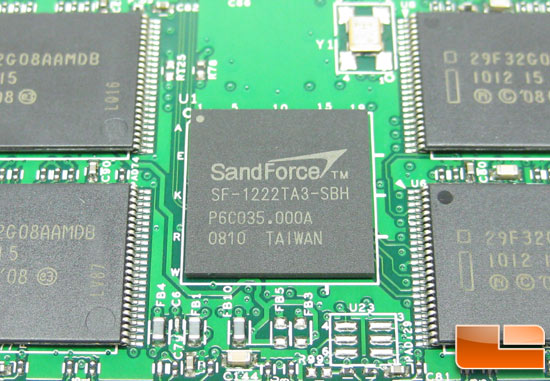 I have been asked that question numerous times in recent weeks and to be honest it’s a great question. Rumors were going around that OCZ Technologies had a special firmware revision that uncaps random 4K write performance on their Vertex 2 series, but other companies like Corsair offer Sandforce SF-1200 series controllers in their Force series and do not have the performance cap. Then at the same time we did see the 4K random write limitation on Mushkin’s Callisto series. To be honest the firmware situation with Sandforce drives is confusing so we went straight to Sandforce to try to get some answers.

I started off by asking Sandforce if that could send me a history and change log of their firmware versions that have been issued for their SF-1222
based drives.

The answer I got was this:

“We only publicly release information on mass production firmware versions. To date we have released MP1 on SF-1222. MP2 for SF-1222 and SF-1564/5 is just around the corner” – Sandforce Marketing

That didn’t sit well with me as it is fairly well known that some Sandforce drives are being sold today with Release Candidate (RC) firmware versions. I shot back more questions to Sandforce saying how it is rather upsetting that I can’t get a list of firmware versions that they have been developing for their customers and that this information should be released to consumers so they know exactly what they are buying.

“We don’t sell drives, we sell a solution that is a part of an SSD. We’ve been very clear to all of our customers in terms of our guidance for firmware usage (see slide below we give to customers). Some customers do their own qualification testing and make a determination when a particular version of firmware meets their products’ specifications and requirements. Occasionally that has been RC, however as you’ve probably experienced we’ve enabled our customers to have a robust field FW update capability so any issues customers run in to can generally be addressed. To date we don’t have a single field failure from our MP1 firmware (at least one that has been reported to us).” – Sandforce Marketing 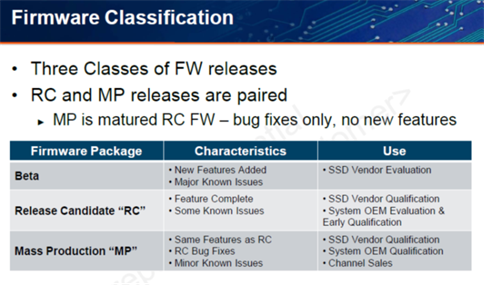 This chart is shows that internally that Sandforce has three firmware types, but it doesn’t help explain what the firmware is on the drives that review sites are reviewing or the drives that you are buying this very second. It also appears that they are leaving it up to their customers to pick and choose what firmware versions they want to release and that RC firmware packages have been released to the channel even though their classification doesn’t list those firmware versions as being channel ready. Still digging for the truth from Sandforce I asked what is the MP firmware revision for the Sandforce SF-1222 controller and was told something mildly shocking.

“It’s a bit confusing because drive manufacturers have the ability to change FW names that are reported to customers. For us our MP1 is 3.0.5. We have a business model where we support customized firmware for customers under a compensation model. All of our OEM engagements require customized firmware to optimize for their platforms, and a number of the e-tailers have sought out customized fw to differentiate themselves in the market. The details of the firmware is often confidential and as such I’m not at liberty to comment on what each customer has in terms of custom firmware. You’ll have to work with individual SSD manufacturers on the detailed capabilities of their products.” – Sandforce Marketing

Did Sandforce just say it was confusing? By golly I think they just did and it also appears that to get the latest firmware version without the 4K random write performance cap that you need to pay for it!  This means that firmware v3.0.5 for one company might be slightly different than firmware v3.0.5 for another company.  In fact we confirmed that some companies have customized the Sandforce provided firmware, but didn’t change the firmware number.  It also turns out that drive manufacturers have the ability to change
the name of the firmware versions that they are given by Sandforce making it even more complicated knowing what firmware is on your drives. 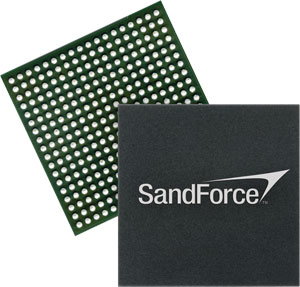 “I just talked with my connections and SandForce and unfortunately, I am limited by our non-discloure agreement on the firmware. I’d really like to help you out, but my hands are legally tied…”

All of the companies were down right scared to talk to me over e-mail or send me any firmware information they had. We then made a few calls and got several of the companies to talk over the phone anonymously. Right now you have two sets of firmware releases for the SandForce SF-1222 controller that are differentiated by the over-processioning profile used by the drive. You either have a drive with a 28% or 13% over-provisioning (OP). To make OP settings even more confusing the 13% OP firmwares are called 7% internally by Sandforce for some strange reason. The math doesn’t add up on that as If you take a Mushkin Callisto 60GB SSD you’ll find that it has 55.8GB of free space. The drive has 64GB of MLC NAND on it, so that means 8.2GB or 13% is being reserved for OP. To further complicate things none of the companies that sell Sandforce drives have firmware information or change logs on their sites, so this is what I managed to come up with after a few phone calls and research on the internet.

Firmware v3.0.1 is rumored to be the fastest and up to 50,000 IOps when it comes to 4K write speeds, but has a power issue when certain PCs go to sleep as the drive won’t wake back up. We were told that this is mainly a Mac issue. The only company that we know is shipping drives with this firmware is Corsair, but they fixed the power issue by disabling the lowest power state of the SSD and by doing so was was able to retain the 4K write performance. Not a lot of information is known about v3.0.2 since SandForce, but it has been seen on A-DATA S599 drives. Mass Production (MP) firmware is v3.0.5 and it is being used on the OWC Mercury and the OCZ Vertex 2 series.  Only a few companies are using 13% OP firmware, but of the two that are both are shipping different firmware revisions. We were told that firmware 3.0.C has better bad block management, improved power management, and improved S.M.A.R.T. diagnostics.  To complicate things SSD companies have started to rename the firmware.  For example the OCZ Vertex 2 100GB firmware that comes on the drive is v1.0, but it is really v3.0.5. The Corsair Force 100GB is 0.2, but we know that is really v3.0.1 with the bug fix. As you can see figuring out what firmware is going to be on the drive you have is going to be interesting.

Good luck trying to pick a drive as right now not one company offers a firmware update utility or newer firmware than what is shipping on their drive.  Down the road a firmware update utility is expected and we can only keep our fingers crossed that all six of the companies listed above will provide change logs letting consumers know what firmware they are using and if they have done anything custom in the settings.The only Sandforce drive on the market today that has a firmware update for it is the OCZ Vertex LE and it is non-destructive.  I only hope that all Sandforce firmware updates will be non-destructive as it makes me nervous seeing release candidate SSD firmware versions on my readers primary storage drive and they know nothing about it.

Legit Bottom Line: For Sandforce to gain the trust of consumers they need to be open with their firmware changes and make sure their customers let consumers know exactly what the are buying!