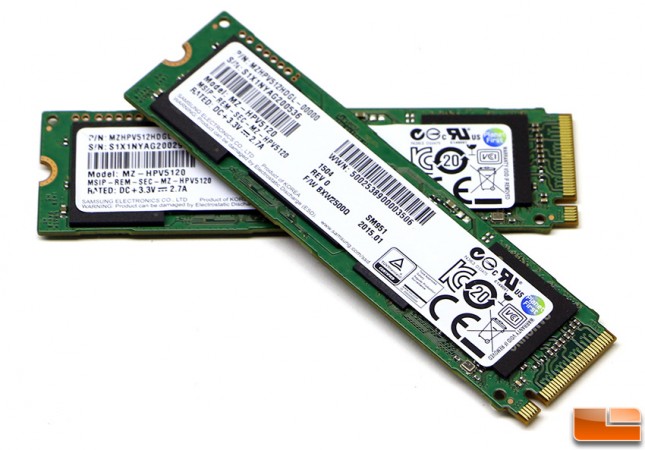 The performance numbers speak for themselves on this look at two Samsung SM951 512GB M.2 PCIe SSDs in RAID 0. The advantage to using the PCI-E bus over the SATA interface is more obvious now than ever and it really looks like PCI-E storage will be where all enthusiasts will be headed in the months and years ahead. On our Intel X99 test platform we were able to get sequential numbers on ATTO up to 4176 MB/s on the read test and 3166 MB/s on the write tests with the stock Queue Depth setting of 4. IN CrystalDiskMark we managed to hit 4510 MB/s Read and 3147 MB/s Write in the sequential test with a Queue Depth of 32. These numbers show that a pair of these drives together in RAID 0 really book it! Just keep in mind that these drive do run very hot and that you need to place a fan over them or maybe some small heatsinks to keep the drives from overheating and throttling!

With regards to pricing you are looking at $499.95 a pop for the Samsung SM951 M.2 PCIe SSD if you wanted to run out and buy one right now. That means you are looking at $990.90 for the setup that we are using today. It’s not the cheapest setup around, but if you want a storage drive that is really fast, relatively affordable, the Samsung SM951 is it. Now we just need an affordable hardware M.2 RAID solution that we can boot off of!