Several owners of the Samsung 960 Pro NVMe SSD have reported on various hardware forums that a firmware update provided by Samsung for the drive has caused various issues, from performance degradation to OS instability. There are IO-related issues where the OS will get stuck at 100% for the 960 Pro read and write activity, even with the drive not performing any actual data transfer. It seems that the issues are most prevalent when using the Samsung NVME driver and that the freezing and stuttering are reduced when using the Windows standard NVME driver. We contacted Samsung and they provided this update:

Samsung is aware of the issue with the Samsung 960 PRO SSD and the latest firmware version (3B6QCXP7). Samsung is working to solve the firmware issue, and those affected should contact Samsung customer service at Samsung.com/US or via phone at 1-800-726-7864. 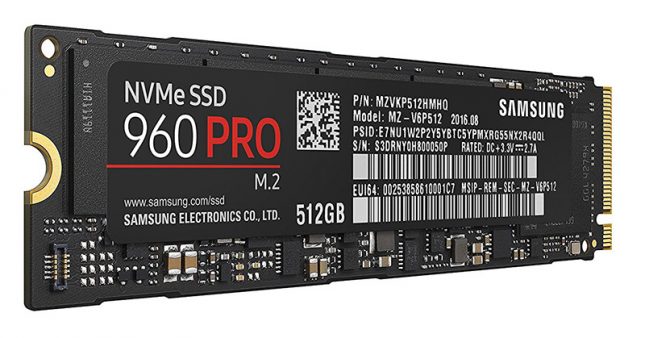 The affected version 3B6QCXP7 firmware for the 960 Pro is no longer available on the Samsung SSD Tools website, or via the Samsung Magician software. Unfortunately, consumers who already have programmed their drives with firmware version 3B6QCXP7 have no recourse at the moment, as there is no official way for consumers to flash their SSD’s to previous versions of the firmware. The Samsung 960 Pro is a very popular NVMe drive, offering industry-leading performance, so seeing a firmware that cripples it is really unfortunate and we hope that Samsung can get a fix rolled out as soon as possible. Currently, only the Samsung 960 Pro model seems to be affected, with the EVO models not having any issues of note. I have not had any issues with my 960 Evo 250GB OS SSD or secondary SSD, which are both on a Z370 platform. I spoke with Nathan and he hasn’t updated his 960 PRO’s to the affected firmware, so never came across the issues, personally.

Samsung hasn’t told us much about the issue and it would be nice to know why it is happening and how many drives are affected. It is a good idea to avoid firmware updates unless they address an issue specific to you, as issues like this aren’t entirely uncommon across a variety of devices, with firmware and BIOS updates often bringing new features and fixing certain issues while breaking others.

Do you own a 960 Pro SSD that has been affected by faulty firmware? Let us know in the comments!