Samsung 870 EVO – The Definitive SSD For Every Need

Samsung hasn’t forgotten about all the 2.5-inch SATA SSD users out there and just today introduced the 870 EVO SSD series. Designed with improved performance and reliability, this drive is aimed at all users that are interested in rocking a 2.5-inch form factor drive.

The SATA III interface has been bottlenecked for years, so the fact that the 870 EVO series tops out with sequential read and write speeds of 560 and 530MB/s should shock no one. What is interesting about the new 870 EVO is that it has 38% higher random read performance speeds than the previous 860 EVO model. Curious how Samsung was able to pull off such a feat? They are using the company’s latest V-NAND 3bit MLC (TLC NAND Flash) and MKX controller that was all designed in-house. These improvements are said to deliver enhanced user experiences when multi-tasking, web browsing or simply booting up a PC.

When it comes to capacities there are five 870 EVO drives to pick from ranging from 250GB all the way up to 4TB. This allows you to pick the right capacity for your needs or pick one that fits your budget.

All are backed by a five-year warranty and healthy endurance ratings of 250 TBW for every 250GB of storage space. 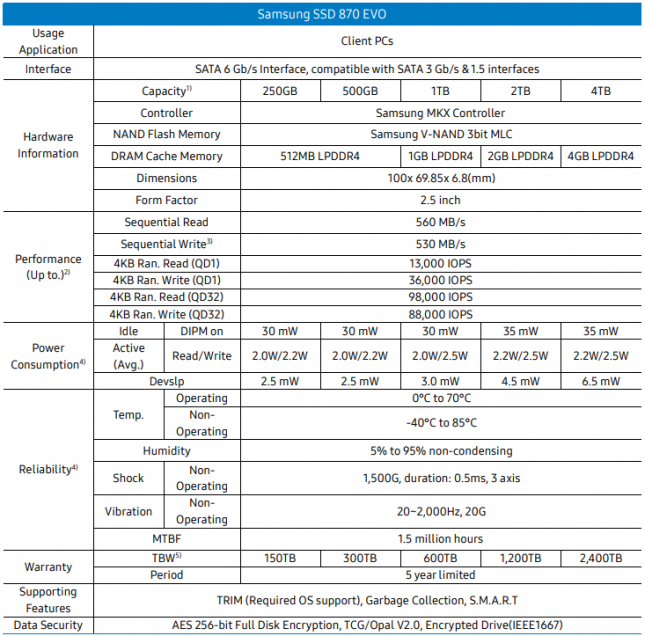 It should be noted that Sequential Write performance measurements are based on Samsung Intelligent TurboWrite technology. The sequential performance measurements after Intelligent TurboWrite region is filled up are 300 MB/s on the 250/500GB drives and 530 MB/s on the 1TB/2TB/4TB drives. So, if you are on the fence between the 500GB and 1TB models that might be enough for some to move up to a 1TB model.

These speeds are actually pretty impressive as the 870 QVO series drops down to just 80 MB/s on the 1TB drive and 160 MB/s on the 2TB and up capacities! If sustained write performance is important to you the new 870 EVO Model offers substantially faster write speeds. 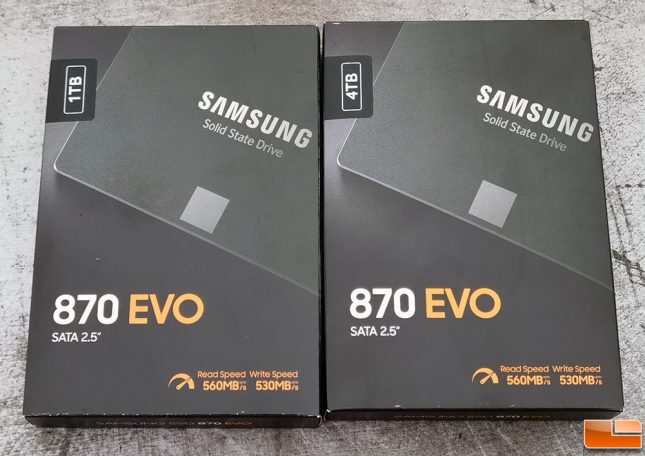 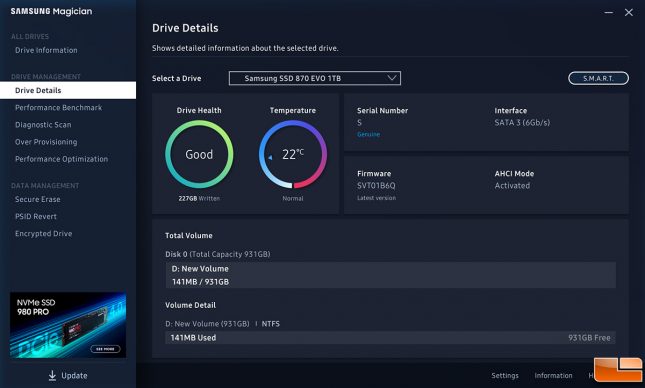 Samsung has made upgrading an existing system to this model super easy as they include data migration software. The Samsung Data Migration Software can be downloaded here along with the latest version of Samsung Magician 6. Samsung Magician 6 software helps you monitor and manage your SSD! 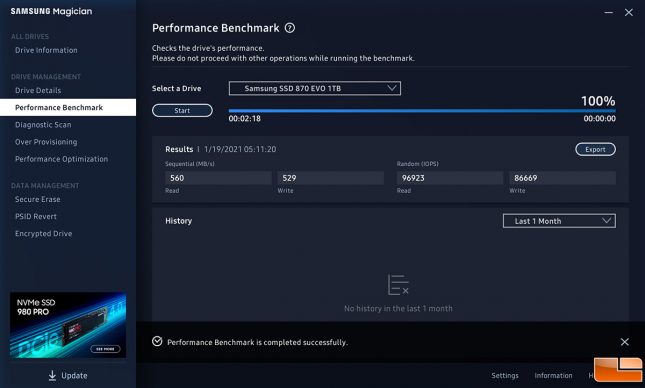 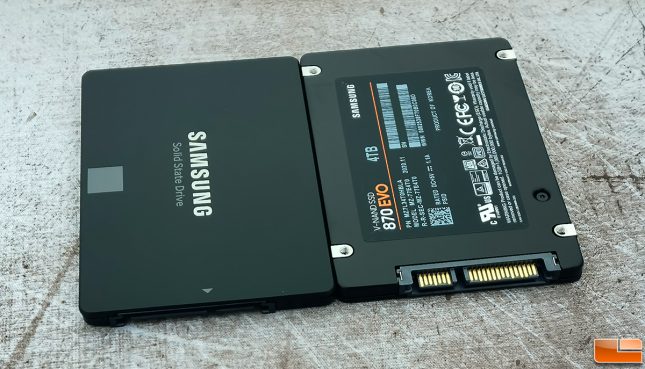 From the outside the Samsung 870 EVO looks like pretty much any other 800 series EVO drive from Samsung. They kept the 2.5-inch enclosure black with a 7mm z-height and gray accent color. 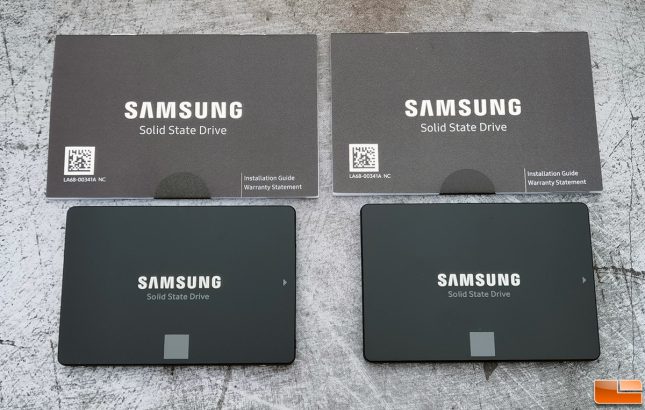 To test the Samsung 870 EVO we’ll be focusing on benchmarking the 1TB model against other 1TB models in the 870 QVO and 860 QVO series. Samsung only sent over the 860 EVO in 500GB and the 860 PRO was 2TB, so we don’t have either of those series in a 1TB capacity. It would have been nice to compare the massive Samsung SSD 870 EVO 4TB to other 4TB models, but this is the only 4TB SATA SSD model that we have. We wanted to give you some comparison numbers to help aide your purchasing decision.

Where we do see a difference is on Random 4K Read performance at QD1. The Samsung 870 EVO 1TB is getting 33% faster random read performance than the 860 QVO 1TB that was launched in 2018. It also gets about 18% better performance than the Samsung 870 QVO 1TB that was introduced in the middle of 2020. Keep in mind that Samsung’s 860 QVO and 870 QVO SSD series both use quad-level cell or QLC (4-bit) NAND Flash and the 870 EVO uses Triple-Level Cell or TLC (3-bit) NAND Flash.

ATTO showed shows that sequential performance between the 860 QVO, 870 QVO and 870 EVO are all pretty much the same. They stop out at around 535 MB/s read and 506 MB/s write.

We ran ATTO Disk Benchmark with the file size set to the default size of 256MB. We manually set the file size in AJA System Test to 16GB. The results here showed that the each drive had 528 MB/s read and 500 MB/s write speeds.

PCMark 10 has a storage benchmark built-in that tests relevant real-world traces from popular applications and common tasks to best look at SSD performance. We ran the quick system drive benchmark. This test has 6 traces, running 3 passes with each trace. Adobe Photoshop, Microsoft Excel and Adobe Illustrator are some of the applications used in the test. 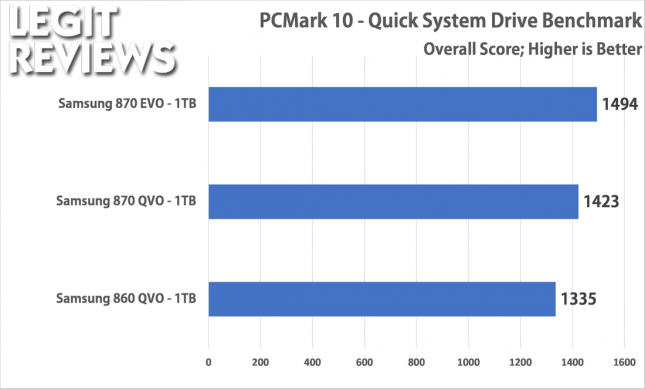 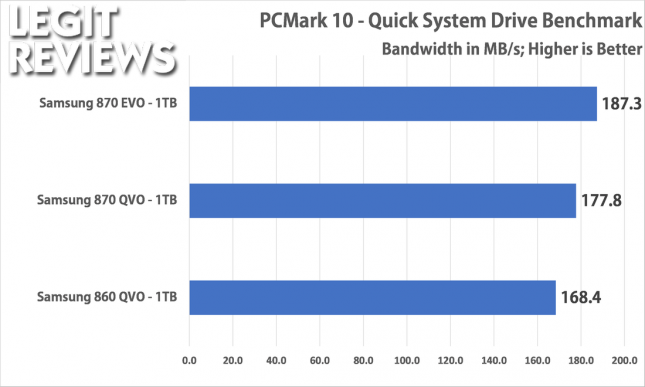 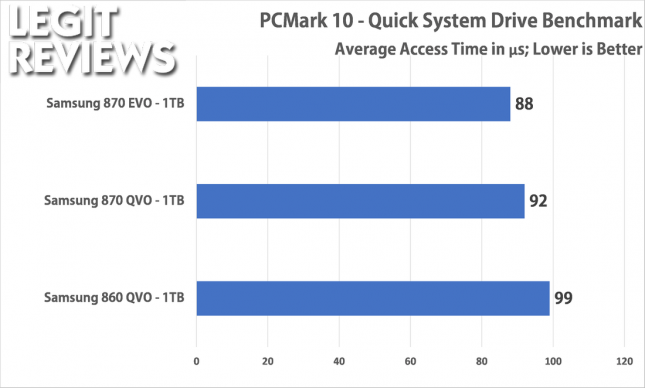 The sub-scores of the PCMark 10 test might be interesting to some, so we included secondary metrics like bandwidth and average access time. The Samsung 870 EVO does well here and it is likely due to the improved Random 4K read performance. 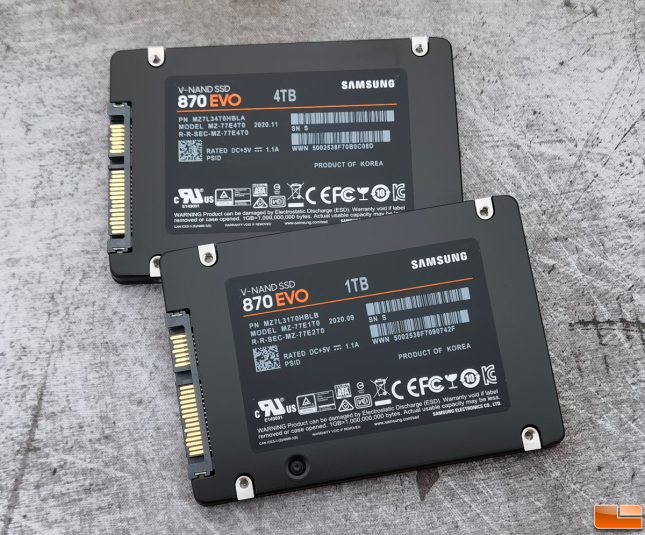 The Samsung 870 EVO appears to be an excellent choice for anyone that is looking for a good 2.5-inch SATA III drive. This drive can handle all sorts of tasks and is perfect for everyday computing. It should meet the requirements for any PC user. So, as long as it fits the 870 EVO shouldn’t let you down.

When it comes to performance, we had no problems hitting the drives rated speeds of 560 MB/s read and 530 MB/s write. The Random Read performance at QD1 is greatly improved and that is important for those that will use this as a boot drive.

Many will be looking to purchase this model due to the fact that it has the latest TLC SSD from Samsung. The Samsung 870 EVO with TLC NAND is backed by a 5-year warranty and the 870 QVO with QLC NAND comes with a 3-year warranty. The endurance of an 870 EVO 1TB drive is 600 TBW versus 360 TBW on the 870 QVO. The 870 QVO is all about delivering a massive amount of storage space at the best possible price whereas the 870 EVO offers better performance and endurance.

The Samsung 870 EVO is a great SATA III drive and will appeal to those that want the robustness of TLC NAND Flash!