Sabrent has been making waves in the SSD market by releasing a slew of different drive series to market covering all sorts of consumer needs. One of their latest drives is the Rocket Q4, which uses QLC NAND Flash along with the PCIe Gen 4.0 interface. Sabrent is one of the first to offer a Gen4 SSD with QLC NAND Flash. That combination on the Rocket Q4 series is capable of 4,900 MB/s read and 3,500 MB/s write speeds when it comes to sequential performance and Random 4K peaks at up to 700,000 IOPS!

The Sabrent Rocket Q4 is available in 1TB, 2TB and 4TB capacities as Sabrent continues to be one of the very few storage drive makers that has been bringing larger size SSDs to market. All Rocket Q4 drives are powered by the Phison PS5016-E16 Gen4 SSD controller and are using Micron 96-Layer QLC NAND Flash memory.

Performance does vary depending on the capacity of the drive that you are looking at getting, so those that want the best performance will want to spend some time looking at the specifications table above. The Rocket Q4 1TB drive tops out at just 1,800 MB/s for sequential write speeds and 180,000 IOPS for Random 4K read performance. These two performance areas are about half of the speed of the larger Rocket Q4 2TB. So, spending more money for a larger 2TB drive will not only double the storage space, but also some of the performance characteristics.

The endurance ratings are 200 TBW for the 1TB model, 400 TBW on the 2TB and 800 TBW on the largest 4TB drive. These numbers are comparable to those seen on other QLC based drives as is the 5-year warranty. 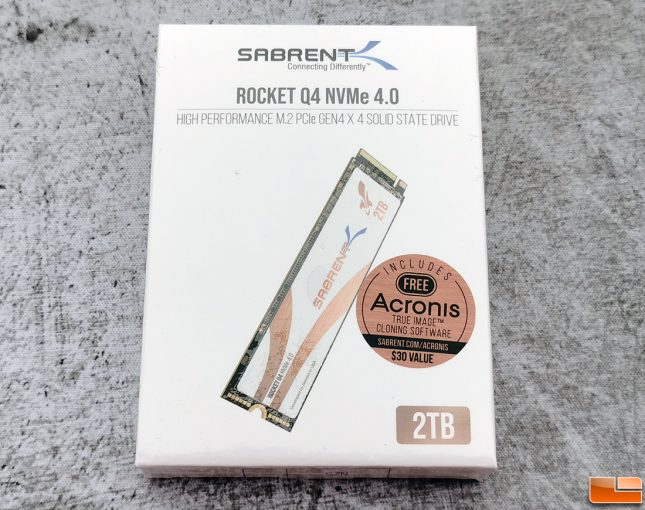 Sabrent sent over the Rocket Q4 NVMe 4.0 2TB SSD model for us to test on our AMD Ryzen X570 platform. The part number on the drive that we received was SB-RKTQ4-2TB and is available for $319.99 shipped.

The retail packaging on all Sabrent drives is the best in the business. After you remove the shrink wrap you’ll find a full color box and then inside of that, there is a metal tin that holds the drive and the paper guide. The metal box can be re-purposed or saved to store spare drives. The unboxing experience for a Sabrent SSD is unrivaled by anything else on the market today. 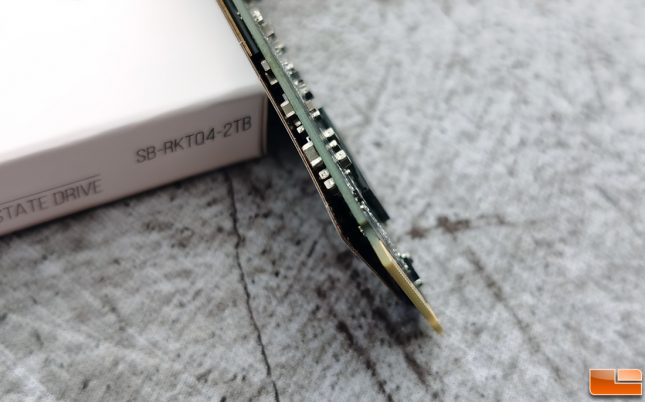 Sabrent uses the standard M.2 2280 gum stick form factor and the 2TB model is a double-sided drive. Sabrent went with a black PCB for this drive and the label has a white and copper finish. The label also doubles as a heat spreader since it contains a thin piece of conductive metal inside. So, dont remove it!

Here is another shot of the front of the drive.

And one of the back of the drive as there are two QLC NAND Flash chips on the back along with one of the 8Gb SK hynix DDR4 memory ICs for on-board cache. This memory chip is rated for operation at 2666MHz with CL19 timings, but we aren’t sure what Phison and Sabrent set this one to run at in the firmware. 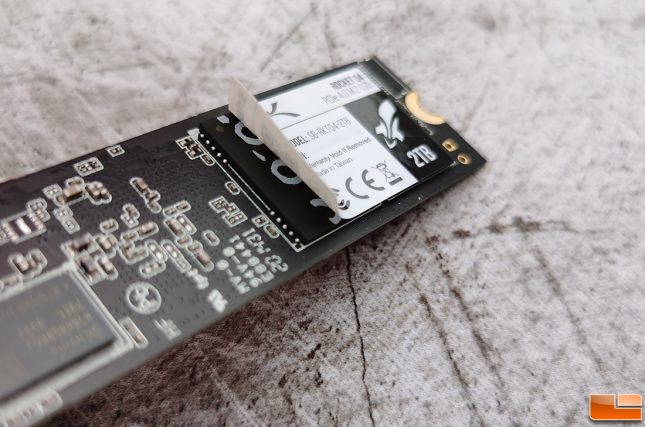 We peeled back the sticker off the top of the drive to see what the Micron 96-Layer QLC NAND Flash looks like and found that Sabrent is using special labels that show if they have ever been removed. You might not want to do this at home! 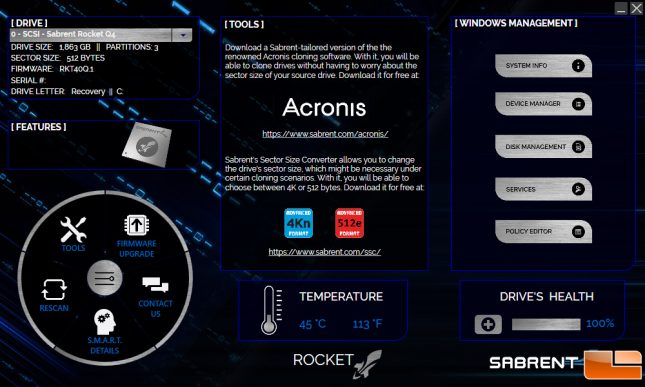 You can also downloaded Acronis True Image cloning software for free. This software makes replacing an existing drive really easy as you can use it to clone the old data over to the new drive. A third utility offered is Sabrents Sector Size Converter. This converter is a small application that gives you a free and easy way to change your drives sector size, which may be necessary under certain data cloning scenarios.

Let’s take a look at the test system and then show you how the Rocket Q4 2TB SSD did on a bunch of different performance tests!