Rough Times Have Mad Catz Facing Delisting from the NYSE

Mad Catz Interactive recently received notice from the NYSE that due to the Companys current low selling share price, the Companys continued listing on the NYSE MKT is contingent upon completing a share consolidation or by being able to get the share price up within the next six months. The notice is obviously one that no company wants to get, but Mad Catz still has some time to turn the ship around. In fact, they already announced that they are planning a reverse stock split. Mad Catz Interactive trades under the NYSE symbol MCZ and was trading at $0.1308 when we just happened to take a look at it this afternoon. 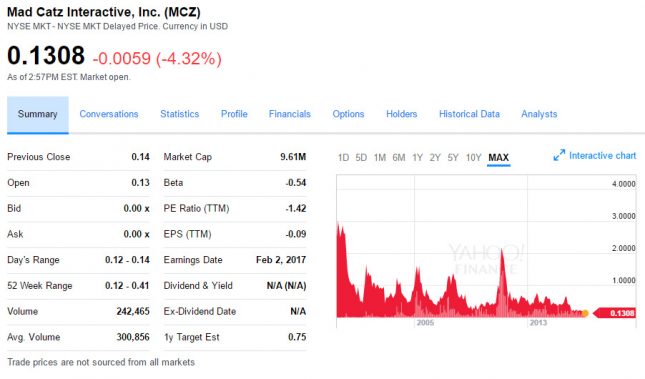 Mad Catz recently sold off the Saitek brand of flight control systems to competitor Logitech for $13 million in cash in a deal that also sent eight Saitek research & development team members to Logitech. Mad Catz purchased U.K.-based Saitek in 2007 for $30 million. 2016 was a year of change as the company’s CEO, general counsel and Chairman all resigned and 37% of its staff was let go. Mad Catz investing into a deal with Harmonix for Rock Band 4 and turning that April 2015 deal into an $11.6 million loss when the dust settled. Rock Band 4 wasn’t a hit and the money lost by Mad Catz looks like it hurt.