Rivet Networks Takes Gaming to the Next Level with the Killer E3100 2.5 Gbps Ethernet Controller. 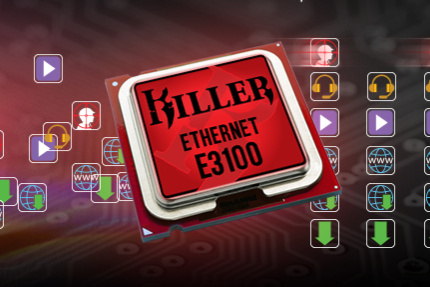 Austin, Texas – (April 2nd, 2020) – Rivet Networks, makers of the award-winning Killer line of networking products, introduces its all-new Killer E3100 Ethernet controller designed for competitive gamers and performance-hungry users. Delivering more performance while using less power, the E3100 is Killers second-generation Ethernet controller that achieves speeds up to 2.5 Gbps. High-performance routers are rapidly moving to support 2.5 Gbps Ethernet, so the Killer E3100 is perfect for gamers who want to take advantage of faster speeds to win more and get the most out of their online experience. The E3100 continues Rivets push to both prioritize critical PC network traffic AND to optimize traffic based on other parts of the network. The E3100 introduces Extreme Game Mode which automatically detects when the network is congested and optimizes the PCs traffic accordingly to maintain a great gaming experience. The Killer E3100 is available on systems from industry leaders such as Acer and MSI.

In addition to delivering up to 2.5 Gbps of throughput, the Killer E3100 delivers incredible speed, intelligence, and control that online gamers will love:

The industry is accelerating the transition to 2.5 Gbps Ethernet, said Rivet Networks CEO Michael Cubbage. Gamers that demand the best need the Killer E3100 to achieve the lowest latency and incredible throughput. With more and more routers and switches hitting the market supporting 2.5 Gbps Ethernet, it is the perfect time for gamers to upgrade.

With MSI laptops featuring Killer E3100, not only do gamers get the benefit of faster gaming connections, enthusiasts and prosumers will also be able to enjoy accelerated connections for home multimedia steaming servers and network storage. said Derek Chen, Sales & Marketing Director of MSI.

Acer continues to integrate innovative new technologies to enhance the gaming experience on our Predator and Nitro devices, said Vincent Lin, Associate Vice President, Product Marketing and Planning, Acer Inc. Network performance is an essential part of online gaming, and the Killer E3100 ethernet controller can give gamers the network connection they need to compete.

If you would like to arrange an interview, a demo, or have questions for the Rivet Networks leadership team, email us at [email protected]

Rivet Networks is a technology and products company that focuses on creating the best possible networking experience. Rivet offers a mix of hardware, software and cloud-based technologies to deliver solutions that are both powerful and intuitive. Through their Killer line of networking products, Rivet Networks offers unprecedented speed, intelligence and control for gamers and performance users alike. For more information about the Killer brand of technologies, please visit http://www.killernetworking.com.