Researchers create holograms that can be seen from any angle

Researchers from BYU have been working on a new projection system that is able to project holograms that aren’t computer-generated. Lead researcher Dan Smalley says his team’s holograms aren’t like in the movies where the projections never existed in physical space. The team’s projections can be seen from any angle and are seen as existing in that space.

The team has created virtual stick figures that can walk in the air. Those stick figures can interact with their environment, and that interaction was shown by having a student place a finger in the middle of the volumetric display. The holographic stick figure was able to walk along the finger and jump off it. 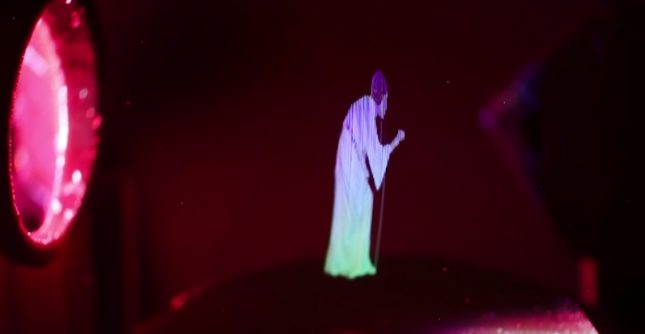 Researchers say that their work overcomes a limiting factor of previous systems. The team has shown its ability to simulate virtual images by employing a time-varying perspective projection backdrop.

“We can play some fancy tricks with motion parallax, and we can make the display look a lot bigger than it physically is,” Rogers said. “This methodology would allow us to create the illusion of a much deeper display up to theoretically an infinite size display.”