Today we will be taking a look at GPU performance in Redshift. Redshift claims to be the world’s fastest biased renderer and is used by many professionals. We’ve noticed that many artists are looking to integrate Redshift into their workflow with applications like Houdini, Cinema 4D and Maya rather than using high-end CPU rendering solutions. The gaming industry heavily uses Redshift with Ubisoft using it to create their cinematic trailer for the game title ‘For Honor’ and Blizzard Entertainment uses Redshift to create their short films to introduce new characters in Overwatch. The growth of Redshift rendered animations has grabbed our attention and we wanted to test out some of the latest graphics cards to see how they perform.

To measure the render performance of graphics cards we’ll be turning to the benchmark included in the demo version of Redshift 2.6.23. It should be noted that Redshift currently only supports CUDA-compatible cards with 2GB of VRAM or more. Redshift does not support OpenCL. This unfortunately means that AMD GPUs are not supported and that Redshift will only work with NVIDIA GPUs. The good news is that all recent CUDA cards are supported (Maxwell, Pascal, Turing) and that means a wide variety of GeForce, Quadro and Tesla GPUs are supported by Redshift. 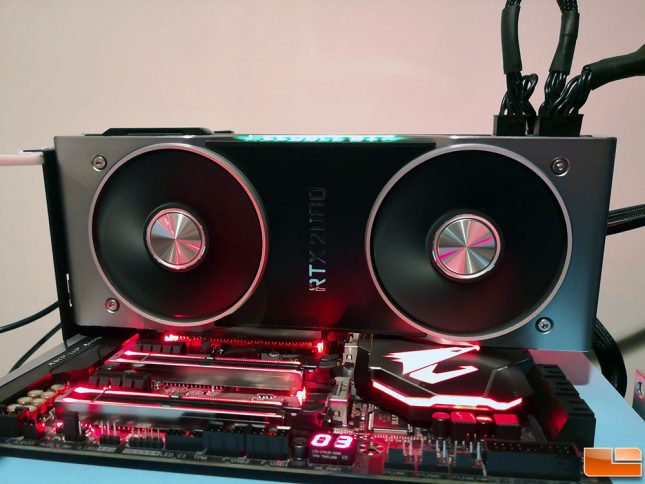 We ran the Redshift 2.6.23 demo benchmark on our normal Intel Z370 GPU test platform that uses an Intel Core i7-8086K 6-core, 12-thread processor on a Gigabyte Z370 Gaming 7 motherboard with 32GB of DDR4 3200MHz memory and a 1TB Samsung SSD 970 EVO M.2 PCIe NVMe SSD. Windows 10 v1803 64-bit was installed along with GeForce 416.34 drivers and then we simply ran the Age of Vultures benchmark scene that comes with the Redshift 2.6.23 demo. Our results come from the average of three test runs. It should be noted that while Redshift is a GPU renderer the CPU and SSD used do impact the results of the benchmark as textures need to be loaded from the disk and scene data needs to be prepared for use by the GPU.

Without further ado the Redshift 2.6.23 benchmark render times on our test system: 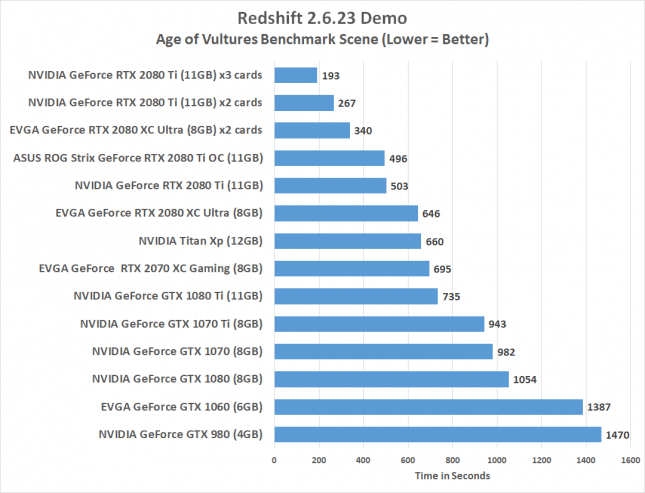 Performance scaling on the GPUs that we tested looks great. The GeForce GTX 980 ‘Maxwell’ card finishes in just under 25 minutes, the GeForce GTX 1080 ‘Pascal’ card finished in just under 18 minutes and then the brand new GeForce RTX 2080 ‘Turing’ card completes the render in under 11 minutes. Adding a second RTX 2080 card to the system drops the render time down to under 6 minutes. Oddly enough when we enabled SLI with the new NVLink bridge the performance was slower at 344 seconds versus the 340 seconds with SLI disabled. The flagship RTX 2080 Ti FE finishes in just over 8 minutes, but that drops to under 5 minutes with two cards and just over 3 minutes with three cards. Amazing performance, but at $1199 each we are talking about $3,600 worth of GPUs here. 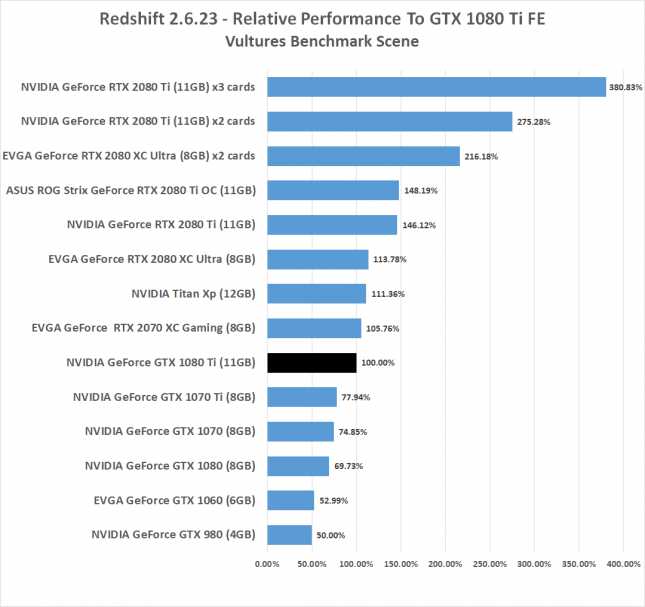 Before we conclude, we should point out that Redshift allows you to use 8 GPUs per session and you can mix and match them since they do not share memory (unless you run SLI). We ran two RTX 2080 Ti cards with an RTX 2080 in our test system and had no issues in Redshift. The performance with this setup was also only 5 seconds behind three matching GeForce RTX 2080 Ti cards. So, the take home message here is don’t be afraid to mix cards! 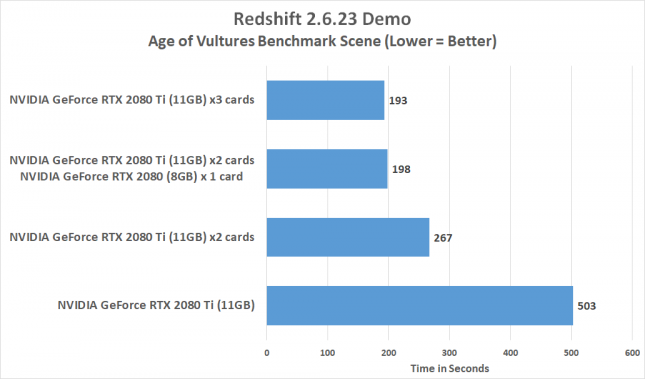 We’ll conclude with some pricing links!

Update 10/25/2018 5pm CT: Redshift sent us a comment about enabling SLI multi-GPU support and we thought we’d share it:

“Redshift does not support SLI. In fact, enabling SLI can actually hamper Redshift performance, so we always tell our customers to disable it. The reason is because SLI is gaming technology, while Redshift is a purely compute application. The two don’t mix. We are aware that the new GPUs support NVLink, but we don’t currently support that yet – although that will be coming soon. When we support NVLink, you should expect better performance with scenes that go out-of-core.” – Redshift

So, that explains why our performance went down with SLI enabled!