Last week, AMD hosted the very first Radeon Technology Group (RTG) summit in Sonoma, California to highlight the new groups plans for the future of discrete graphics. Much of what we were shown is still under embargo, but we are able to discuss where the group is headed with regards to visual technologies today. AMD usually doesn’t like to talk about their future GPU plans in advance, so it was exciting to get a chance to learn where RTG is headed with more transparency than ever before. This is likely because AMDs GPU assets having been reorganized into the Radeon Technologies Group (RTG) that is headed up Raja Koduri.

Before we dive into the material it should be noted that the AMD logo was missing from most all of the presentation material at the event, which was a bit strange as usually the AMD logo is plastered all over the place! 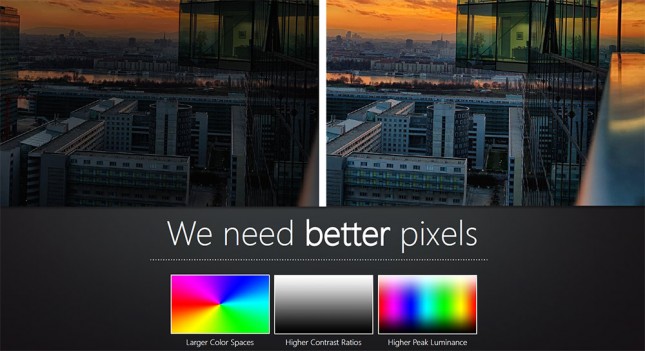 Over the past several years we have seen 4K monitors come down in price to where you can easily pick one up for under $500 when they are on sale. With 4K60 monitors here today and relatively affordable it might have caused some to wonder what it next. AMD believes that we need better pixels and that High Dynamic Range (HDR) monitors are the future. 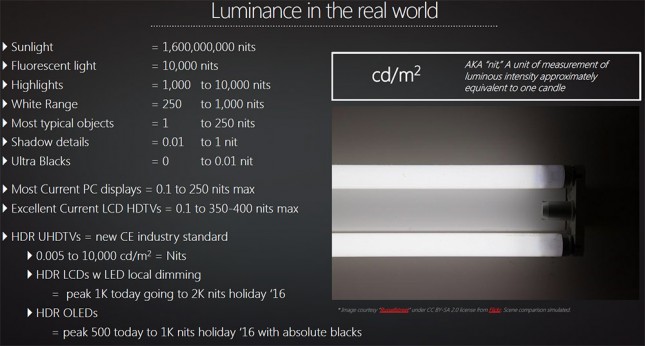 We learned at the RTG summit that the average LCD display in the PC market has a 0.1 to 250 nit luminous value and that high-end LCD HDTVs might be up to 350-400 nits, at most. HDR support is coming to the high-end HDTV market now and the PC panel markers are also starting to get in on the action. These levels really aren’t that high as sunlight is capable of up to 1.6 billion nits and the human eye can accommodate about 30 stops of light or 1,000,000,000:1 from white to black. Basically, our eyes are capable of seeing way more color than our monitors are showing us. 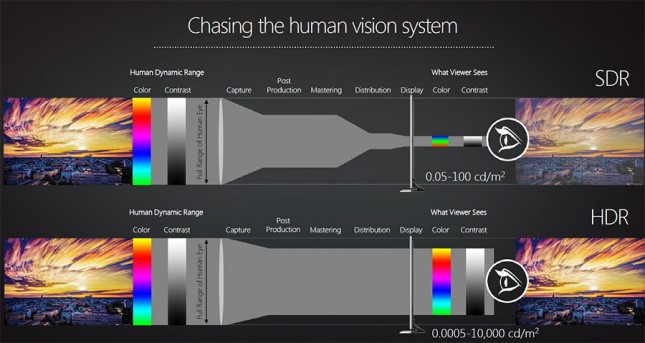 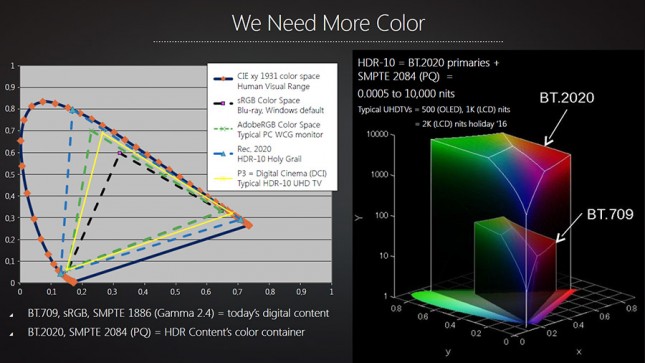 The image above shows the AdobeRGB color spectrum in green and the typical sRGB standard in yellow. The new BT.2020 standard (HDR-10) is shown in blue and you can see it’s much wider and is capable of covering 75.8% of the human visual range. That is a huge step up from the unimpressive 35.9% that sRGB is capable of covering. 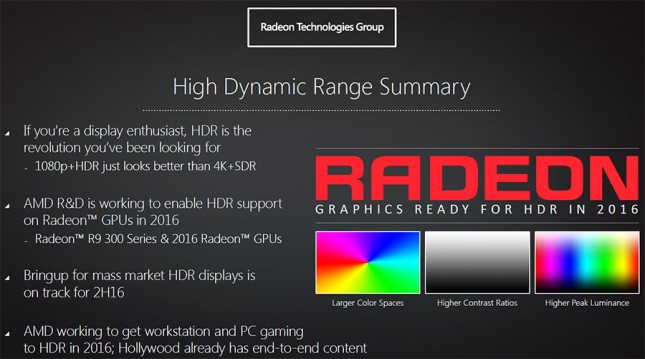 AMD Radeon Graphics solutions will be ready for HDR displays to come to market in 2016 as they are currently working on enabling HDR support on Radeon R9 300 series cards as well as all future cards. AMD expects that we will see HDR displays available in the second half of 2016 and that will be more than enough time for them to get this ready. 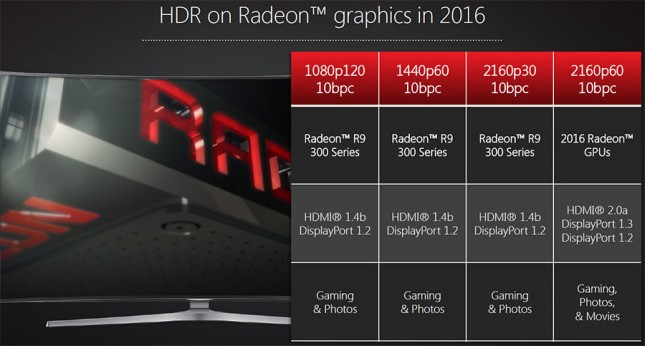 This slide from the presentation shows that current AMD Radeon R9 300 Series cards should be able to support up to 10-bit color channels up to 4K @ 30 FPS with their HDMI 1.4b or DisplayPort 1.2 connectors. Current monitors are only 8-bits, so you’ll certainly need a new display for HDR and not ever BT.2020 or Rec2020 display will qualify as an HDR display. The next generation AMD Radeon 400 series cards will be able to support 4K @ 60 FPS with their HDMI 2.0a or DisplayPort 1.3 connectors. 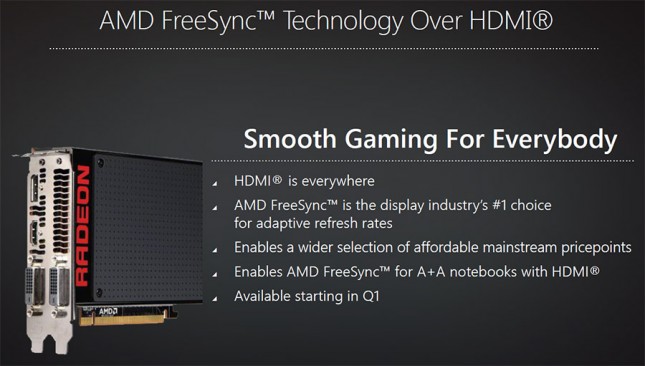 AMD FreeSync has been using DisplayPort since its debut to the market, but earlier this year at Computex 2015 the folks at AMD demonstrated that FreeSync over HDMI could work. The HDMI specification allows for vendor-specific extensions and AMD was able to use those extensions to make it work on HDMI 1.4a for their demo. AMD is hopeful that a standardized variable refresh rate will come to future HDMI specifications, but rather than waiting on the HDMI consortium to put it into a future standard they are steaming full force ahead with FreeSync over HDMI or FS-HDMI as we’ve seen it abbreviated. AMD expects this technology to hit the retail market in Q1 2016 and hopes that it will greatly increase the numbers of monitors that support AMD FreeSync for their user base as well as lower the price point for what one can purchase an AMD FreeSync monitor.

We were shocked to learn that 70% of mainstream monitors lack a DisplayPort connector. DisplayPort has lower licensing fees and should cost less in theory to put on a display, but many of the lower cost monitors still don’t have DisplayPort connectors on them let alone the right scalar and internal hardware for variable refresh rate technology. Since AMD FreeSync will soon work over HDMI and DisplayPort both, it should give monitor OEM’s more freedom to support FreeSync and let them focus more on panel and scalar selections. This technology is currently proprietary and should work with all the cards that currently support FreeSync as well as future GPUs.

AMD already has Acer, LG, MStar, Novatek, Realtek and Samsung on board as technology partners for AMD FreeSync over HDMI. 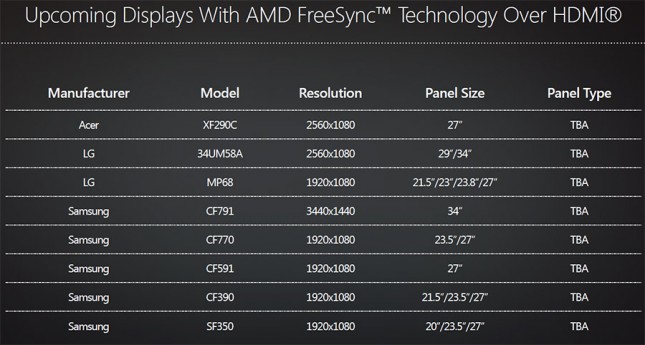 AMD announced during the summit that nine upcoming displays will support FreeSync over HDMI when it debuts in Q1 2016. We aren’t sure if any of these displays will bring FreeSync to the sub-$200 monitor market, but it would be nice to see FreeSync available on monitors at price point. Not only is it good for consumers, but it is also good for AMD in general as it would give them a big advantage in pricing against rival NVIDIA’s G-Sync technology. 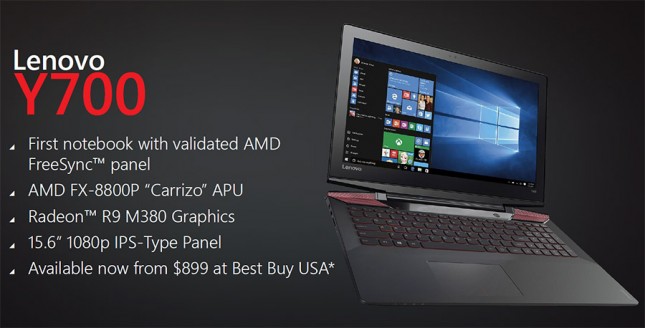 While we are on the topic of AMD FreeSync it should be noted that AMD has introduced their first notebook with a validated AMD FreeSync panel. That notebook would be the Lenovo Y700 that is currently available from Best Buy exclusively for $899.99 with free shipping. The Lenovo Y700 features the AMD FX-8800P Carrizo APU and Radeon R9 M380 Graphics with a direct drive 15.6-inch IPS-Type LCD display and a 40-60Hz dynamic refresh range.

The new AMD Radeon GPU’s that will debut in 2016 will be the first to support DisplayPort 1.3 HBR3 (High Bit Rate 3). DisplayPort 1.3 HBR3 has a total bandwidth of 32.4Gbps of bandwidth with the video data rate being 25.92 Gbps. HBR was 2.7 Gbps, HBR2 is 5.4 Gbps and HBR3 has 8.1 Gbps per channel, so we have been progressing nicely on the bandwidth front. HBR3 provides an impressive 80% more bandwidth than HDMI 2.0 and should allow the use of some really high monitor resolutions. The DisplayPort 1.2 standard has been in use for six years and it will soon be a limiting factor in the race for higher resolutions. When DisplayPort 1.3 was originally thought up we heard the ultimate goal was for DisplayPort 1.3 is to support 8K resolution. This means it could potentially support 7680 4320 (16:9) (33.1 megapixels) or 8192 4320 (~17:9) (35.3 megapixels) displays down the road. This bandwidth also means that you can run a pair of 4K displays with a single cable!

In 2016, AMD believes that we will see a ton of sweet panels coming to market. AMD anticipates that we will have DRR-ready 4K120 panels by 4Q2016 that will support AMD FreeSync with Low Framerate Compensation when used with 2016 Radeon Graphics hardware. They also believe that a single-cable 4:4:4 5k60 resolution panel will come to the market around the middle of 2016. 5K has 78% more pixels than a 4K monitor and the sharpness should be incredible as you have 210PPI on a 28-inch 5K display versus 142PPI on a 28-inch 4K display.

That is all we are able to talk about today, but the AMD Radeon Technologies Group will allow us to tell you about more things in the future and we are pretty sure that they’ll have some really great demonstrations at CES 2016! This is just the beginning of what RTG has been working on!