PUBG CPU Core Benchmarks – How Many Cores Do You Need

Last month, PLAYERUNKNOWNN’S BATTLEGROUNDS (PUBG) released a patch with optimizations that improved performance for those running a CPU with six or more CPU cores in their gaming rigs. PUBG uses Unreal Engine 4, which is capable of producing solid image quality, but can be rather taxing on your PC hardware. This Early Access game developed by Bluehole, Inc. has already sold over 11 million copies and recently passed up Dota 2’s record of 1.29 million concurrent players with over 1.34 million concurrent players last weekend. 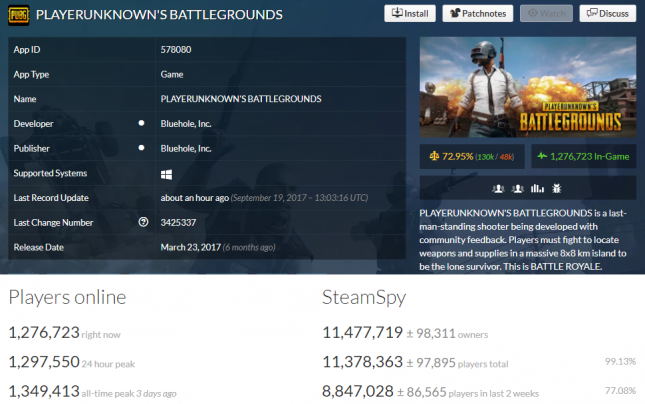 Those numbers are insane and that means there are nearly 11.5 million PC gamers out there looking for a chicken dinner. To get the best performance from PUBG you need a solid graphics card and processor. There are dozens of sites that have benchmark results for video cards, but when you look for CPU numbers there are just a handful. We were curious how many CPU cores you needed for PUBG and couldn’t find any results that showed benchmarks on the same processor with different core configurations.

So, we fired up our Intel X299 test platform with the Intel Core i9-7900X 10-core, 20-thread processor along with the NVIDIA GeForce GTX 1080 Ti Founders Edition graphics card to see how different core configurations would impact the framerate in PUBG. We ran the DDR4 memory at 3600MHz, but left all the other UEFI settings on our ASUS X299-Deluxe motherboard ($469.62 shipped) stock. We planed on testing 1-core, 2-core, 4-core, 6-core, 8-core and 10-core performance, but we got a memory error when trying to run PUBG with just a single-core. The minimum system requirements for PUBG show you need a dual-core processor, so this makes sense. Here’s what you need to run PUBG on your PC, according to developer Bluehole: 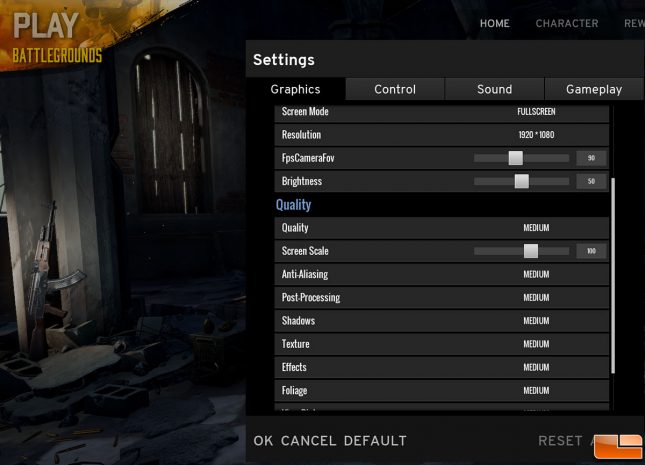 We set the image quality to the medium preset for testing on the NVIDIA GeForce GTX 1080 Ti (around $749 due to miners) and used FRAPS to benchmark PUBG. This is extremely tough as you have to benchmark with the same weather effect and spot in a game that can have up to 99 players at a time. It took some time, but we managed to get several runs in an outdoor environment on each setting with no people around. This area is a little easier than some, but it worked to show CPU differences. We averaged the results from the multiple at 1080P and 1440P display settings and charted the average frame rate below. 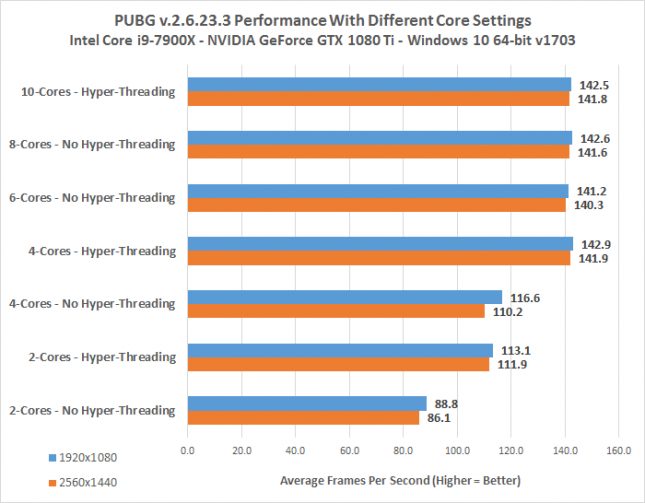 The Intel Core i9-7900X is a $962.89 shipped 10-core, 20-thread processor that is overkill for PUBG, but we used it and disabled active cores to simulate different core counts. In stock form we were getting around 143 FPS at 1920×1080 and 142 at 2560×1440. If we disabled Intel Hyper-Threading this remained the case at 8-cores and 6-cores, but once we hit 4-cores (quad-core) performance dropped down to 117 FPS at 1080P and 110 FPS at 1440P. If we went down to 2-cores (dual-core) the performance dropped down to 89 FPS at 1080P and 86 FPS at 1440P. Enabling Intel Hyper-Threading technology on the dual-core processor got performance roughly on par with a true quad-core part and the quad-core part with Intel Hyper-Threading was right there with the 6-core and above parts. So, to get the most from PUBG with a GeForce GTX 1080 Ti you’ll want to be running a true quad-core processor with threading enabled. 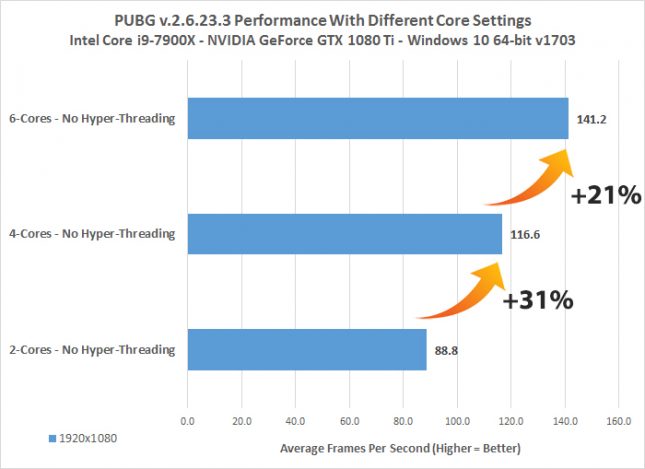 This chart uses the same data as the previous one, but better illustrates the difference between a dual-core, quad-core and hex-core processors. We saw around a 31% performance jump by going from 2-cores to 4-cores and then another 21% performance jump going from 4-cores to 6-cores. These are solid results and useful to know. If you are gaming on an older platform that uses a dual-core processor with or without Hyper-Threading or a quad-core processor without Hyper-Threading this might give you an excuse to upgrade. Intel 8th Gen Core processors (Coffee Lake) come out next month and will bring six-core desktop CPUs into the mainstream for both the Core i5 and Core i7 series. AMD already has 6-core or more parts in the Ryzen 5 and Ryzen 7 series series, so both AMD and Intel are ready for 6-cores to become the norm.

If you found this article interesting and want us to run more PUBG benchmarks please let us know what you’d like to see in the comment section below. Hopefully you found these CPU core results interesting as we surely did!