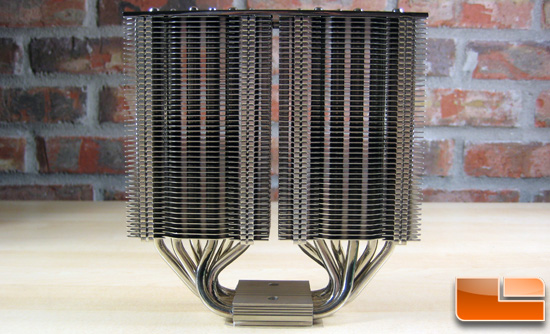 From the front it is hard to see how the heatsink may be different from the Megahalem. A telling sign though is the arrangement of heatpipes exiting the base. The heatpipes contort into a uniform line that penetrates the aluminum fins.

Prolimatech includes all the mounting hardware required to install the cooler on Intel socket 775, 1156, and 1366 platforms. If you are an AMD fan you will find that the Prolimatech Armageddon CPU Cooler supports AMD AM2/AM2+/AM3 sockets, but needs an optional mounting kit that costs another $9 USD. The Prolimatech Armageddon CPU Cooler also doesn’t come with any fans, but is compatible with both 120mm x 25mm and 140mm x 25mm fans. You’ll want to go with 140mm fans if you have to buy new ones as they will push more air, be quieter and help cool more of the Armageddons surface area. For testing today we will be using a pair of Xigmatek XLF-F1453 140mm fans to get the job done. These fans are rated at 63.5 CFM and a noise level of under 16 dBA, which is very nice.  The Xigmatek XFL-F1453 cooling fans run $12.99 plus $2.99 shipping each at Newegg. This puts our our Prolimatech Armageddon CPU cooler at $99.95 for the Intel platform. For the $100 price range you are getting up there for air cooling as you can get closed loop liquid coolers like the Corsair Hydro H50 for under $80 shipped, so let’s take a closer look at this cooler before jumping into installation and testing. 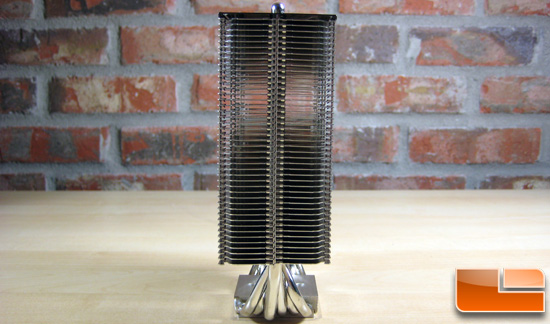 From the side you get a good idea of precisely how thin the Armageddon is. For those curious the dimensions are (L)144mm X (W)50mmX (H)160.3mm. The fins are just barely wider than the base making for a very thin profile.

The base of the Armageddon is formed of two pieces of copper that are clamped together with solder flowed between them to form a thermal connection to the heatpipes. The two holes in the top of the base are used with the mounting mechanism to center the heatsink over the processor. 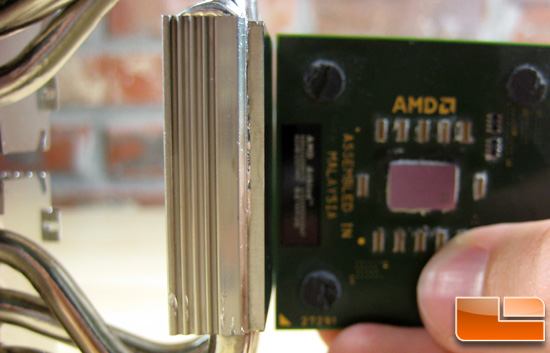 The base of the Armageddon is purposely machined to be slightly convex. You can see above against the relatively flat edge of my ancient Athlon XP that the top and bottom of the PCB do not make contact with the base. The reason for this is that a lot of CPU IHS are slightly concave or flat. With a convex base the mounting pressure of the mounting mechanism will press the center of the base against the area directly over the core of the CPU. Prolimatech advises against sanding the base and states this will void the warranty. The only instance lapping the base will be certainly useful is if you have also lapped the CPU IHS flat.