Intel launched the 2.8GHz, 3.0GHz, 3.2GHz, and 3.4GHz Prescotts back on February 1st, 2004 but due to allocation issues the 3.4GHz Prescott didn’t make it to store shelves as quickly as Intel had planned. It seems that Intel has enough on hand now to safely market the chips and has thrown the latest and greatest Prescott to the mercy of the media. While the Prescott is something very recent that Intel has come out with it should be fairly common to our readers. We have already written four articles looking at the Prescott ranging from performance to cooling issues so if you have not looked at them it is highly recommended that you take a look at them. We will not go into great detail on the Prescott today as the 3.4GHz Prescott is just a 200MHz clock speed increase for the processor.

With the processors flipped over we can notice some changes in design over time, but the 3.2E and 3.4E have identical undersides.

CPU-Z shots of the 3.4GHz Prescott in action: 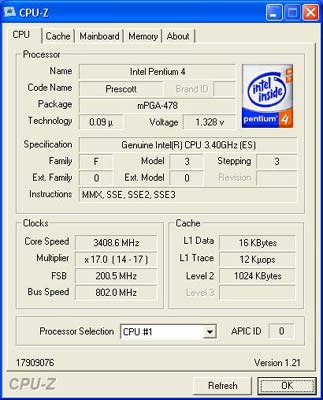 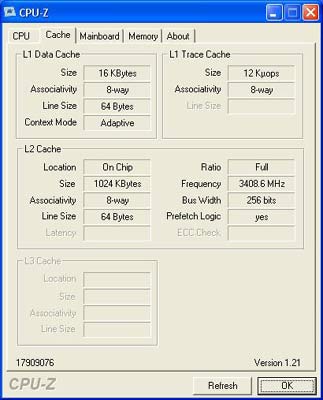 Everything looks good when viewing the processor under CPU-Z version 1.21! Looks like a standard Prescott with a little speed boost. It’s also nice to point out that the BIOS on our ABIT board noted the CPU Voltage as 1.375V, which is the same as the 3.2GHz Prescott. This is a good thing as temperatures shouldn’t be impacted in a large way with the increase in core speed alone.

Now that you know what processor we are looking at and how this is just a basic speed increase let’s take a look at some real numbers!