Just hours before the kick off of Super Bowl XXXVIII in Texas we have Intel kicking off the new Pentium 4 Prescott processors and the latest Pentium 4 Extreme Edition processor clocked at 3.4GHz. The long awaited Prescott comes with some major core changes: 1 MB L2 cache, 16 KB L1 data cache, SSE3, and built on the 90-nm process. With the launch comes four versions of the Prescott (2.8E / 3.0E / 3.2E / 3.4E GHz) with a low-cost Prescott version at 2.8GHz and 533MHz FSB speed that comes without HyperThreading. The 3.4GHz Extreme Edition also is out now and it will also be included in our review. 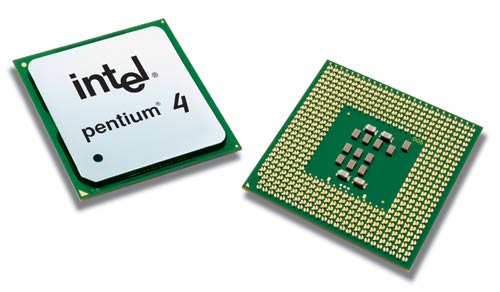 The first thing that should be understood with the Prescott is that the Netburst’s main branch prediction/recovery pipeline has been lengthened from 20 stages in the Northwood to 31 stages in Prescott. If you’ve been an enthusiast or in the IT industry for some time,then you know that this has been done before and at an initial performance loss. Intel went from 10 stages in the Pentium III to 20 stages in the original Pentium IV’s and the result was a performance decrease. As you will soon see, some applications do take a performance hit due to the change, but the increase in stages will allow Intel to ramp up to higher clock speeds thanks to the new design. Intel has confirmed that we will have “4GHz in 04”, but it’s rumored and has been seen on documents that the Prescott design will get up to ~5GHz before it hits the ceiling. 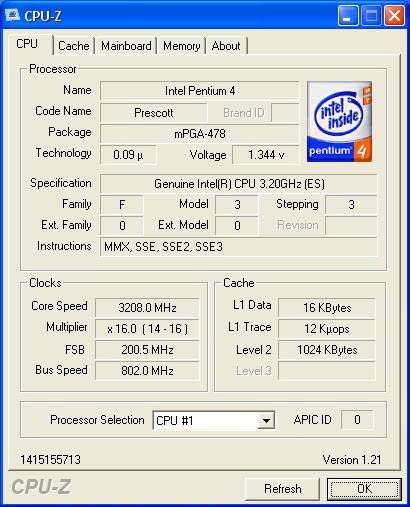 The Northwood’s have 512 KB, but as the above CPU-Z image shows the Prescott has 1 MB of L2 cache. The die size dropped from 127 to 125 (mm2), but has 125 million transistors compared to Northwood’s 55 million transistors. At 3.4GHz, Prescott has a maximum cache bandwidth of an impressive 108 GB per second. Additionally, Intel doubled the L1 data cache from 8 KB to 16 KB.

Intel has added 13 new processor instructions to help make life easier for software programmers and has called them SSE3.

At the current time not many applications take advantage of SSE3, but in due time the advantages may very well be seen. Think of this as an investment in the future and as applications begin to use the new instructions we will see what impact they have on overall system performance.