We took a look at some PMI Turbo memory a number of months ago and found it to be some great performing memory for its price point on the market. Since we posted that review, PMI merged with PQI and now PQI is handling the high performance memory line. However, PQI still uses the same high quality memory modules as the ones PMI used in the past.

“The acquisition of PMI, a leading manufacture of computer memory modules, further strengthens goal to be a complete memory solution provider in the convergence of computing and digital entertainment. We are committed to maintaining our industry leading position through leading-edge technologies, continued product innovations and the assurance of total customer satisfaction. The merge of PMI to PQI was to strengthen the product lines we have to offer to consumers, it was a coincidence that the launch of the PMI Turbo memory was around the same time that the merge occurred. PQI has incorporated the same high standard that PMI had in making high end computer memory (ICs, sorting, quality control… etc).”

So as you can tell PMI and PQI are now one and the same. PQI did make some serious cosmetic changes to their Turbo modules to make them stand out a bit more. The new PQI Turbo Series Memory has a new package, sticker, and heat spreader. These changes will not have a direct impact on the performance of the modules, but it does give them a new look. The heat spreader is actually different from the ones we see Corsair, Kingston, and OCZ using. It gives the modules a contemporary art feel with the smooth rounded center clip. If there is such a thing as building a Fong Shui computer then these would be the modules for you.

The first thing that we noticed with the 512mb modules was that they were double-sided memory modules (containing DDR SDRAM devices on both sides). We have shown in the past that single-sided DDR modules are slower than double-sided DDR modules. Below we show what the modules look like in their entirety with the heat spreaders removed. What was interesting is once we removed the new “PQI” heat spreader we found “old” PMI product labels on the memory. 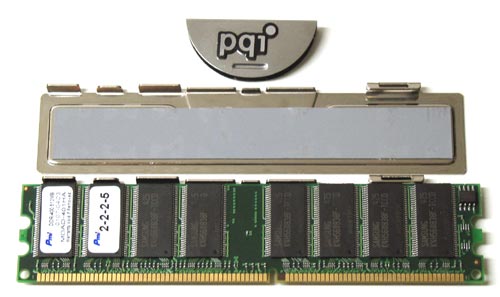 All PQI memory products carry a lifetime warranty. That means their modules are guaranteed to operate for the life of the product, as specified by their datasheet under the operating environment for which they were intended. This lifetime warranty applies to parts that were purchased from PQI-authorized resellers, or were supplied by PQI directly. Authorized resellers are resellers who are listed on PQIs web site at the time of module purchase.

The following parts are not covered by PQIs warranty:

So for the most part as long as you don’t lose the labels or sell your modules they are covered for life. Many of our readers have asked where they would have to send their modules for warranty repair if something happened and we asked PQI Memory about this. They stated that all memory modules RMAd in America would be sent to their California office and NOT overseas. Not bad on a high performance part that you know will be pushed to the limits by many users.

Lets take a look and see what is under the heat spreader on these modules.