Porsche Performance Cayenne Is Now The Fastest SUV Around The Nrburgring

Porsche is gearing up to launch a new model of its popular Cayenne SUV called the Performance Cayenne. Recently, it took the Performance Cayenne to the iconic Nrburgring Nordschleife to attempt to grab the record in the SUV, off-road vehicle, van, pickup category. Porsche was successful in its endeavor putting in a lap time of 7:38.925.

The driver behind the wheel was Lars Kern, and his lap spanned the entire 20.832 kilometers of the racing track. He says, “Over the first few metres of the Nordschleife in this Cayenne, you’re tempted to turn around to make sure that you’re really sitting in a spacious SUV. Its high steering precision and stoically stable rear axle gave me a lot of confidence in the Hatzenbach section.” 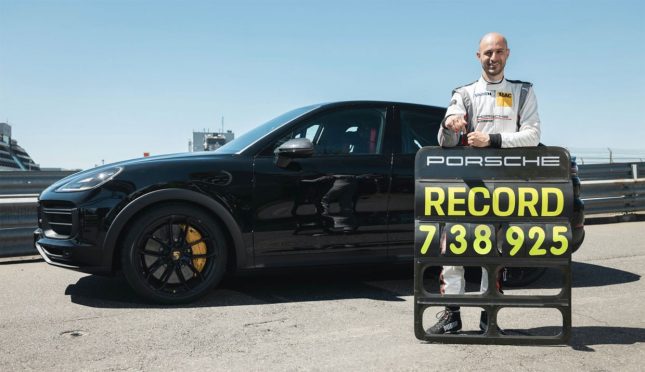 Kern also noted that the SUV didn’t lift tires in sections where that typically happens in other vehicles. He credits the wheel travel for keeping the car planted. The lap setting record happened on June 14, 2021.

At the time, the ambient temperature was 23 degrees Celsius with a track temperature of 46 degrees Celsius. The Performance Cayenne hasn’t been released yet, but Porsche says the only changes from the stock vehicle were the addition of a roll cage and racing seat. The SUV also used the 22-inch tires specifically developed for the model and designed for street use.