Cryptocurrencies have thrived in recent years and the success of Bitcoin and Ethereum have become household names. Their rise in popularity has helped spur the development of hundreds of other cryptocurrencies. There are also millions of people looking for the next big cryptocurrency to arrive. Well, Bram Cohen who is best known as the author behind he peer-to-peer BitTorrent protocol has created Chia. The Chia Network uses a Proof of Space and Time model (PoST) instead of the Proof of Work (PoW) model.

Proof of Space and Time model is a cryptographic technique that takes up storage space on either SSDs and Hard Drives. To get in on the fun you need to download the Chia Network Blockchain and then use your PC to create cryptographic numbers organized into “plots” on the system. These plots are created the fastest with SSDs and then can be moved to larger less expensive hard drives where the the plots can be ‘farmed’ to validate transactions on the Chia network.

Having a fast PC with high-end SSDs will allow you to plot faster as the creating plots takes many hours on an SSD. The ‘k32’ plot size that is recommended by developers is expected to last for nearly a decade. So, once plotted the files can be moved to hard drives for long term storage. This is a big difference from other cryptos that require high-end GPUs using exorbitant amounts of electricity to mine.

What is in it you you? If your ‘farmer’ has a ‘plot’ that gets scanned with the right hash you’ll win farming rewards. If you are a lucky winner you’ll get 2 XCH ‘Chia Coin’ for your contribution to this blockchain project. There are 4,608 chances per day to win and each winner gets 2 coins. We aren’t sure what that means in terms of cold hard cash though as the Chia mainnet just launched with farming rewards on Friday March 19, 2021. The first public XCH transactions will be enabled on May 3, 2021 and the monetary of an XCH will be determined at a that time.

A website called Chia Calculator shows you how much money you can expect off the number of plots that you have. The estimated earnings with the calculator use $20 USD per XCH, but that is entirely speculative. No one knows what the price will be and we won’t for nearly two more weeks.

That has not stopped miners as they’ve been buying up super fast SSDs for plotting and large hard drives for farming. There has already been a spike in hard drive and SSD sales and it is reported that there is a shortage of both already in China. 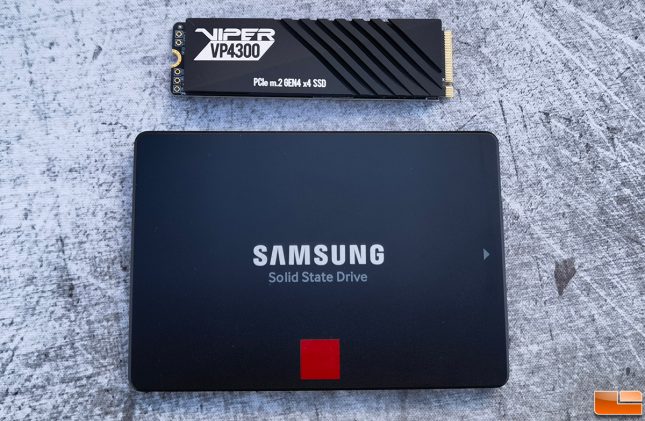 What type of drive do you need for plotting? We’ll help answer that for you today by showing you the k32 plotting performance of the Samsung 860 PRO 2TB versus the Patriot Viper VP4300 2TB. 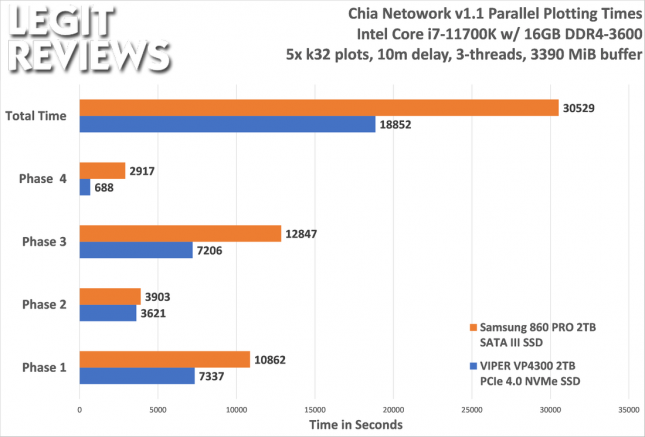 You want to get the plots online as fast a possible for a change to win XCH by farming. Time is money! 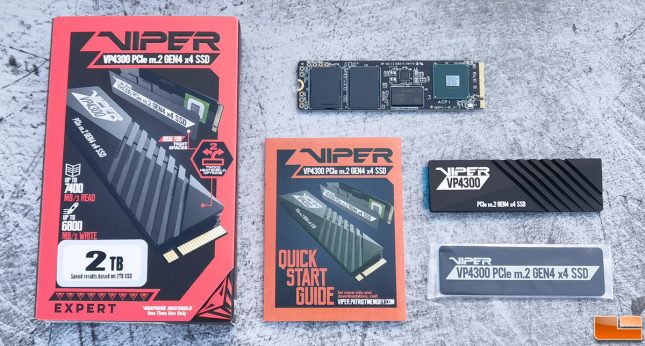 The TBW rating on the 2TB Patriot Viper VP4300 is 2,000 Terrabytes Written (TBW) and it is backed by a 5-year warranty. Each k32 ends up being 108.8 GB in size, but uses 356.5 GB of temporary space during plotting. Making a single k32 plot with bitfield mode enabled (default) requires 1.76 TB of data to be written to the plotting drive. That is a fair bit of data and something to know about. You will end up putting a ton of wear on an SSD creating plots!

With it’s 2000 TBW endurance rating, the Patriot Viper VP4300 can create 1,136 k32 plots before that endurance rating is exceeded. Once you are past that point the drives warranty is over and who knows how much longer it will last. Still, that means you can fill over 120 TB of hard drive space with plots created by one of these drives! That sounds like a lot of space, but it you are making 20 plots per day that will use up all this endurance in just 24 days. It is highly likely that some SSD makers will be updating the working in their warranty details if Chia continues to take off!

Having a large 2TB NVMe SSD to plot on also allows you to plot up to over half a dozen plots at a time in parallel plotting if you space them our properly. It also gives you a high endurance rating that will allow you to create more plots before the drive wears out. The Patriot Viper VP4300 2TB SSD runs $449.99 over at Newegg and Amazon.

You’ll want to avoid SSDs that use QLC NAND Flash and stick the models that have TLC NAND Flash. Write endurance is critical for plotting and TLC based drives are superior for this and well worth the extra drive cost!