Each month subscribers to PlayStation Now get to look forward to new, free video games available for download. The March lineup of free games has been announced, and there are four for players to enjoy. Games are playable on-demand starting today and include World War Z, InFamous: Second Son, Ace Combat 7: Skies Unknown, and Superhot.

World War Z has players playing as a human banding together to fight zombie masses in story-driven campaigns set in the world of the movie. It’s playable online with up to four players, and player versus player versus zombies game modes are available. The game is available on PlayStation Now until September 6. 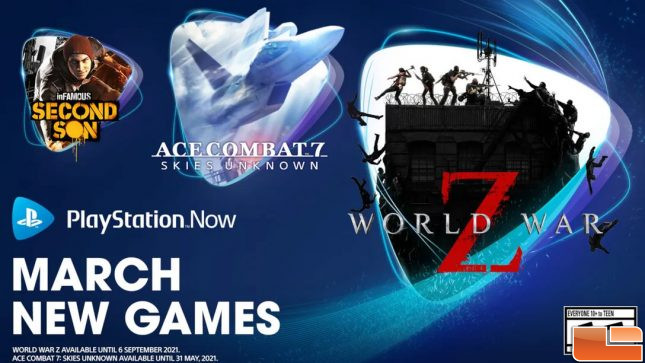 Ace Combat 7: Skies Unknown puts gamers in the cockpit of some impressive fighter aircraft for air-to-air combat action. There are some PS VR-compatible missions, and the game will be available on PlayStation Now until May 31.

InFamous Second Son puts players into the shoes of Delsin Rowe with superhuman powers. Players will be able to hijack powers from other superhumans, fly around Seattle, and see how their actions impact the city around them.

Superhot is an FPS where time in the game moves only when the player moves. Players are able to fight through slow-motion bullets to destroy the enemy.