Picking The Right Memory Kit For Intel Core i7 Platforms

Is More Memory Speed Worth It?

Last week when I wrote the article about Kingston’s 2GB 2000MHz HyperX triple-channel memory kit many had questions about how memory scales on the new Intel Core i7 platform and if going with faster memory is worth the extra cost. To help answer these questions I looked around at various e-tailors and took a look at what triple-channel memory kits are on the market. A quick search on Newegg under desktop memory shows that there are currently 17 different 3GB triple-channel kits to pick from ranging in price from $85.99 to $177.00. They also vary in clock frequency from 1066MHz to 1600MHz, which goes to show 1866MHz+ memory kits are not readily available in the market yet.  I contacted some companies as to why there aren’t more 1866MHz and 2000MHz kits on the market and was told that there is a supply shortage of memory ICs that are able to hit those clock frequencies at just 1.60V, which is the highest Voltage that Intel suggests running the memory at. 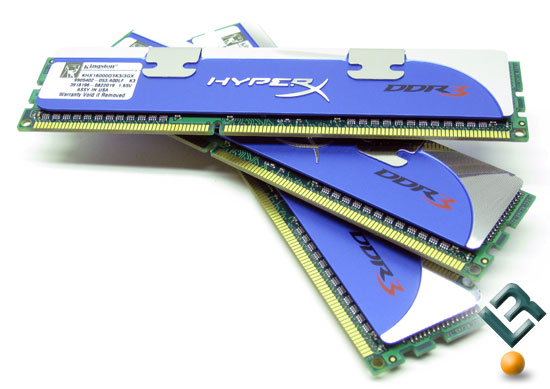 Looking at what memory kits are realistically available I picked what looked like the most common timings for each speed grade and benchmarked a kit of Kingston HyperX memory at those timings. Since the same kit of memory was used for all the testing it completely reduces the variance seen when using multiple kits of memory. The speed grades and timings that I used are listed below.

These four memory speeds are standard memory options on the Core i7 platform, so the clock frequency on the processor and the bus speed remained untouched. This is where things get a bit confusing as the Core i7 series of processors have something called the Uncore Clock Ratio (UCLK), which is the clock speed of the L3 cache and memory controller. One of the only ways you can figure out the L3 cache speed is to use CPU-Z, which lists the speed of the Core i7’s memory controller as the ‘NB frequency’ under the memory tab. To figure out the uncore clock speed you can just multiply the base clock (133MHz) by the Uncore Clock Multiplier (set in the bios) to get speed of the L3 cache and the memory controller.

When running an Intel Core i7 processor with 1066MHz or 1333MHz memory the L3 cache and memory controller operates at 2.67GHz as seen in the CPU-Z captures below. In fact I contacted Intel and asked about this and they said that 2.66GHz is the factory low for the Uncore Clock Speed. 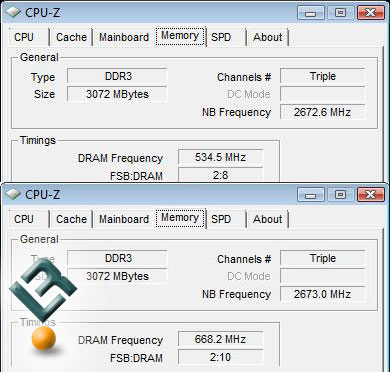 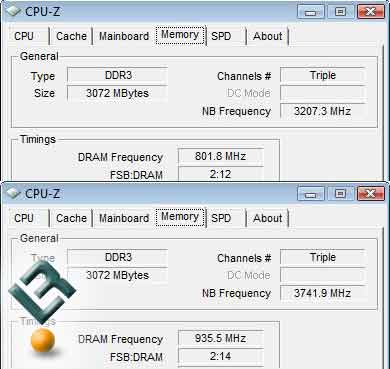 Let’s read on to see how the Intel Core i7 system performs with four different memory speeds.