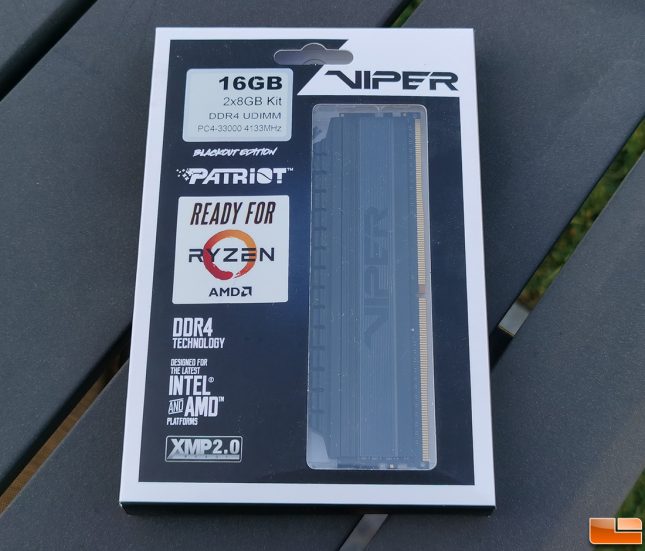 Right now 16GB memory kits are the most popular for gamers and what we would considered a must have for gaming PCs. 8GB memory kits just don’t offer enough memory here in 2020 for a solid build, so we’d recommend going with at least a 16GB memory kit! 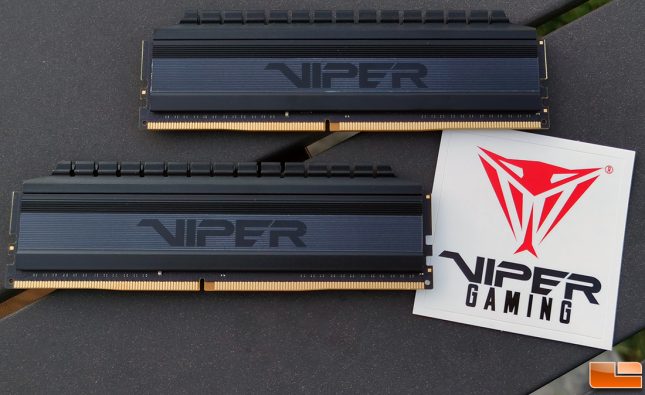 Inside the retail packaging you’ll find the two DDR4 memory modules and one Patriot Viper gaming sticker. Like the product name implies, the Blackout Edition modules are entirely black. You won’t find any RGB lighting here! Just a totally black heat spreader and matching black PCBs. Not everyone enjoys RGB lights and if you are in that camp the Blackout Edition should be getting bonus points right about now. 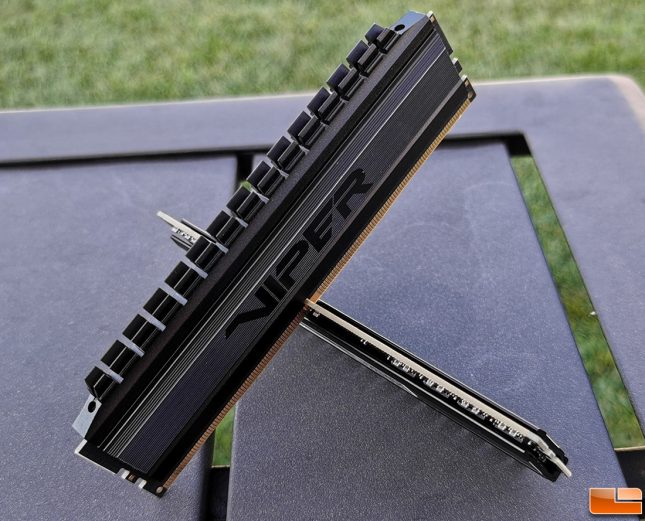 The Patriot Viper 4 Blackout Series features an aluminum heat spreader for faster heat dissipation and cooler operation. The overall height of these modules are 1.68″ or 42.6mm in height. That number is important for those that use aftermarket air coolers as space under the cooler might be a concern. Memory module height will not be an issue for most gamers and enthusiasts as it is a non-issue with AIO water cooling or DIY liquid coolers. 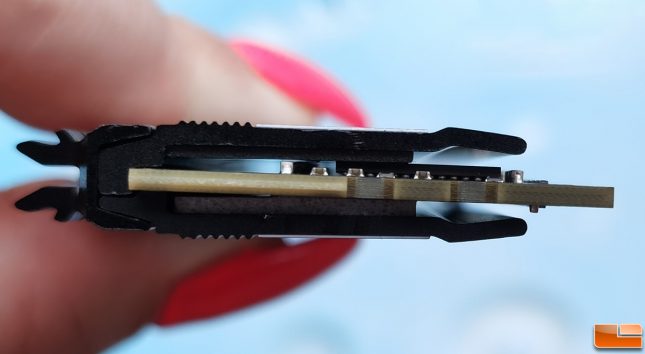 When it comes to the heat spreader design the Patriot Viper 4 Blackout Series has room for improvement. Sure the heat spreaders are visually appealing at first glance, but a quick look down the side of the modules shows memory IC does not make full contact with the thermal pad. In fact, we’d say that the thermal pad is making contact with at most 40% of each chip. We feel thermal performance should be the most important design concern for memory heat spreaders, but it seldom seems to be. 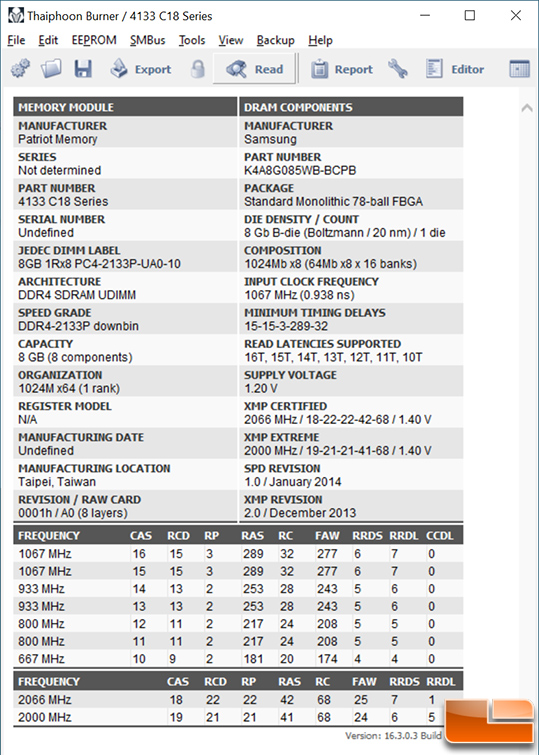 Running Taiphoon Burner software allows enthusiasts to gather all sorts of information about their memory kit. Patriot is using Samsung 8Gb B-Die (part number K4A8G085WB-BCPB) memory ICs on 8-layer A0 revision Printed Circuit Boards (PCB). The utility also shows that this is a single rank memory kit. Taiphoon Burner is a great piece of software that tells you all that you need to know about a memory kit without having to remove the heat spreader!

** Update 9/24/2020: Patriot Memory reached out and let us know that Viper 4 Blackout series memory only features Samsung B-Die chips on modules with DRAM speeds of 3866 MHz and higher. ** 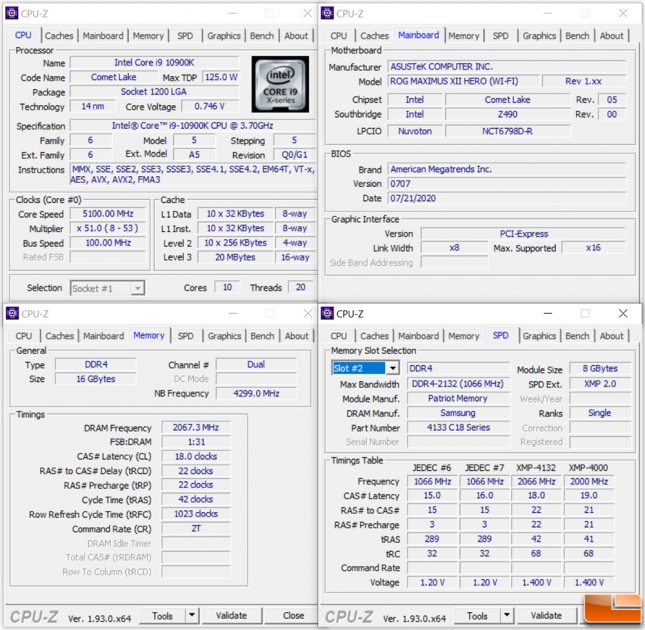 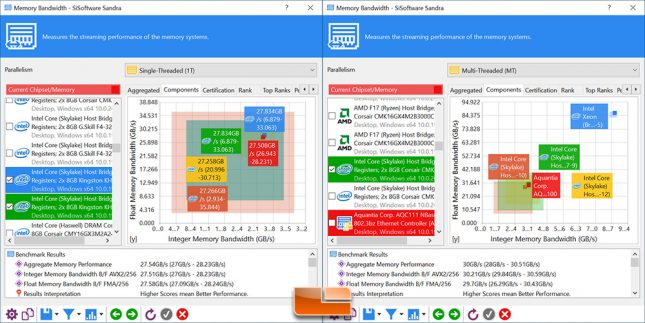 On our Intel Z490 platform that is running the Intel Core i9-10900K 10-core, 20-thread processor we first ran the memory bandwidth test in SiSoftware Sandara to see how the kit performs. We were able to get 27.54 GB/s of memory bandwidth on a single CPU thread and 30.0 GB/s using all available CPU threads at 4133MHz with the stock CL18 timings and 2T command rate.

This memory kit uses Samsung B-Die memory ICs and they are known to be inexpensive and can run at tighter timings if you are willing to manually adjust your memory settings. Good sets have been known to run at 3600MHz clock speeds with 14-14-14-28 1T timings! With our kit on our Intel Z490 test platform we were able to get down to 15-15-15-30 1T timings on the Patriot Viper 4 Blackout Edition memory kit with full stability. We could get to the desktop at 3600MHz with CL14 timings, but it was not fully stable. Running this 4133MHz CL18 memory kit at 3600MHz CL15 proved to deliver faster read and copy test results in AIDA64 and significantly lower latencies. 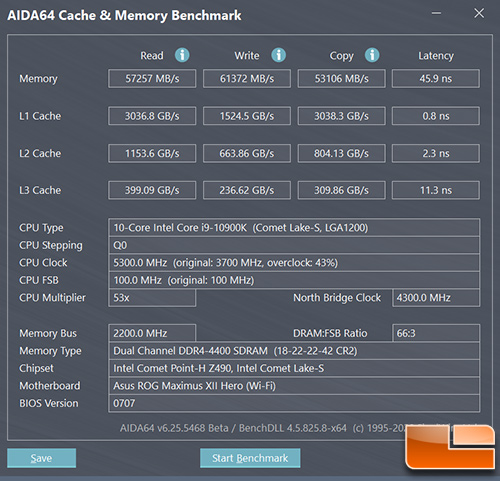 If you wanted to keep the timings at their CL18 default timings and push the clock frequency up you can also do that. We managed to hit DDR4-4400 speeds by doing this at the default voltage of 1.40V! 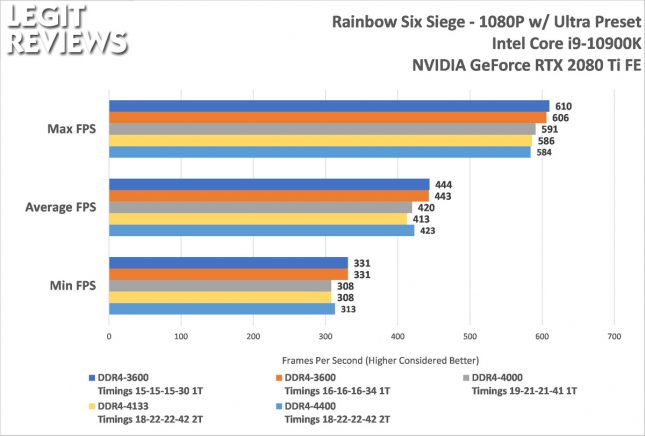 Using the built-in benchmark in Rainbow Six Siege we tested this 16GB kit of memory at its rated DDR4-4133 speeds and also its other DDR4-4000 profile speeds. By default the command rate is 2T, but we were able to get 1T stable at 4000MHz and enabled it for that speed. We also ran the benchmark at DDR4-3600 speeds with CL15 and CL16 timings to see if manually tightening the timings would be best for gaming performance. The test was run five times for each clock speed and then the averages were used to create the chart above.

The results clearly showed that if you are willing to manually change the UEFI settings in the BIOS that you’ll end up getting much better game performance. Our efforts led to a 7.5% improvement in the average frame rate and the minimum frame rate! Having a super high clock rate on the memory with loose timings usually does not perform better than moderate clock speeds with tight timings. This really applies to AMD where you can run the infinity fabric and DRAM at the same clock speed when running at DDR4-3600 speeds as the FCLK can be set to 1800MHz. We also ran this memory kit on our AMD X570 platform and was able to get DDR4-3600 speeds with CL16 timings without issue. We were also able to get this kit up to 4400MHz with CL18 timings, so it is a very versatile memory kit and fun to adjust. We’ve seen people run 1.5V on B-die, but we kept our testing to just 1.4V. 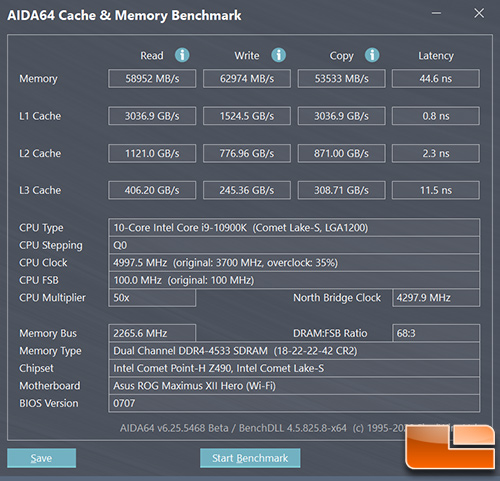 Okay, we might have bumped it up to 1.45V and managed to get 4533MHz stable! You can spend hours playing around with the clock speed, timings and voltages with this kit of memory!

The Patriot Viper 4 Blackout Edition 16GB (2 x 16GB) 4133MHz (PC4-33000) kit runs $124.99 and is a pretty slick memory kit. The XMP Memory Profiles worked great on our Intel Z490 platform, but would not work on our AMD X570 platform. AMD users will likely need to go into the UEFI and manually setup this memory kit. This is actually a good thing though as Samsung B Die memory ICs are fairly forgiving and you should be able to dial-in your kit for maximum performance. The heatsink on the Patriot Viper 4 Blackout Edition could have been designed better, but they are mainly for looks only.

If you don’t care about looks the Patriot Viper 4 Steel 16GB (2 x16GB) 4133MHz (PC4-33000) is currently available on Amazon for $89.99 shipped. It has different heat spreaders, but uses the same Samsung B Die memory chips. Both kits should be overclocking beasts and for under $90, you really get some amazing RAM for the price that you are paying.

All Patriot Viper 4 is backed by a lifetime warranty and will work on both Intel and AMD platforms if you are willing to manually set the clock speeds, voltage and timings in the UEFI/BIOS!

It is hard to beat the price and the flexibility of this kit is unreal, so this kit easily gets our recommended award.

Legit Bottom Line: Patriot Viper 4 memory with Samsung B Die memory ICs are super affordable and overclocking beasts if you have the time and desire to manually tweak them!