We don’t often review USB Flash Drives here at Legit Reviews, but we are making an exception for Patriot and the new Rage Pro USB 3.2 Gen 1 Flash Drive. The Supersonic series goes back at least a decade and there have been some pretty memorable models in the series over the years.

The Supersonic Rage Pro just came out this week and boasts some impressive specifications. This USB 3.2 Gen 1 drive is capable of reaching up to 420 MB/s sequential read speeds and up to 8,000 IOPS for 4K random write performance. If you haven’t updated your thumb drive in years, this release might make you want to upgrade. 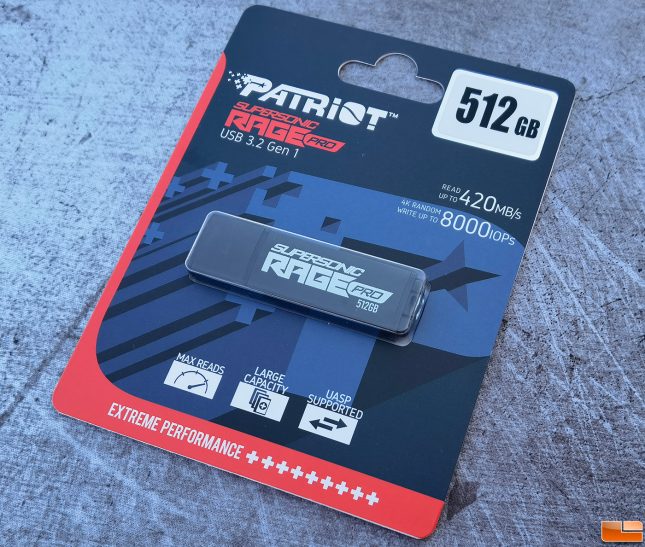 Patriot sent over the largest 512GB model for use to review. The part number on this drive is PEF512GRGPB32U. 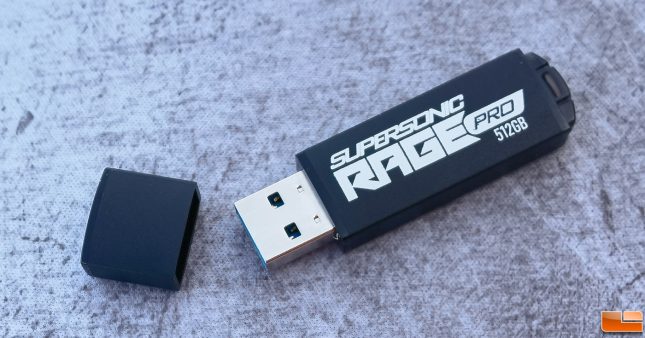 The Rage Pro is a tiny drive that measures 2.32″ x 0.83″ x 0.31″ with a weight of 11 grams. It has a solid aluminum housing and a removable cap. The cap does not store on the back of the drive, so you’ll have to keep an eye on it when you are using the drive. 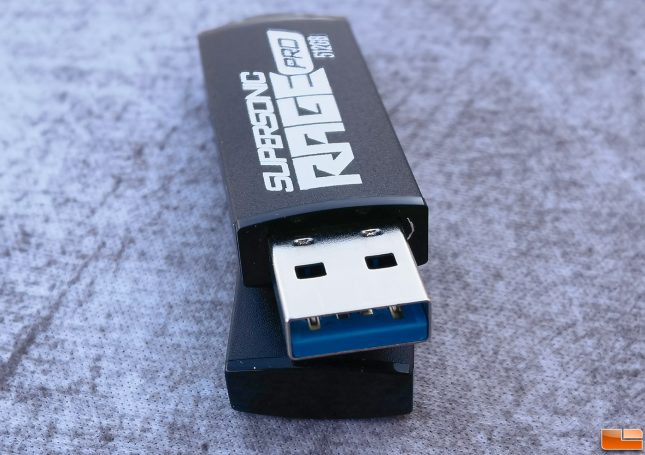 This is a plug and play device that requires no drivers for use. It is fully USB 3.2 Gen 1 compliant and backwards compatible for use with USB 2.0 ports at albeit lower speeds. USB Attached SCSI Protocol (UASP) mode is supported and needed to get the best performance from the drive. UASP is a native feature in Windows 10 and requires nothing of the end user.

On one side of the drive you have the Patriot logo and on the reverse is the model name and drive capacity. There is a hole for a lanyard on the end of the drive if you’d like to use one to help the flash drive from being lost. The end cap is semi-transparent as the drives red LED activity light is located behind it. 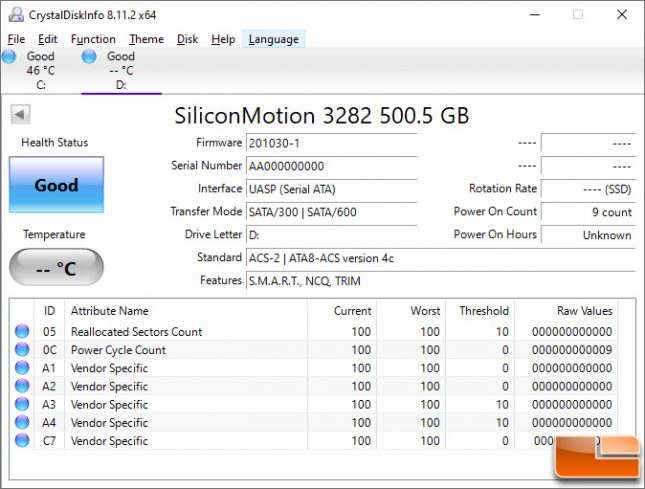 We didn’t open up the Supersonic Rage Pro to see what was being used inside because CrystalDiskInfo shows that it is using the SiliconMotion SM3282 single chip controller. The SM3282 was introduced in 2019 and supports the USB 3.2 Gen 1 interface. It features 2 NAND channels with 4 CE (Chip Enables) per channel. The controller is capable of speeds over 400 MB/s sequential read and write according to SiliconMotion.

To test out the Patriot Supersonic Rage Pro 512GB Flash Drive we plugged it unto the USB 3.2 Gen 1 port on Intel Z490 desktop test platform. This system is powered by an Intel Core i9-10900K processor on an ASUS ROG Maximus XII Hero Intel Z490 motherboard. 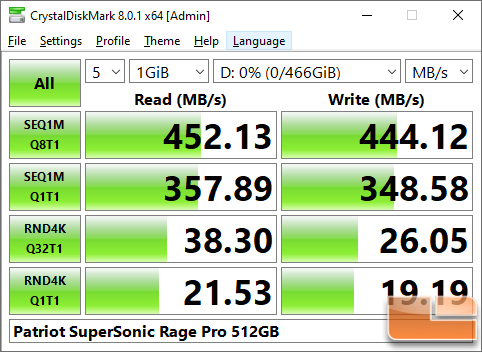 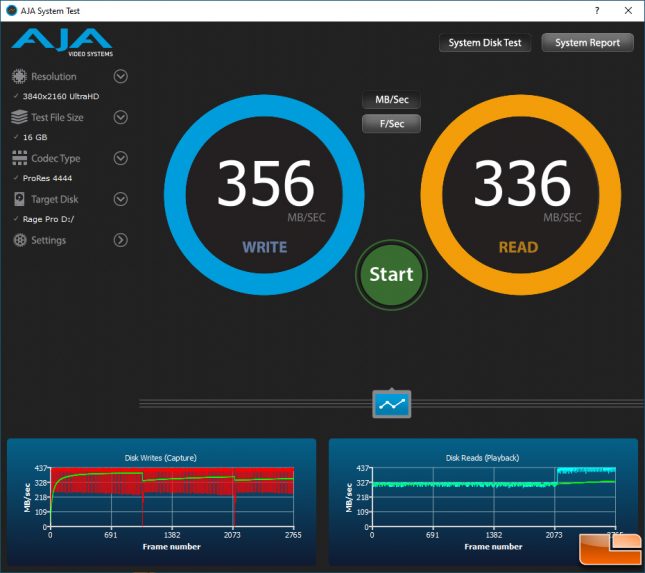 On the AJA Video Systems Test we used a 16GB test file size for 4K UltraHD and managed to get 336 MB/s read and 356 MB/s write speeds. In this benchmark the write test is done first and then the read test immediately starts. You can see the read speeds pick up at the very end of the benchmark as it appears the drive performance recovered likely due to garbage collection tasks being done. 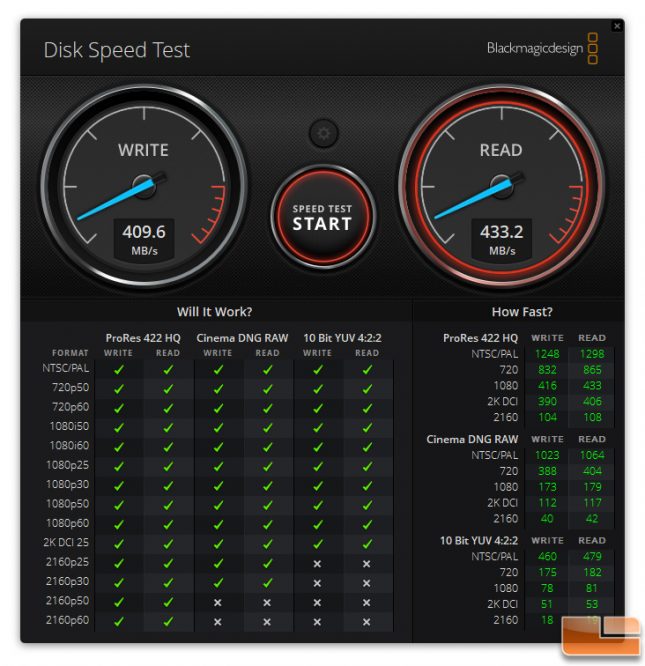 Disk Speed Test by Blackmagicdesign topped out at around 433 MB/s read and 410 MB/s write. The results showed all 1080p formats were supported and some, but not all 4K formats passed. 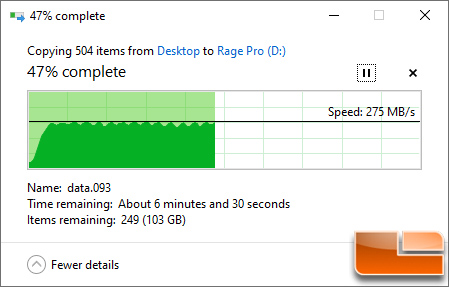 The last test that we did was to move the 200GB game directory for Call of Duty from our primary NVMe SSD over to the Supersonic Rage Pro USB drive. This file transfer was showing 220 MB/s to 280 MB/s speeds for the majority of the file write. 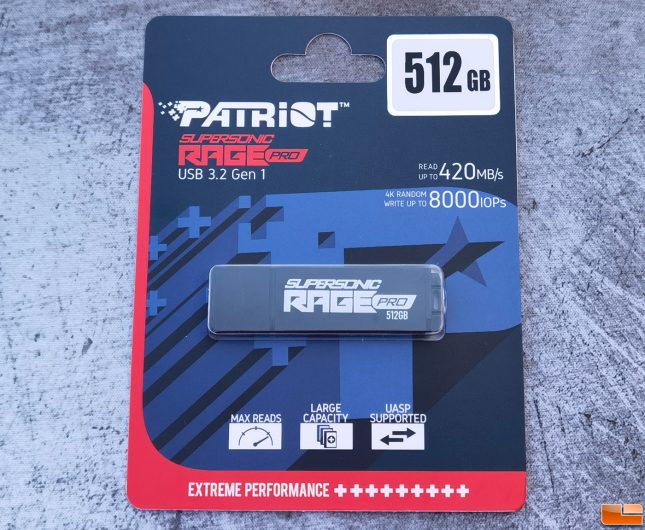 If you haven’t updated your USB Flash drive in a number of years you’ll likely be pleasantly surprised with speeds and pricing of the Patriot Supersonic Rage Pro series. We were able to exceed the drives 420 MB/s sequential read rating in CrystalDiskMark on our test system. Our top scores on that benchmark were 452 MB/s read and 444 MB/s write. Other benchmarks showed more realistic numbers, but they were still good. When we moved the 200GB folder to the Supersonic Rage Pro the we averaged around 220 MB/s to 280 MB/s. That is a solid result for moving such a large file to a thumb drive!

USB Flash drives might not be talked about or reviewed much these days, but they’ve gotten faster and less expensive in recent years. If you are looking for a new one we highly suggest giving the Patriot Supersonic Rage Pro USB Drive series a closer look. Maybe one of the capacities is available at the price point that you are willing to pay. The capacities available right now are 128GB ($28), 256GB ($50) and 512GB ($89). All can be purchased over at Amazon and are backed by a 5-year warranty.