Recently we purchased an Intel Pentium 4 3.2GHz Extreme Edition Processor from ZipZoomFly just to see how well it can overclock under normal conditions. By this we mean with all standard equipment that any of our readers can readily get from the open market (No ES CPU’s, hand picked parts, or voltage mods on the hardware). To help cool our test system we did choose to go with an easy to find watercooler, the Hydrocool 200EX and added active cooling to the northbridge of the ASUS P4C800E-Deluexe motherboard. The image below shows the system during testing. 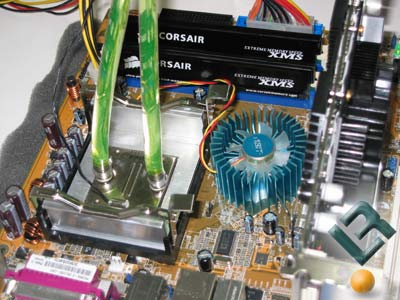 Right off the bat we ran the processor at default to make sure our processor wasn’t dead on arrival (DOA). Everything was fine and we then went on to find the maximum stable core speed that we could achieve with our processor running at 1.60Vcore. We quickly found that the limit with default voltage was a front side bus (FSB) of 225MHz giving a solid 3.6GHz core speed. Looks like we are off to a pretty good start with a 400MHz overclock on the default Vcore! The images below are the default and overclocked CPU-Z readings of our 3.2GHz Extreme Edition at the default Vcore.

The whole point of this article is to find how high we can get the processor so we began raising the Vcore to see how far we could push this chip.

We were shocked that after increasing the Vcore to 1.7V (.1 Volt increase) that it only gave us an 80MHz increase on the overall core speed. After we determined that 230MHz FSB was all we could get at 1.7Volts we again raised the voltage, but this time only a .025Volt increase was need to up the FSB. At this point we were 550Mhz over the default core speed, but still felt like this processor had more to give us.

We kept raising the FSB and Voltage to find the max of the CPU and found it to be at 1.775Vcore and 240MHz FSB. We took the Vcore up to 1.85V, but it still wouldn’t let us get into Windows XP Pro with any stability at any FSB setting over 240MHz. So we reached our retail processors limit at 3.84Ghz, which is a 641MHz overclock over the default settings.

To record the temperatures, we used the core temps found via ASUS Probe for our motherboard. ASUS boards tend to record temperatures on the low side, as we have shown in our core temperature article, so keep that in mind. For the idle temps, we let the system sit on the desktop for 60 minutes. For the load temps, we ran Prime95 and loops of 3dmark to stress the processor until the processor temperatures maxed out. The Hydrocool 200ex was set on turbo (higher fan speed) for all testing.

It is not everyday that you come across a person willing to buy one of the most expensive Intel processors and take it to the outer edge of its limits, but hey someone has to do it! Before i began overclocking this processor I honestly had no clue how far I would get since most the overclocked EE’s that I’ve seen on other sites or on the Futuremark hall of fame all happen to be ES chips that the public will never get their hands on. So even though this isn’t the fastest 3.2EE out there it was fun to get a 640MHz overclock. This is not too shabby for a randomly picked processor! For those of you that have used an EE processor before you know that it was very fast, just imagine it being 640MHz faster than before!

We hope you enjoyed our overclocking the 3.2 EE article and we hope to bring you more over the counter (OTC) product reviews in the future!