If you use the USB interface to move around files you’ll be hearing about USB 3.2 Gen 2×2 ports much more here in 2021. That is because Intel has integrated USB 3.2 Gen 2×2 into their upcoming 500 series chipset. This move means that SuperSpeed USB 20Gbps speeds will finally be possible on mainstream platforms! And who doesn’t want to transfer files to external drives at over 2 GB/s (2000 MB/s) speeds?

Up until now you needed to use high-end motherboards to get USB 3.2 Gen 2×2 (20Gbps) ports on a PC. The first enthusiast boards that supported it came out back in 2019 and were costly. Now you’ll end up seeing it on motherboards using Intel Z590, H570, and B560 chipsets. Intel H510 chipsets do not have integrated USB 3.2 Gen 2×2 support. This is great news for those looking to build or buy a new system, but what about those that aren’t? 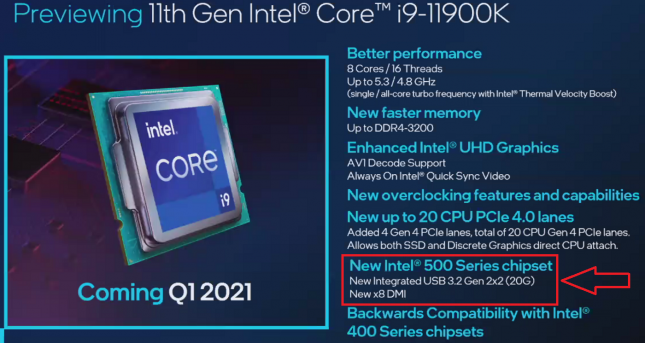 Enter the ORICO PE20-1C at $49.99 shipped (buy on Amazon)! This USB 3.2 Gen 2×2 internal expansion card pops into an open PCIe x4, x8 or x16 card slot on your existing motherboard. In doing so it adds one 20 Gbps USB Type C port to your system. No drivers are needed for this Add-In-Card (AIC) and the installation is about as easy as it comes! 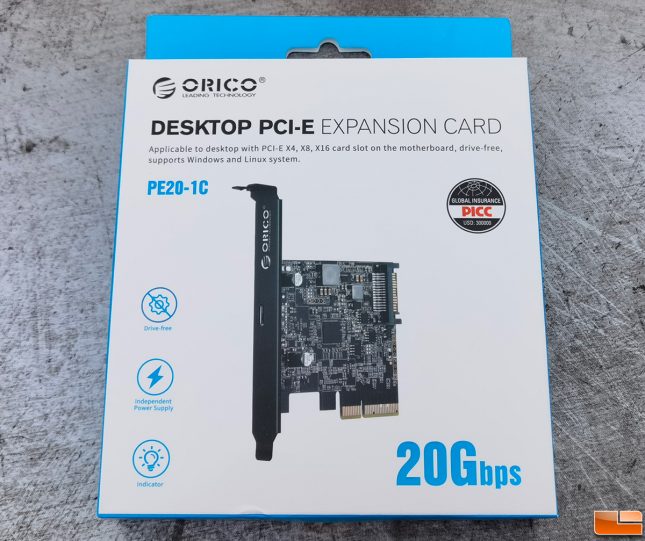 We asked ORICO if we could review this card and they happily provided a sample for us to take a look at. The ORICO PE20-1C Desktop PCIe Expansion Card was dropped off by Amazon and pulled from normal stock like the one you would purchase. 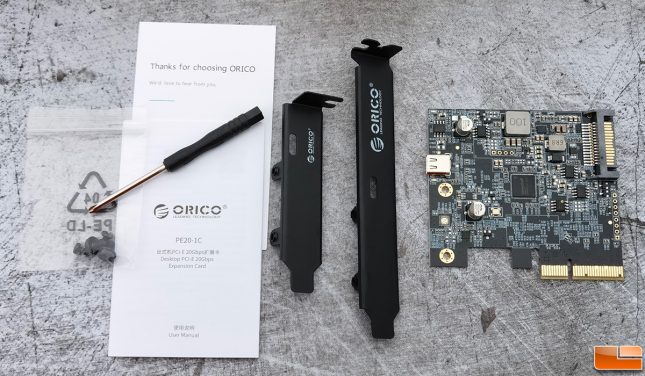 The ORICO USB 3.2 Gen 2×2 card comes with standard-profile and low-profile brackets in order for it to be installed in a variety of different PC form factors. It also comes with screws for the bracket and the PCI slot. The included instructions were basic, but enough to get the card installed. We like the blacked out appearance as it will go well in pretty much any gaming PC build.

What About Those Negative ORICO PE20-1C Online Reviews 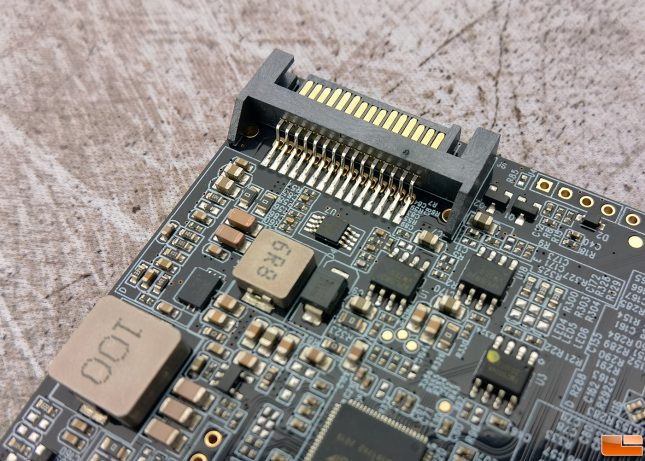 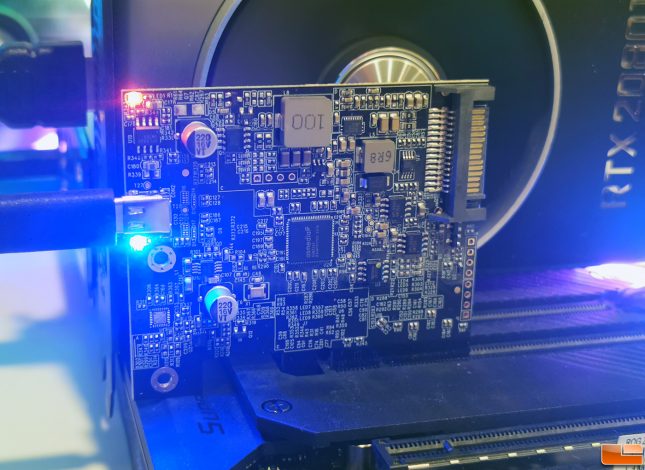 One thing that we noticed is that the 15-pin SATA power connector is optional. The instructions say that the card can be connected to an independent power supply to ensure normal operation. We ran it without power on a few portable SSDs and found that it ran fine. The red LED indicator light means that the device is powered up and the blue LED indicator shows that a USB device is connected. We ended up plugging in the power for testing after confirming that it isn’t needed for some use cases. 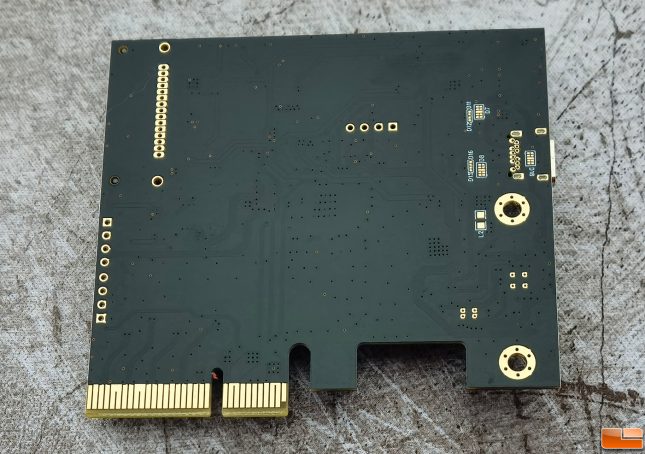 Installing the ORICO PE20-1C expansion card in most systems will be easy, but we ran into issues on motherboards that had ‘shields’ and covers. The PCI bracket included with the AIC has bent in edges and those hit the covers and the card will not seat properly into the PCIe slot. This is something that ORICO should address to improve compatibility. If you happen to run into this issue you can either cut off the tabs at the bottom of the bracket or grind them off with a file or bench grinder. This might only impact a small number of people, but it needs to be brought up and discussed. 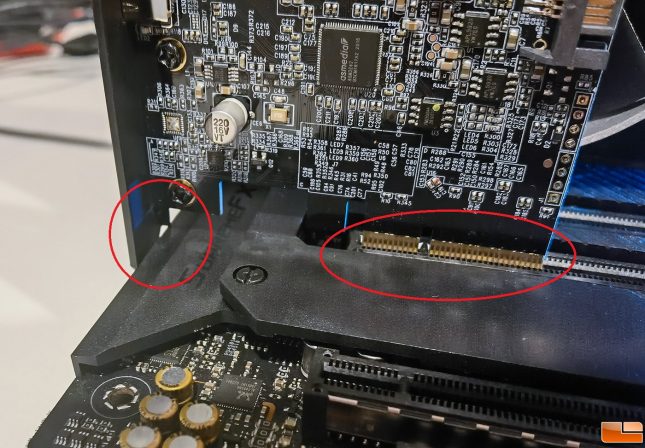 On the front of the card you can see the ASMedia ASM3242 host controller and this is what makes USB 3.2 Gen 2×2 (20Gbps) speeds possible. 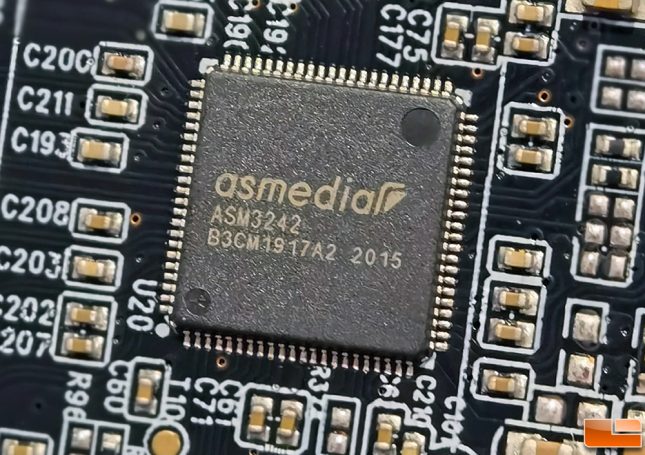 To test the performance of the ORICO PE20-1C expansion card we tried it out on an ASUS ROG Zenith II Extreme Alpha motherboard with an AMD Threadripper 3970X 32-core, 64-thread processor. This is by no means an average system, but we picked it because it already has USB 3.2 Gen 2×2 support included on the motherboard. Testing this way gives us the unique opportunity to compare performance of this low-cost $50 AIC versus a flagship motherboard that costs around $800.

A quick run of CrystalDiskMark showed that the ORICO PE20-1C 20 Gbps expansion card delivered slightly better performance than the solution in our halo motherboard platform. We expected it to be slightly lower or the same level of performance, so this was great to see. We are getting nearly 2100 MB/s read and write speeds on this expansion card with the WD_BLACK P50 Game Drive being used as the portable SSD.

Next up we ran AJA System Test and we were getting around 1.8 GB/s sequential read and 1.9 GB/s sequential write speeds. No significant difference was seen between the two USB 3.2 Gen 2×2 solutions. 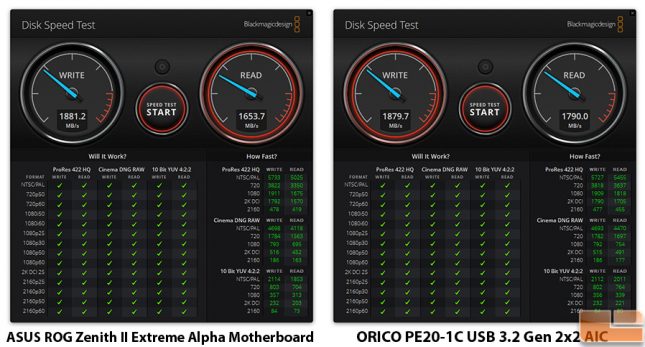 The final test that we ran was the Disk Speed Test by BlackMagicDesign and the scores looked good on both systems. The read speeds were about 150 MB/s different in favor of the ORICO AIC, but the sequential write speeds were spot on.

We could keep showing you all the benchmarks that we ran, but the results were all similar to the three that we have already shown. We can say with confidence that the ORICO PE20-1C 20 Gbps expansion card is just as good, if not better, than any built-in motherboard solution that is already on the market today. It should also be pointed out that we tried the AIC on boards that don’t offer any USB 3.2 Gen 2×2 slots and performance was just as good on their PCIe 3.0 slots. 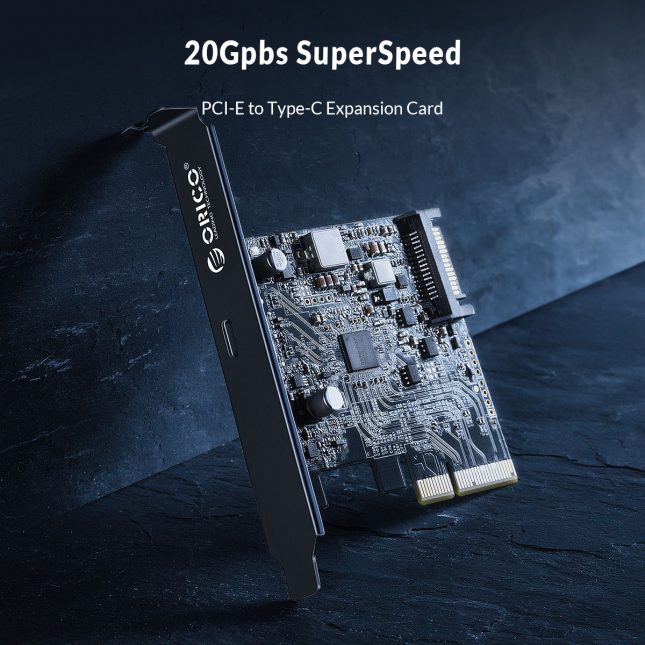 The ORICO PE20-1C USB 3.2 Gen 2×2 expansion card is a low-cost solution that adds a single 20Gbps port to desktop computers that don’t have one. The performance of the add-in card was exceptional and performed just like the one you can get in existing high-end motherboards!

That said a few minor details were overlooked by ORICO that could have made this product better. It would have been nice to see through-hole mounting used on the SATA power connector for increased strength and the PCI bracket is not stamped correctly. If ORICO orders in another batch of these we hope they make these minor tweaks to improve the product. Neither are deal breakers by any means, but they could have been entirely avoided.

This also happens to be the lowest priced USB 3.2 Gen 2×2 expansion card available on Amazon at $49.99 shipped. The Yottamaster USB3.2 Gen 2X2 Expansion Card appears to be exactly the same thing and runs $69.99 shipped at Amazon. It looks like they also have the PCI bracket stamped incorrectly, so ORICO and Yottamaster appear to be sourcing them from the same manufacturer and relabeling them. For $20 less the ORICO USB 3.2 Gen 2×2 expansion card (Part number PE20-1C) appears to be the best bang for the buck.

Despite running into a few minor issues we still recommend this expansion card. It is priced lower than the competition, delivers exceptional performance and the shortcomings can can be easily fixed or avoided by consumers if they know about them ahead of time. We like encountering issues as it keeps our readers around! Let’s see if ORICO goes back to the manufacture and makes any changes.