ORICO might not be the first brand name that you think of when it comes to storage, but they have been making computer peripheral products since 2009. For more than a decade, ORICO has been selling SSDs, portable SSDs, HDD enclosures, HDD docking stations, USB3.0 hubs, USB chargers and a ton of other products. The product that we will be looking at today is the ORICO GV100 Mini M.2 NVME Portable SSD (product page).

The GV100 houses an internal M.2 2242 NVMe SSD and is capable of delivering up to 940 MB/s read speed over its USB3.1 Gen2 Type-C output interface. That makes it one of the faster portable SSDs on the market today and is one of the reasons why we are taking a closer look at it today. 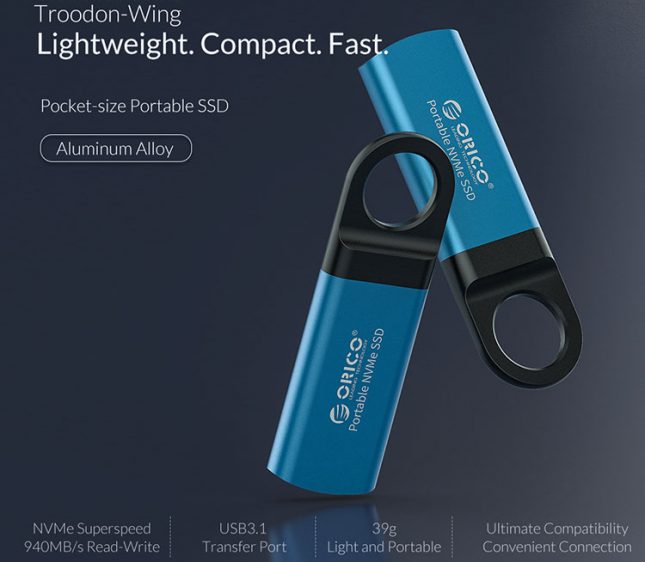 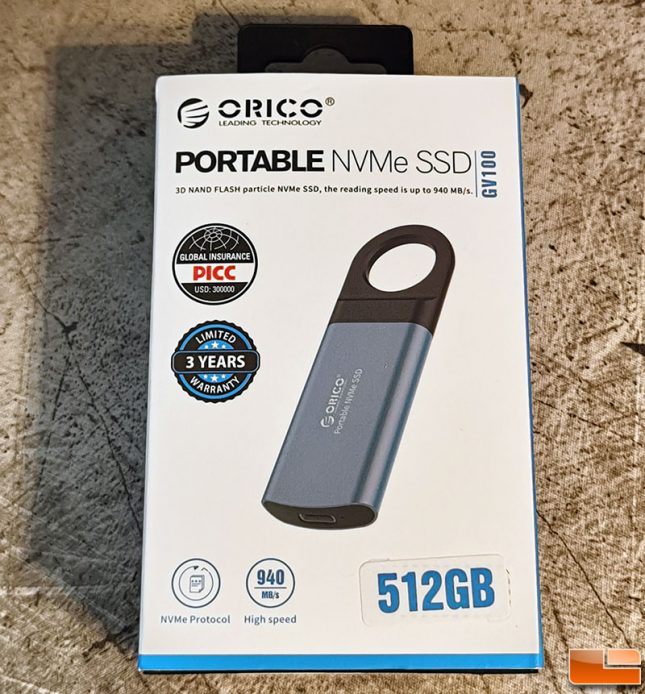 The exact model that we were sent out to review was the ORICO Troodon-Wing Series GV100 portable SSD that was 512GB in capacity. 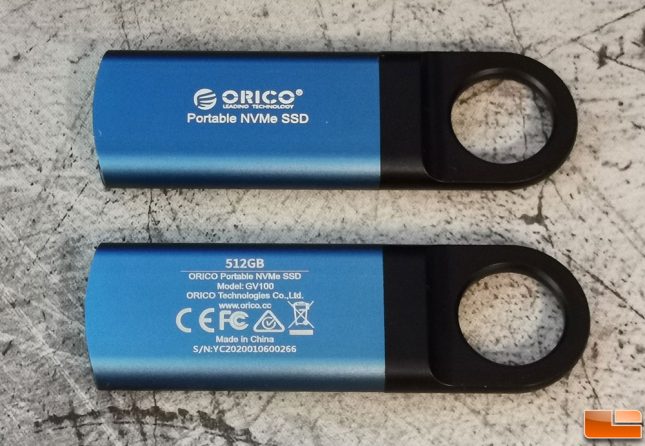 The ORICO portable NVMe SSD measures 96mm x 30mm x 9.9mm (LxWxH) and that makes it one of the smallest portable NVMe SSDs around. That is due to the fact that ORICO is using an M.2 2242 SSD inside that is just 42mm in length! The blue aluminum alloy body looks nice and there is an ABS plastic housing on the end with a hole in it. This hole is for you to attach it to you bag or lanyard to keep it from being lost. 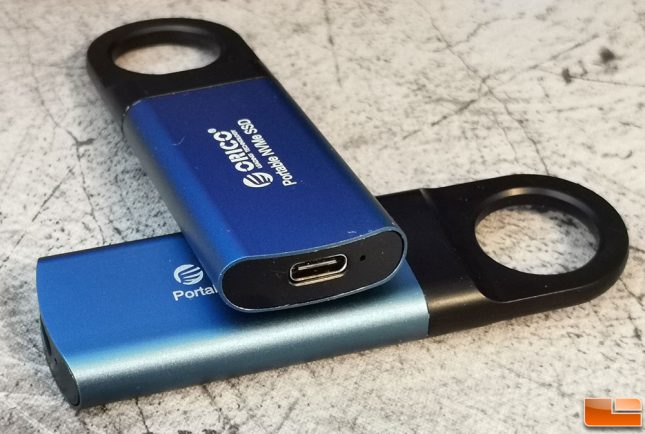 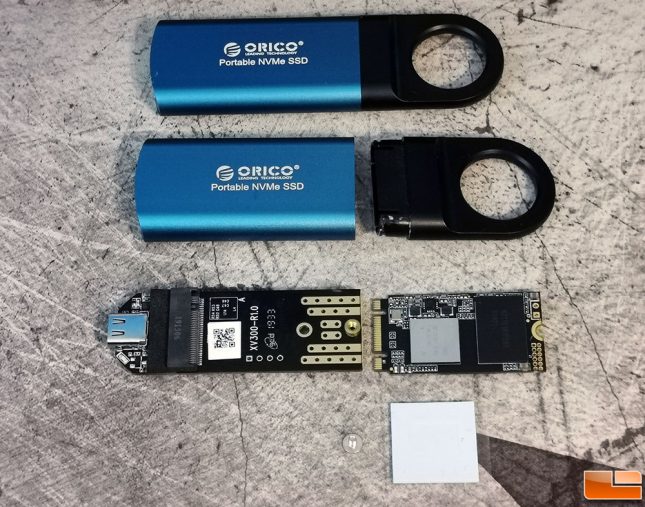 The ORICO GV100 came apart rather easily and the internal drive slides right out of the housing. The cap of the drive just snaps in and it looks like ORICO placed two drops of glue on the rounded part of the cap. Thermal pads were placed on the SSD controller and bridge controller located on the bottom of the board. 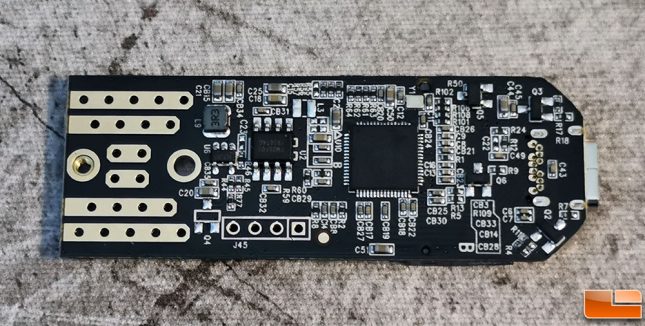 ORICO went with the JMicron JMS583 USB 3.1 Gen 2 to PCIe Gen3x2 bridge controller for the GV100 series. We are very familiar with this controller and it has been around since 2018. 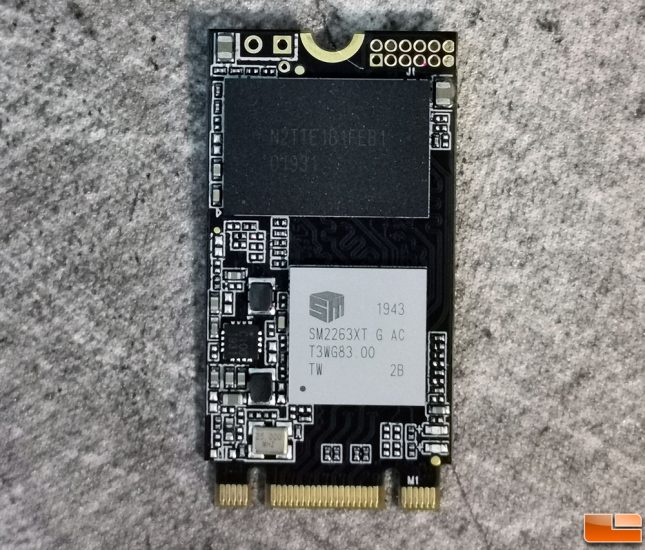 The tiny 512GB M.2 2242 PCIe NVMe SSD was a double-sided module powered by the Silicon Motion SM2263XT controller and 64-layer TLC NAND Flash memory. This is a DRAM-less SSD that uses host memory buffer (HMB) in Windows 10 to reach peak performance. The ORICO GV100 is backed by a 3-year warranty, but you can always swap out the M.2 2242 SSD with another if so desired. 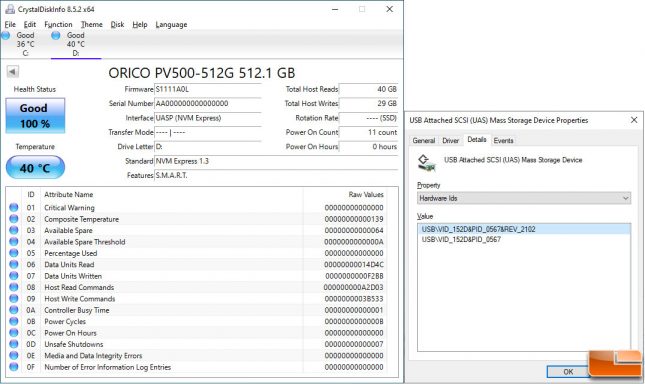 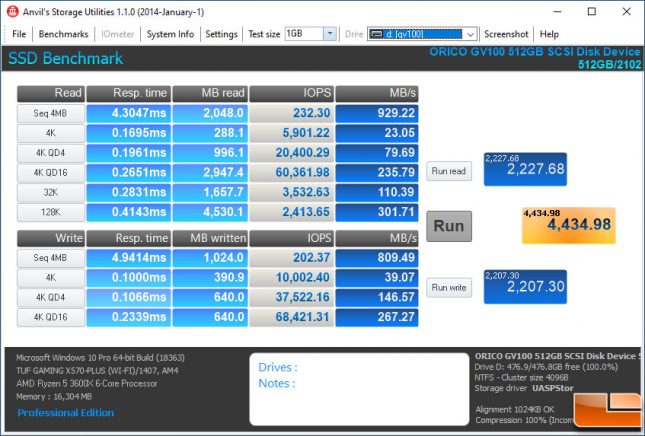 Switching over to results from Anvil’s Storage Utilities, we see that it topped out at 929 MB/s read and 809 MB/s write on the sequential SSD benchmarks. 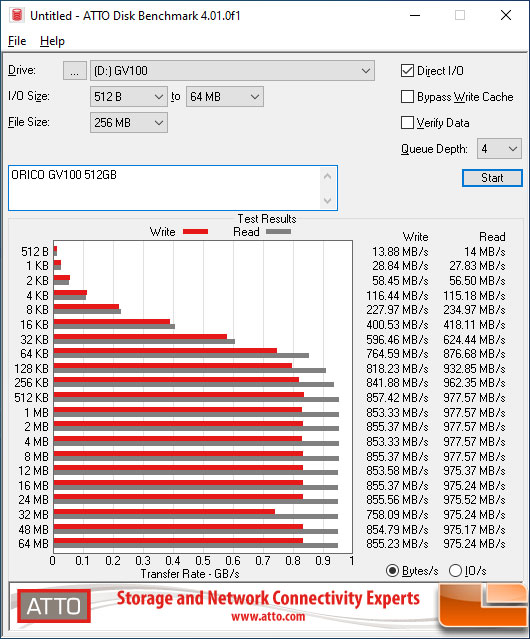 ATTO Disk Benchmark is one of the most widely used storage benchmarks and here we topped out at 977 MB/s read and 857 MB/s write on the ORICO GV100. This was done with a 256MB file size and a queue depth of 4. 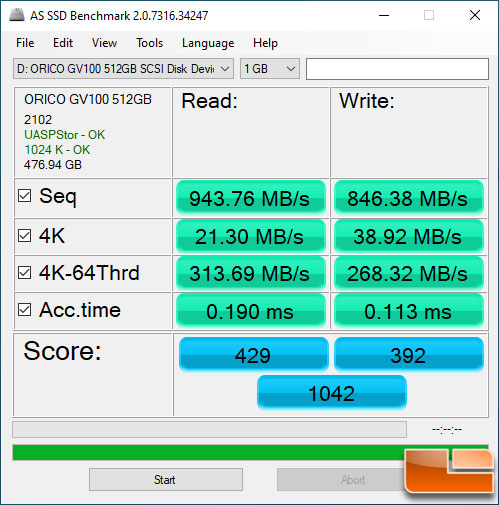 The last and final benchmark that we ran was AS SSD Benchmark and we managed to hit 943 MB/s read and 846 MB/s write.

While those benchmarks look great, the reality of the situation is that having a good user experience from the ORICO GV100 portable NVMe is going to be really hit or miss. This review took many weeks to complete due to running into major stability issues on both Intel and AMD platforms running Windows 10 Pro 64-bit version 1909. At first we thought it was a bad drive, so ORICO replaced the drive. We still ended up running into drive alignment issues and the fact that the drive flat out didn’t work on some USB 3.1 Gen 2 ports. We’d get all sorts of weird errors and sometimes the entire system would freeze up if the drive was just plugged in. 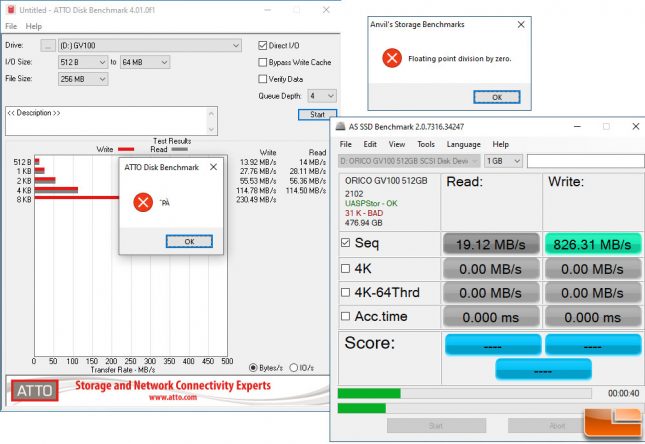 While trouble shooting the issue we ended up taking the M.2 NVMe drive out of the enclosure, removing it from the board and trying it inside other portable SSD enclosures. We noticed that all portable USB Drives that used the JMicron JMS583 USB 3.1 Gen 2 to PCIe Gen3x2 bridge controller were having issues. We switched over to an ASMedia ASM2362 based enclosure and has absolutely zero issues. The same was true for one using the Realtek 9210 controller solution.  ORICO sells DIY enclosures based on the RTL9210 controller, but unfortunately is not using that controller for the GV100 series. After getting a couple GV100 drives from ORICO, aligning drives with the DiskPart Utility in Windows and trying the drive on no less than half a dozen desktop PCs we were finally able to get the stellar benchmark numbers in this review.

The ORICO GV100 Portable NVMe SSD is impressive on paper, but faces some stability issues due to the use of the JMS583 bridge controller. It also faces tough competition from a number of other drives on the market. One of those drives would happen to be the Crucial X8 portable SSD that uses the ASMedia ASM2362 bridge controller that has far fewer stability issues. Not too many of the reviews on the ORICO GV100 talk about stability issues, but we conversed with some of our peers and they also received multiple drives and ran into stability issues. It seems others made the decision not to write about that, but both of our drives had issues and we can’t just ignore that. The issues seem to revolve around the JMicron controller, so we hope that ORICO brings another drive to market with a different brand or model controller in the near future.

When it comes to pricing the the ORICO GV100 512GB Portable NVMe SSD runs $149.99 shipped. You can find the Crucial X8 500GB portable SSD for $79.95 shipped. This makes the ORICO GV100 512GB drive $70 or nearly twice the price of competitors in this drive class. Both are NVMe drives that are backed by 3-year warranties.

At the end of the day the ORICO GV100 is priced sky high and has stability demons that make the user experience less than stellar.