Orbital Debris Tears A Hole In The ISS Robotic Arm

During a routine inspection, NASA discovered something chilling in the form of damage caused by orbital debris to the robotic Canadarm2 attached to the ISS. While orbital debris of many larger sizes is monitored, there are unknown numbers of smaller pieces of debris circling the earth at incredible velocities that pose a risk to the ISS and other satellites.

NASA says that ongoing analysis has indicated that the performance of the robotic arm remains unimpacted. Damage is limited to a small section of the boom of the arm and its thermal blanket. The image shared shows exactly where the damage occurred, but it’s unclear if the debris passed completely through the robotic arm or only left a hole in the heatshield. 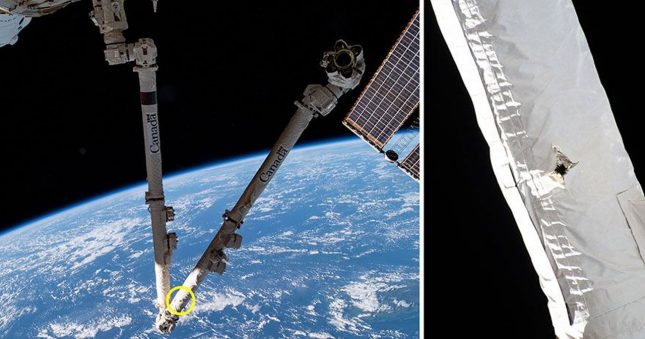 The robotic arm is an important piece of equipment aboard the space station as it’s used for all sorts of tasks. It’s soon scheduled to be used to move a Canadian robotic hand called Dextre into position to replace a faulty power switch box.

Mission controllers say that the arm’s performance and its pending task won’t be impacted by the damage sustained. It’s unclear at this time if the damage will require a spacewalk to repair or if it’s merely cosmetic.