In 2010 we first learned about the OnLive Game Service and how they were going to be one of the dominant companies in building the future of cloud computing. In late 2012 the company was acquired by Lauder Partners and a new company was formed called OnLive Inc. Over the years the Onlive Cloud Gaming service has been used by millions of users in the US and Europe, but that appears to be coming to an end on April 30th. It appears that Sony has stepped in and bought many of the assets that OnLive had in a deal that has not had the terms disclosed. Sony basically bought the 140 patents that made OnLive unique and will be using them for their PlayStation Now streaming service. Over offloading their most valuable patents to Sony it appears the California-based company will be shutting down.

“It is with great sadness that we must bring the OnLive Game Service to a close,” states a post on OnLive’s Facebook page. “Sony is acquiring important parts of OnLive, and their plans don’t include a continuation of the game service in its current form.” 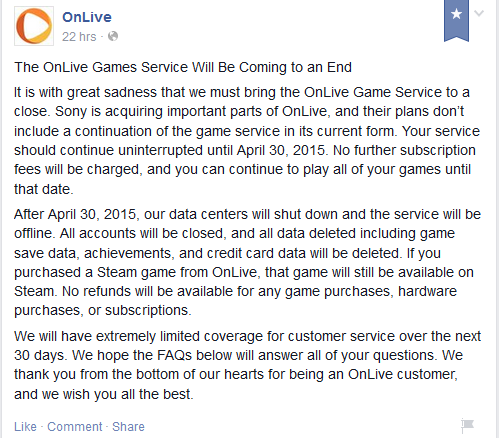 OnLive added that it would not be offering refunds for any game purchases, hardware purchases or subscriptions. If you read the fine print though there is a way to get a refund if you purchased an OnLive Game System, or OnLive Universal Wireless Controller on or after February 1, 2015. If you purchased hardware on or after February 1, 2015, your purchase has been refunded and an email was sent to notify you of this already.

That’s awesome! Nothing like finding out a company you are subscribed to is closing and you get nothing at the end of the day! Here is the OnLive FAQ if you are a customer and still have some questions.