Every once in awhile we kick off a review with a little historical background of the company and/or product to help put things in perspective for the reader. This may be met by some with a rolling of the eyes but nevertheless, we’re going to start this one off with a little bit about OCZ. There’s a reason for this so hang with us here. The vast majority of people reading this will probably remember OCZ as a company who primarily dealt in computer DRAM memory products for many years, eventually offering a smattering of other components and accessories like power supplies and flash drives. OCZ was quick to jump in and embrace the SSD market, being one of the pioneers in that arena which eventually led to them eschewing their other products to focus solely on SSDs. Legit Reviews has followed OCZ closely through all those years and provided coverage for a number of important milestones in their history.

OCZ has been rather aggressive with their product releases in the past, relying on speed to market to drive sales. While this really helped propel them as a leader in the industry, OCZ took a lot of flak from time to time about buggy firmware and frequent firmware updates to fix said bugs. Even so, through their helpful customer support and high-performance drives they’ve managed to capture a significant market share and sell a lot of units. Recently, OCZ’s CEO Ryan Peterson stepped down and was ultimately replaced by the current CEO Ralph Schmitt. Ralph has his work cut out for him as OCZ tries to boost their profitability and reverse the slide of their stock that’s reached record low levels. A difficult task indeed as competition has reached a peak and margins on SSD sales are extremely thin as a result.

Why do I point this out? Because I’m already feeling a change at OCZ (for the better in my opinion) and it’s somewhat ironic that this comes at time when they launch a new drive with the moniker of Vector…as in trajectory or bearing (although we confirmed the naming really has nothing to do with the company’s direction). It’s actually similar to Vertex (the first Indilinx drive) in name and has the same geometry theme. Generally, we receive marketing and/or informational material with our review samples to assist in the review process. The feel of this was bit different than those in the past with a lot about reliability, stability and quality and less about speed, speed, speed. My perception is the focus has shifted from getting the fastest product out as quickly as possible to getting a more thoroughly tested, high quality product out the door. Given the level and breadth of competition out there now, this is surely a wise and prudent direction. To that end, they’ve told us their focus is shifting away from the more value oriented products to the high performance/enthusiast and enterprise products with the highest levels of quality. 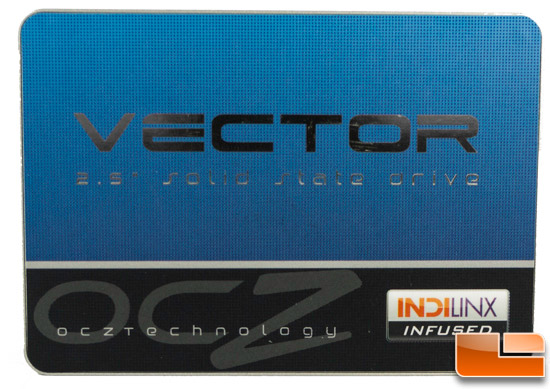 Enough of the background and our observational musings and on with the real star of the show – the new Indilinx Barefoot 3 powered Vector series. If you’re the SSD savvy type, you may know the Indilinx branded Octane and Vertex 4 drives were actually Marvell based controllers with custom Indilinx firmware. Not so this time. The Indilinx Barefoot 3 is 100% OCZ in-house hardware and software. In fact, the entire drive is OCZ fabricated with the exception of the IMFT NAND as we’ll see when we peek inside. The 6Gbps interfaced Vector carries some hefty read/write maximum specifications at 550/MBs and 530MB/s respectively with IOPS to match at 100,000/95,000. Although yet to hit shelves, the MSRP OCZ has relayed for each is as follows: $149.99, $269.99 and $559.99 for the 128GB, 256GB and 512GB drives. 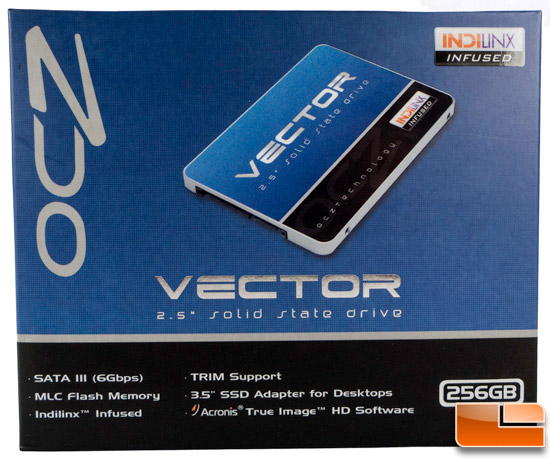 OCZ also changed the design of the packaging and the graphics adorning the drive a bit which helps set it apart from previous OCZ drives. The blue and black color scheme are attractive yet business-like and belies it’s thoroughbred nature. The drives are 7mm in height so there won’t be any issues with fit if trying to drop one in most laptops and ultrabooks. 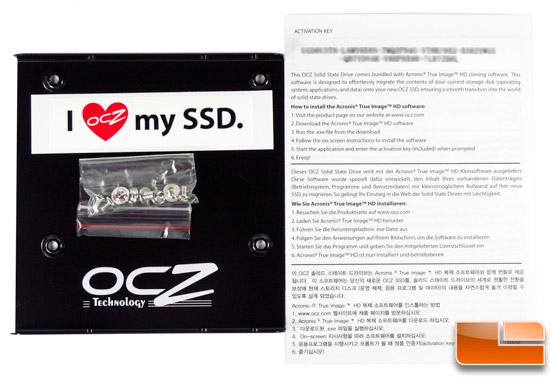 Along with the drive comes the usual OCZ branded 2.5″ to 3.5″ adapter plate, a newly designed OCZ SSD sticker, and a small brochure about the Acronis True Image software complete with serial number.