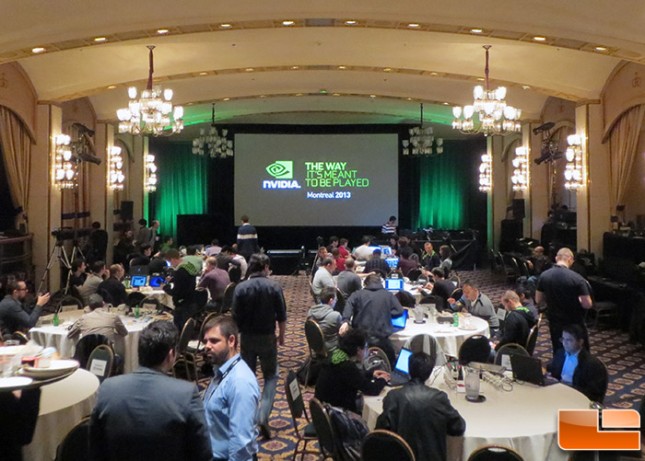 NVIDIA is holding a press conference covering PC gaming this week in Montreal, Canada. NVIDIA made it clear that a new video card will not be announced today, but there is no NDA during the event and that we were free to talk about and show you all of the information discussed. 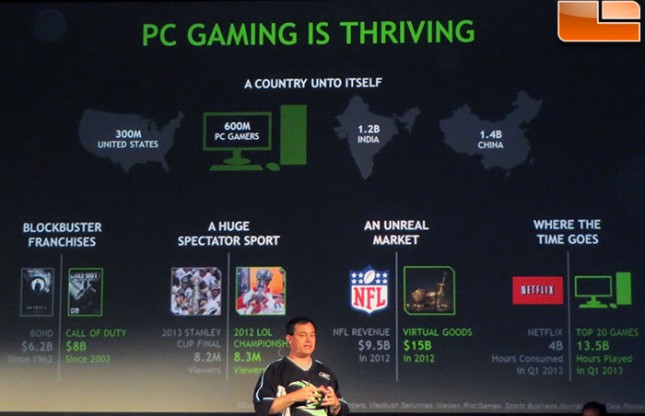 Tony Tamasi, NVIDIA SVP Content and Technology, kicked off the event by talking about how large the gaming industry is. There are 600 million PC Gamers worldwide and the industry is thriving. For example the Call of Duty game franchise has brought in over $8 billion dollars since 2003 and that sum is larger than the James Bond movie franchise since 1963! 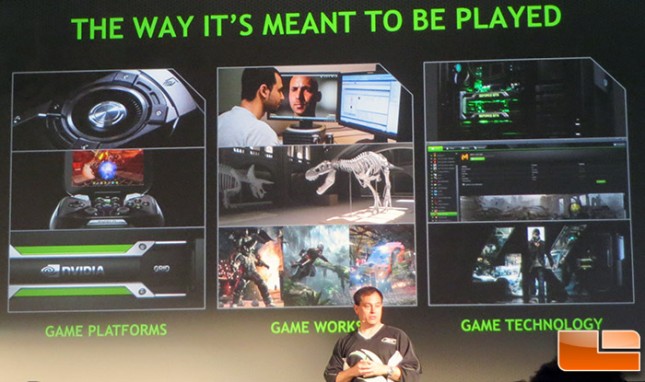 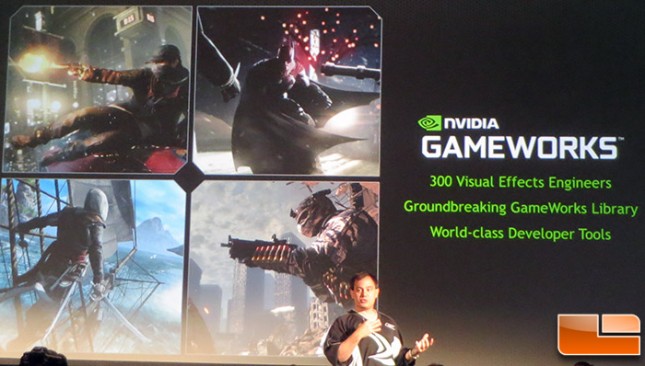 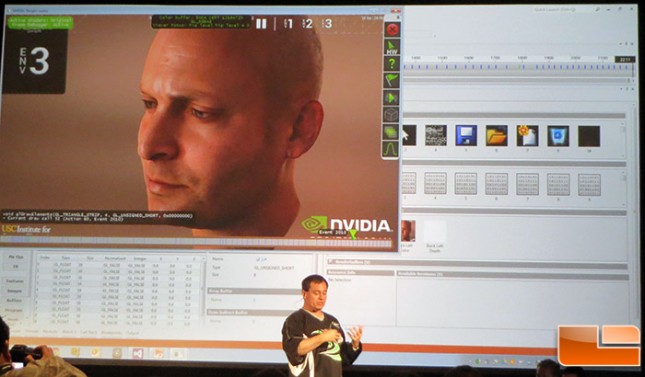 Tony then showed a FaceWorks demo that showed ‘Ira’ being rendered in real-time.  This demo is being run on Linux! This is being run on the Logan SoC devkit that works on both Linux and Windows.  The demo shows debugging working successfully and we are told that Logan is running in single-digit Watts. Project Logan is basically Tegra 5 and the fact that it can run the FaceWorks demo is impressive.  When NVIDIA first showed off FaceWorks earlier this year it was run on an NVIDIA GeForce GTX Titan video card!

A video of a similar demo that was shown in July can be watched above. 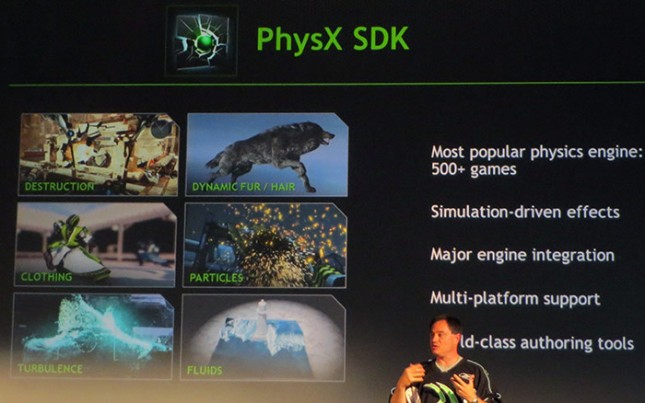 Next up we have the PhysX SDK. NVIDIA says that over 500 game titles now use the PhysX game engine and it is the most popular physics engine used by game developers. 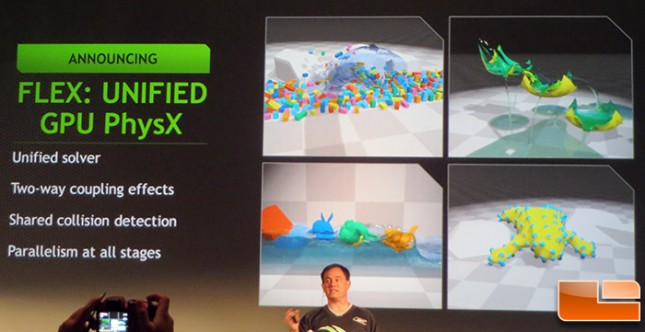 One of the major announcements for NVIDIA today is Flex. Flex is a unified GPU physics system that will be integrated into the PhysX SDK sometime next year. 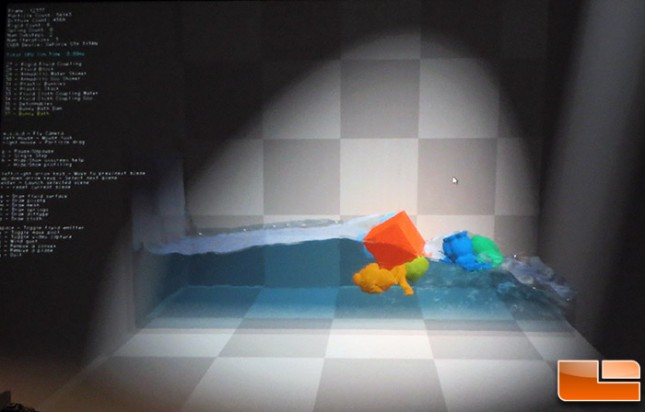 NVIDIA showed a demo of the new Flex system in action that included both rigid-bodies in a fluid that looked good. The demo goes on to include cloth along with the fluid and it again looks good.  NVIDIA says being unified helps developers build and play around with more items in less time. 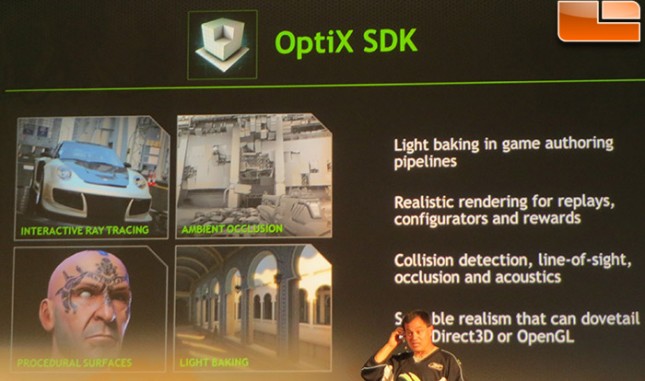 Next up there was a quick discussion on the Optix SDK, which is used by game developers authoring core pipelines. NVIDIA said that Bungie is uing the OptiX SDK to calculate ambient obscurance in future game titles. 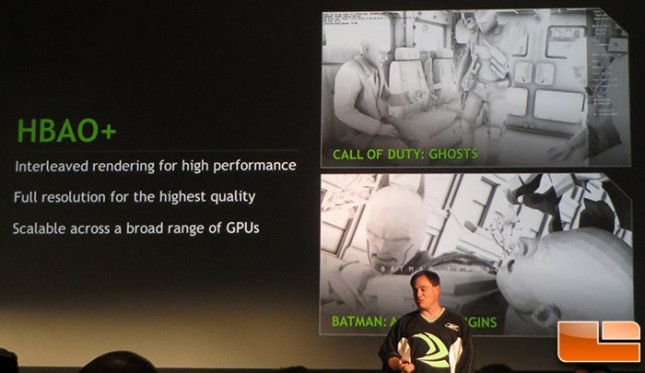 Nvidia’s Horizon-Based Ambient Occlusion (HBAO) technique is up next. The HBAO algorithm can be tweaked to increase realism. An example of this would be to increase the shadow radius to allow larger objects to occlude more. NVIDIA said they they are working how it handles contact-hardening shadows. 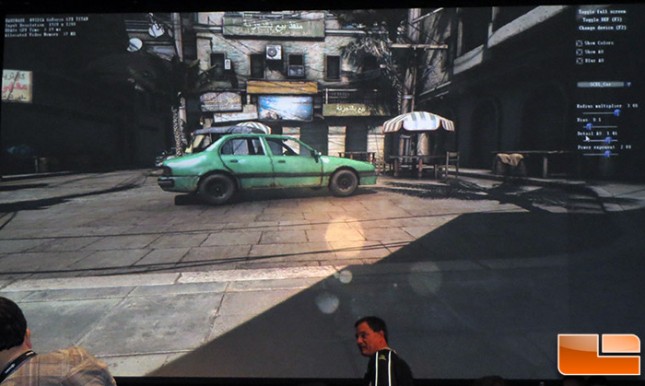 NVIDIA showed a demo of PhysX with a scene that hard a car with a hard shadow under the car and how they can soften the shadow underneath. 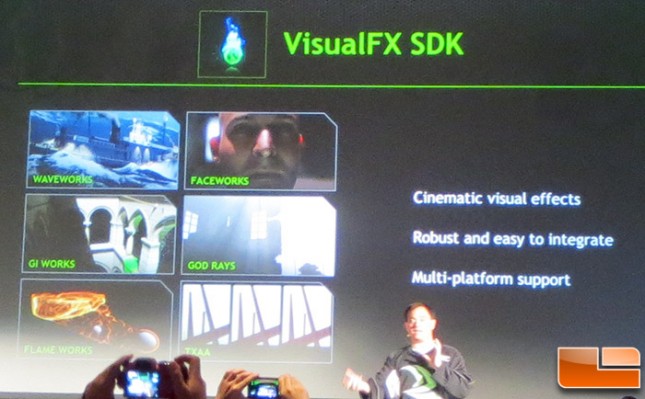 Next up we have the VisualFX SDK that is used for amazing cinematic visual effects. This is basically a turn-key solution that allows developers to combine multiple effects. 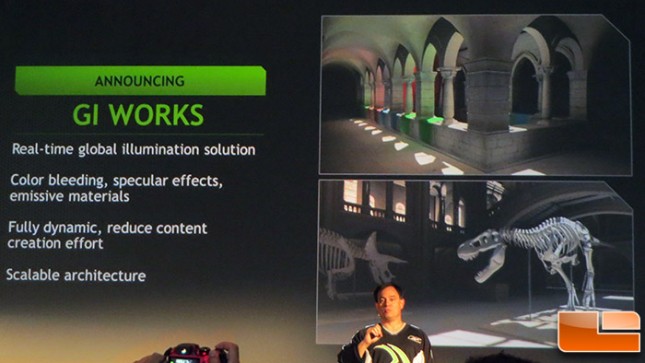 GI Works is one of the new effects and is used for global illumination. NVIDIA says that the GIWorks library will be integrated into games starting in 2014. GI works is said to solve developer issues with shadows and light sources and is cross-platform ready. 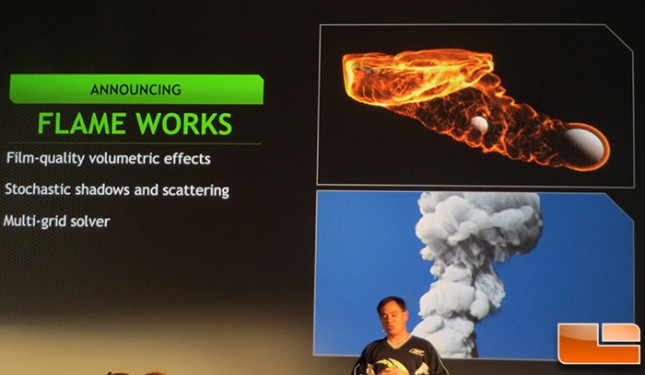 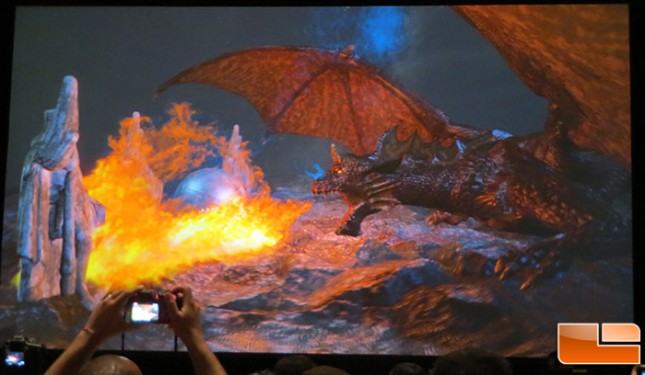 NVIDIA showed a demo of Flame Works that looked amazing.  The demo showed a dragon breathing fire in real-time.

We’ll update this page after we get back from a short break.